END_OF_DOCUMENT_TOKEN_TO_BE_REPLACED

Well, everything except precious metals...
IN A WORLD awash with money, what price the last Leonardo da Vinci in private hands? asks Adrian Ash at BullionVault.
Am I bid half-a-billion dollars? Going once, twice...sold!
Last week saw Christie's in New York sell a painting known as Salvator Mundi for over $450 million including the buyer's fee. Reputedly 500 years old, it was in fact part of a Contemporary Art sale. But that event was perfect for this picture according to more cynical art critics, "because 90% of it was painted in the last 50 years," says Jerry Saltz at New York magazine.
Either way, this "rediscovered" Da Vinci now has great contemporary meaning thanks to its price tag. Fetching a new all-time record for any work of art, Salvator Mundi – depicting Christ as 'saviour of the world' – sold for 50% more than the $300m reputedly paid two years ago by Chicago's Citadel hedge-fund founder and CEO Kenneth Griffin to music-and-media magnate David Geffen for Willem de Kooning's Interchange. It also handed the seller, Russian oligarch and president of Monaco football club Dmitry Rybolovlev, a near 250% gain on his 2015 purchase of the picture.
That deal is the subject of a legal dispute involving Sotheby's, with Rybolovlev alleging that the auction house helped his dealer Yves Bouvier 'flip' the painting to him for $127.5m after paying only $80m. But like Andy Warhol said, "good business is the best art". And if good art also "speaks truth, indeed is truth, perhaps the only truth," as Iris Murdoch wrote roundabout the same time, then the only truth today remains inflation in asset prices.
Two things make the Da Vinci sale "remarkable," says the New York Times. First, it defies the broader trend in old masters, where the market is in fact "contracting because of limited supply and collectors' penchant for contemporary art." Second, "the astronomical sale attests to...the degree to which salesmanship has come to drive and dominate the conversation about art and its value."
Auction-house Christie's itself called the painting "[a] newly rediscovered masterpiece" in the catalogue listing for last Wednesday night's Lot 9B in Manhattan.
Some critics go further, noting the painting's poor condition and "questionable authenticity" – more Salvator Fraudium than 'saviour of the world' in their view.
But value, like beauty, really does lie in the eye of the beholder, and not just in fine art. Hence online giant Amazon trading at 200 times annual earnings, Tesla trading at 4.7 times the value of its 2017 sales (versus 0.7 for hybrid Prius manufacturer Toyota or all-electric Chevy Bolt maker General Motors), Italy's government debt (now worth over 130% of the country's GDP) rising in price to push the yield it offers on 10-year bonds back below 2.0% per year, and Bitcoin setting new all-time highs above $8,000 this Thanksgiving week.
Jumping 11-fold from this time a year ago, the crypto-currency surely marks today's premier bubble.
"Dating from around 1500," says Christie's of the disputed Da Vinci, "[it] depicts a half-length figure of Christ as Savior of the World, facing frontally, holding a crystal orb in his left hand as he raises his right in benediction."
That crystal globe apparently represented heaven to whoever painted it sometime in the last 500 years. But a true rendering of a rock-crystal orb, as critics note, would show the light distorted and inverted.
The ultimate Renaissance man, Da Vinci wouldn't get this wrong, they say. He dissected and sketched the world around him like a scientist.
Ergo, the painting is a fraud.
But what if – instead of a crystal orb – Christ the Redeemer is instead giving his blessing to a hollow globe, not a solid rock?
Maybe he holds nothing but a bubble.
"In the 1970s and 80s," writes currency strategist Steven Barrow at ICBC Standard Bank – also pondering the current meaning of Salvator Mundi this week – "the inflation unleashed by rampant liquidity growth was primarily in goods and services prices, not asset prices.
"Globalisation has [now] managed to supress inflationary pressure in those countries that have conducted QE, and everywhere else for that matter.
"[So] all the inflation these days is in asset prices." 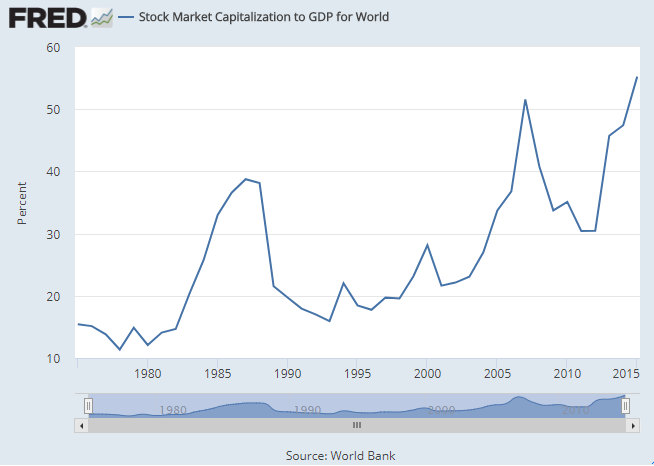 This could change, Barrow warns. First because asset bubbles always pop in the end, but second because moves to roll back globalization – such as Trump's more protectionist policies, or the UK vote for Brexit – "will eventually cause goods and services inflation to reassert itself in a more significant way."
Pending the return of consumer-price inflation, the price of gold, silver and most especially platinum has so far sat out this latest round in the world's multi-decade asset-price bubble. But while historic data are no guarantee of future return returns, precious metals could offer investors some level of salvation amid a financial crash or a surge of inflation. Most especially from today's lower levels.
Because assets not suffering a bubble today are rare indeed.