END_OF_DOCUMENT_TOKEN_TO_BE_REPLACED

Gold and T-bonds top performing assets in GDP slump...
RECESSION starts any day now, writes Adrian Ash at BullionVault in part 2 of this look at gold's investment value in a US economic downturn.
Everyone says so. Everyone except the US Fed. And US millionaires. And US consumers.
More on them in a moment. Because "The US trade deficit narrowed in April as both exports and imports tumbled," says Bloomberg, "highlighting the impact of President Donald Trump's tariffs even before negotiations with China unraveled and he threatened levies on Mexican goods."
"US heavy truck orders are collapsing," adds Wolf Richter at the eponymous WolfStreet.
"Orders for Class-8 trucks...the heavy trucks that haul a large part of the goods-based economy across the US...plunged by 71% in May compared to May last year"
"Adjusted for the revisions and the Birth-Death model," chips in David Rosenberg of Canadian asset managers Gluskin Sheff, backing out the Bureau of Labor Statistics guess-timate of new business creation, " payrolls shrank 65,000 in May.
"Aggregate hours worked peaked in March. Worst first 5 months...since 2009.
"Still don't see the recession?"
If you do, buying gold won't protect your job of course. Nor can silver pay you an income.
But what about Treasury bonds for your savings, or just sticking with stocks? Buy housing?

Over the last 45 years the US has suffered 6 recessions, defined as "a significant decline in economic activity spread across the economy, lasting more than a few months."
Reducing or quitting equities might look wise if you're convinced the current expansion is finished (a period now vying with the 1990s' expansion for the longest unbroken run of GDP growth since the mid-19th Century).
Bonds in contrast did well, most of all Treasury debt. For the rest of the investments above, those 6 recessions showed no clear pattern for inflation or investment.
The pace of inflation rose in the same 3 downturns as crude oil prices rose, and oil shows the highest average gain across all 6 recessions at 23.5% thanks to blowing out in the 1973-1974 Opec embargo.
Silver struggled 4 times, joining stocks in showing a loss on average across the last 6 recessions. Gold averaged a gain of 19.4% and 10-year Treasuries 15.1% overall (including yield). Corporate bonds don't look too bad, but the recession end-dates can mask huge losses during a downturn.
Those Baa bonds for instance, the lowest-rated investment-grade debt according to Moody's, plunged by 17.5% in value during the first 12 months of the 2007-2009 downturn.
Still, while such historical data might offer a guide, trying to position your portfolio solely to avoid or even profit from a recession would mean impossible timing, picking the very start and then the very end.
And here in mid-2019, why worry about recession anyway? Even if we are 10 years on from the last downturn. 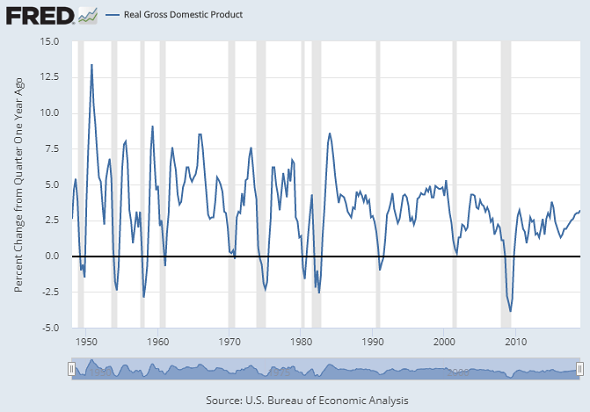 "The chance of a downturn occurring in the next year is just 10%," reports The Economist, citing a new Federal Reserve research paper apparently unveiling the 'Sahm recession indicator'.
Outside the Eccles Building, US consumer confidence has meantime slipped to only a 3-month low so far in June, edging back from very nearly its highest reading in 15 years on the University of Michigan's survey.
Among those consumers, "Americans with $1 million or more in investable assets are [now] bullish on stocks and the economy for the duration of 2019," says CNBC, reporting its latest Millionaire Survey.
Polling a panel of 750 apparently "affluent individuals", CNBC finds "market sentiment of the wealthy has improved since the last biannual survey in fall 2018." These millionaires have in fact raised their outlook for the stock market, and barely 1% of them are allocating anything to gold.
Maybe they'll re-think that when they do start to feel recession has finally shown up.