END_OF_DOCUMENT_TOKEN_TO_BE_REPLACED

How the 1967 devaluation of Sterling killed the Gold Standard...
THIS WEEKEND will mark 50 years since Harold Wilson's infamous devaluation of Sterling, writes Adrian Ash at BullionVault.
Hoping to cut the trade deficit by making imports dearer and exports cheaper, the Labour prime minister claimed that the "Pound in your pocket" hadn't been devalued, only its international exchange rate. Yet the move kick-started a decade of record peace-time inflation which helped make Labour unelectable for years to come.
The Pound's 1967 devaluation is worth revisiting today, because while politicians no longer decide let alone try to defend the value of Sterling, the loss imposed by the currency markets since last year's Brexit referendum is also now showing in the cost of living.
More worrying, the current Conservative Government's infighting over EU withdrawal clearly risks a further sell-off in the Pound as Brexit's March 2019 deadline draws closer. Our trade deficit, meanwhile, has widened to a new record. 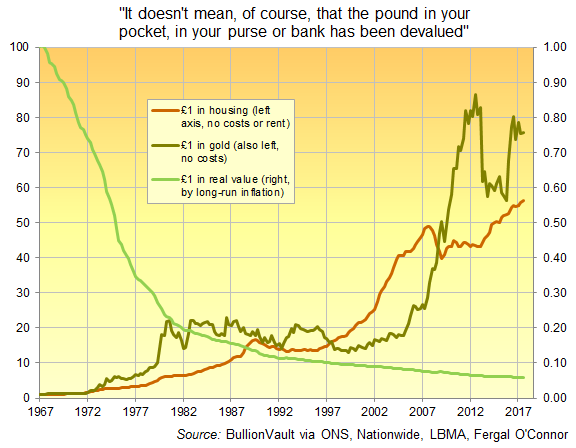 ( Chart with thanks to Fergal O'Connor for the 1967 London fix data.)
Wilson's claim on the evening of Sunday, 19 November 1967 was technically true; each pound was still worth 20 shillings here at home.
But cutting the exchange rate from $2.80 to $2.40 the previous night meant a real terms devaluation for our import-heavy economy. It was also a political humiliation on the world stage, leading then-Chancellor Jim Callaghan to resign immediately.
If Wilson's words weren't quite "the most dishonest statement ever made" as his Conservative opponent Edward Heath said in Parliament the next week, they proved demonstrably false over the next 12 months.
Yes, Labour's 14% devaluation of the Pound boosted exports by 22% in 1968. But the UK's imports bill rose by 19%, negating most of the intended effect and trimming the UK's trade deficit in goods by less than one-fifth.
Inflation in the cost of living meantime jumped above 6% per annum, then its fastest pace in 15 years. It would reach double digits in the summer of 1971, where it then stayed almost without interruption until the double-digit interest rates and deep recession of the early 1980s.
Today the Pound's exchange-rate to the Dollar has nearly halved again from its 1967 devaluation, while its domestic purchasing power has fallen by over 94% according to the Office for National Statistics' long run retail prices series. Patterns and levels of household spending have of course changed over the last 50 years, most dramatically in foreign travel and electronic goods. Like then however, the threat from a fresh drop in Sterling today looks greatest in the cost of non-discretionary items, led by food and energy.
So besides investing in Scotch, what can savers do to get themselves through today's threat of a fresh drop in the Pound?
Gold reacted immediately to the Pound's 1967 devaluation, and not just in Sterling terms. US Treasury Secretary Henry Fowler called Wilson's move "a step into the abyss" for the entire global monetary system. Since the end of WWII, it had kept the Dollar's value fixed against gold, with other currencies then fixed to the Dollar. But the United States' "guns and butter" policies of war in Vietnam plus growing welfare spending at home had meant massive inflation of the money supply, putting the system under acute stress. Growing private investment demand for gold anticipated that was the Dollar's peg at $35 per ounce couldn't hold.
Led by the US, eight central banks had since 1961 pooled their resources to cap the gold price, selling bullion into the London market (then, as now, centre of the world's wholesale trade) whenever the price rose above the official peg. But France had already quit this London Gold Pool, and the remaining seven were overwhelmed by the market's response to Britain's devaluation. Over the following month, the London market handled nine times its normal volume of orders, writes Timothy Green in his book The Ages of Gold. Across 1967 as a whole, the central banks sold 1,400 tonnes into the market, more than a year's global mine output at that time. But the market's appetite at $35 per ounce just couldn't be sated.
Come the following March, just as the Viet Cong launched its big Tet offensive against southern Vietamese and American forces, a US senator gave a speech calling for an end to losing its gold reserves in a futile bid to defend the Dollar's value. Demand leapt again, with extra planes needed to fly US gold into London.
"So much gold was moved in" to the Bank of England's vaults, reports Green, "that the floor of the weighing room collapsed."
The Pool held an emergency meeting in Switzerland, and Roy Jenkins (Callaghan's replacement as Chancellor) then declared a Bank Holiday, closing the London market.
Zurich also shut. Paris stayed opened, where gold immediately traded at $44 per ounce. And when the London market re-opened on 1st April 1968 – without the central-bank Gold Pool and after a two-week shutdown – the price was now quoted in US Dollars, not in Pounds. Britain's humiliation in monetary affairs was complete.
Gold was finally cut free from its Dollar peg in 1971, after then US President 'Tricky Dicky' Nixon caved into the same pressures as Wilson had faced, but this time with bullion as the ultimate anchor he chose to cut loose. The world has since moved to freely floating exchange rates, judged almost universally to be a good thing today. But they might not look so appealing to the saver or shopper wondering what happened to the pound in his or her pocket, purse or bank.
Bullion has now risen 75-fold in Sterling terms over the past 50 years, an even sharper increase than UK property (itself up an impressive 56 times). It continues to offer savers and investors a refuge from financial crisis and economic volatility. It could prove a useful bulwark as the UK's referendum decision forces another seismic shift in our relationship with the rest of the world.
And here's a thought: Lacking any say on who decides Bank of England policy, the UK electorate had endured a decade of zero wage growth in real terms ahead of last year's referendum on EU membership. Savers had also suffered from the Bank's sub-zero real rates and QE money-creation scheme.
Governor Mark Carney aligned the Bank with the main political parties, and repeatedly warned against voting to leave. Among all the reasons pundits have since offered for the shock result, history may say it was the unelected Carney who swung it for Brexit.
Who might they blame if the markets now devalue the Pound yet further as March 2019 draws closer? Policy-makers hoping for a weak-Sterling boost to exports might do well to recall Wilson's 1967 example.