END_OF_DOCUMENT_TOKEN_TO_BE_REPLACED

No, not Nixon and gold. Great Britain and its horrid 'New Pence'...
THIS WEEK marks 50 years since a terrible crime against money, writes Adrian Ash at BullionVault.
No, not Tricky Dicky Nixon shutting the gold window at the US Treasury.
That put the world on a purely fiat currency ever since. But that 50th birthday must wait until August.
No, Monday was February 15th. And so now, even though I wasn't alive...
...(and nor were more than two-thirds of today's UK population)...
...we still recall and lament Britain's currency switch of 1971.
Yes, D-Day was when the old Pound of 20 shillings...
...each containing 12 pence...
...just as they had since Sterling silver coins were first struck in 1183 under King Henry II...
...was abolished and replaced by a Pound equal to 100 New Pence.
Cue much wailing and gnashing of teeth.
"The day Britain lost its soul," said the Daily Mail on the 40th anniversary a decade ago.
Yes really. I swear this isn't a parody.
"Decimalisation signalled the demise of a proudly independent nation," raged the paper's rent-a-lament historian Dominic Sandbrook (born 1974).
Breakfast for one thing. It tasted better when you had to pay 1 and 6 for it...
...making 3 bob for you and your friend...
...plus a tanner for 2 mugs of what people then called "coffee". 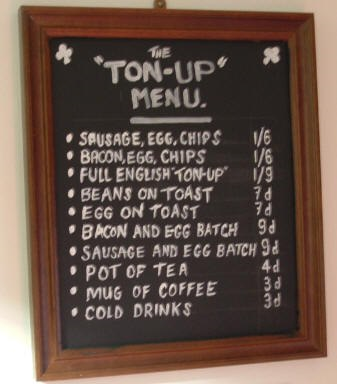 "Pre-decimal currency inspired dazzling feats of daily mental arithmetic, from schoolchildren buying sweets, from shop assistants and transport staff giving change, from punters calculating winnings, from anyone with a complicated order in a pub or a restaurant."

So what if a Decimal Association had lobbied for counting in 10 for almost 130 years? Who cared that "every man who looked at his 10 fingers saw an argument for [decimalisation] and an evidence of its practicability"...?
Business had been calling for it since 1960. The following year's parliamentary committee agreed.
But decimalisation – like the abolition of hanging and the end of men wearing hats in public, all of them, always – was in fact wildly unpopular claimed Sandbrook in The Mail. Indeed, "one of the biggest ruptures in our recent past [was] imposed from on high, the edict handed down by a ­political and intellectual elite indifferent to the romantic charms of history and tradition."
Not that pre-decimal Britain was anti-intellectual, you understand. Far from it! We were then so very clever in fact, we didn't just think in base 12. Or in base 240. Or in a combination of both.
No, our gutsy and proud forebears also invented and used a raft of different nicknames for different sums...
...each of which you also had to be able to count in, too.
"I was born in 1943," says one wistfully, if not in pain.
"The money used in our village was farthing, Ha'penny, penny, thrupenny bit, sixpence, shilling, two bob bit, half crown, ten bob note, pound note and five pound note.
"The crown coin was limited. I don't think there was a five pound coin. I believe the guinea was, still is, just a value and not a coin or note."
Decimal coins, in contrast, "have never inspired any nicknames," as Heller says, "and their abbreviation...P...lends itself only to off-colour jokes."
Worse still, as his parody of Sandbrook's Daily Mail lament goes on, "decimal currency destroyed the will of the British people to resist inflation in the 1970s."
Which is where the joke wears thin. 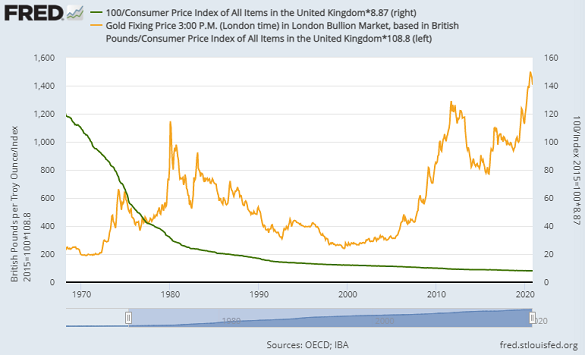 "On Monday, February 15, 1971," wrote Sandbrook in his prezygotic epitaph for Great Britain's greatness, "Edward Heath's government formally abolished the old coinage that had served for generations, replacing it with a new decimal system inspired by Napoleonic France."
He still gets paid for this kind of stuff you know...
"Like so many of the social and cultural changes of the Sixties and Seventies, it was remarkably undemocratic. Nobody ever voted for it; nobody ever asked the British people for their opinion."
Oh good grief.
Our chart tracks the purchasing power of one New Pound from its February 1971 start at 100 New Pence, plus the real price of gold in UK Pounds, rebased against inflation in terms of 2020 money.
It shows the Pound falling steeply in real value, most especially in the 1970s, because while policymakers might have wanted to encourage rising prices, the British people still had to vote with their feet when it came to money.
So just like they were choosing to grow their hair long...
...or wear eye-liner like that Marc Bolan...
...or lust after avocado bath, toilet and bidet suites...
...so they were also borrowing, spending and demanding pay rises to drive the cost of living ever upwards too.
Money is nothing if not "social and cultural". And this underlying inflation had begun long before decimalisation, just like the 1970s' other "social and cultural" yet apparently "undemocratic" changes had also done.
See our chart above. The right-hand axis shows how an Old Pound at its death in 1971 was already worth worth much less than its 1968 equivalent in real terms. That's because, outside of wartime, inflation in the cost of living was already running at historic records.
You could blame Harold Wilson and his 1967 devaluation for that. Or you could accept that devaluation, while sold as a lie, in fact helped give people what they wanted.
More money, both to earn and to spend, without working harder or getting more in return.
Pull our chart further left, and you would see that by then the Old Pound had already lost three-quarters of its domestic spending power since the year 1900 (and it had lost two-thirds of its value in gold, too). Because the great wave of inflation had begun to build even before the First World War.
Gold, as you can also see, jumped in response to the late-20th century's blow-off inflation, but only once it had been freed from the fixed pricing which had previously seen its real purchasing power succumb to the devaluation of money already long under way.
Gold as you can also see then set a new all-time record in UK spending power at last summer's peak.
Which is where things get weird.
"Most historians in the United States are familiar only with one great wave," said US historian David Hackett Fischer in his magisterial 1996 book of that name about inflation, "the price-revolution of the 16th century."
Writing mid-way between today in 2021 and those now ancient events of 50 years ago, "The inflation of the 18th century has been much discussed by French scholars in relation to the revolution of 1789, but it is little known in America or Britain where its effects were less dramatic," Hackett Fischer went on.
"The medieval price-revolution is even more obscure, because it is distant from our time and its sources are inaccessible. [But] the price-revolution of the 20th century is misunderstood for opposite reasons: the data are overwhelming, and the event is so close to us that we have trouble thinking of it in historical terms."
That is now exactly what the 20th century inflation has become.
History. 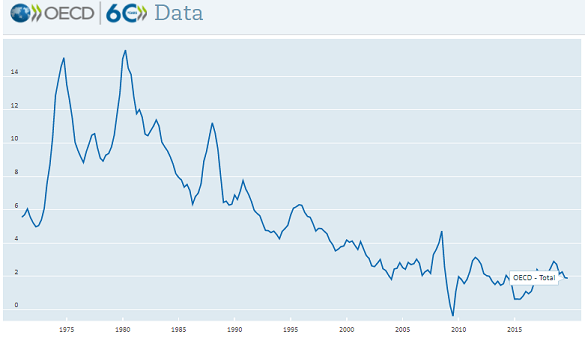 "Price changes and inflation are important topics, and constructing alternate measures of inflation is a worthwhile activity," as one economics blog put it a decade ago or so.
It's also a fact that downplaying the true strength of inflation has strong appeal for political regimes trying to keep a lid on economic if not violent rebellions.
But even if your personal experience jars with the kind of low inflation rates suggested by government economists...by private data projects...or by popular internet forums...you have to accept that inflation today is running much, much lower than it was in the 1990s and '80s...
...never mind during the 1970s of UK decimalisation and the US Dollar being cut free from gold, as our chart above of the average across the developed-world OECD nations shows.
Pricing power didn't vanish out of the blue last year. Factory input and output prices have been slowly flatlining for 10 years or more. Deflation has been a policy worry since the early 2000s.
Covid-19 only deepened this trend (or rather, the economic collapse imposed to try stemming it did). Because the raw materials of everyday life sank in price as everyday life came to a halt.
Copper sank to 4-year lows. Silver slumped to 2009 levels. Crude oil prices briefly went negative. Drillers were paying people to take the stuff away.
But now 2020 is over, so is Covid. Or at least that's what the super soaraway stock market and commodities are betting on. Any kind of rebound is better than last year. Which for investors and traders stuffed full of cash sounds like the biggest and best rebound in history.
Crude oil is back up at $60 per barrel. Silver just spiked to $30. Copper is touching 2012 prices.
The policy response? After the biggest fiscal and monetary stimulus in history, " The time to go big is now," says new US President Joe Biden's Treasury Secretary Janet Yellen. "Get ready to cut interest rates below zero," the Bank of England tells UK lenders.
Maybe this time they'll succeed. Maybe a decade and more of QE money printing and sub-zero real interest rates will finally catch fire and ignite the inflation central bankers are so desperate to revive. Because maybe history does matter, after all.
Maybe the 1970s' inflation was permitted and pursued in the shadow of the Great Depression four decades before.
Maybe whatever social and cultural trends now drive the value of money from here, they will come in the shadow of both last year's hit-the-wall economic crash as well as the 2 decades of declining inflation which preceded it.