END_OF_DOCUMENT_TOKEN_TO_BE_REPLACED

What didn't change in August 1971 was just as important as what did...

"LET ME lay to rest the bugaboo of what is called devaluation," Richard Nixon told the American people on August 15 1971.

The 37th President had just announced the US would "temporarily" close the gold window – ending the convertibility of Dollars into gold that had been a cornerstone of the postwar Bretton Woods system, writes Ben Traynor at BullionVault.

What didn't change in 1971, though, was every bit as important as what did. Because the Dollar remained the world's reserve currency – a "privilege" that, four decades on, looks increasingly like a curse.

When he made his address, Nixon was keen to allay fears he was undermining the Dollar's value by cutting the link to gold – especially given the apocalyptic warnings (both in the press and inside the White House) of how disastrous such a move would be.

His pitch? "If you want to buy a foreign car or take a trip abroad, market conditions may cause your Dollar to buy slightly less. But if you are among the overwhelming majority of Americans who buy American-made products in America, your Dollar will be worth just as much tomorrow as it is today. The effect of this action, in other words, will be to stabilize the Dollar."

Any British viewers that day would have found it eerily reminiscent of prime minister Harold Wilson's "Pound in your Pocket" speech four years earlier. Nothing would change besides the entire monetary structure. And now, back to your scheduled programming with Bonanza (the popular TV show Nixon had delayed in order to drop his bombshell).

Here in 2011, it's now been 40 years since the "temporary" suspension of Dollar convertibility. Has the Dollar been "stabilized"? Clearly not. But what's worth noting is how much faster the Dollar's domestic purchasing power has fallen in the last four decades – freed from gold – than it did in the 40 years before Nixon's announcement.

Of course, Nixon tried to spin his economic reforms – the gold window closure was accompanied by a wage and price freeze and a 10% import tariff – as necessary for "building the new prosperity". The logic was clear. A devalued Dollar, aided by the import tax, would increase America's international competitiveness, while wage and price controls would prevent these policies feeding through into higher inflation.

That, at least, was the plan. As we know, it didn't turn out too well on the inflation front. But higher rates of inflation aren't the only phenomenon we've seen since the early 1970s. The irony is, Nixon hoped to solve another problem by closing the gold window – the US trade deficit.

"The United States has always been, and will continue to be, a forward-looking and trustworthy trading partner," he reassured the world on that fateful August evening. Within a minute, Tricky Dicky announced the 10% tax on imports.

Nixon hoped to improve America's trade balance. Indeed, that was one rationale behind devaluing the Dollar by de-pegging it from gold. But it didn't work: 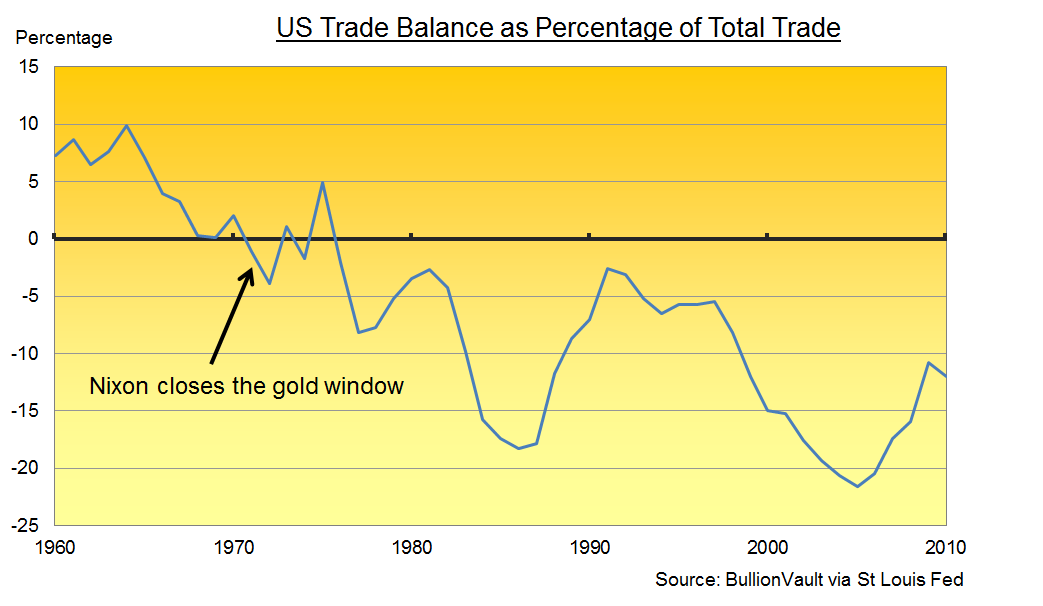 The United States has not run a trade surplus since 1975. It has consistently imported more goods and services than it has exported. Most countries cannot do this for long. They need the revenues from exports to pay for imports.

The US is different, because it issues the world's only reserve currency, which is used to settle most international trade. France's finance minister under president Charles de Gaulle, Valéry Giscard D'Estaing, described this in the mid-1960s as America's "exorbitant privilege" – it allowed the US to fund its trade gap by the creation of new Dollars, in which its imports are still denominated.

With gold convertible for Dollar bills, this "privilege" risked emptying the United States' huge stockpile of monetary metal. But freed from that gold obligation in 1971, isn't the privilege actually still a curse today?

The US was in a tricky position throughout the Bretton Woods era. Its problem was summed up by what became known as the Triffin Dilemma, after Belgian economist Robert Triffin. Because as the global economy expanded, he explained, more and more Dollar liquidity was needed to oil the wheels of international trade. And the US was the sole issuer of Dollars. So the only way the rest of the world could obtain Dollars was by exporting more to America than it imported – all but ensuring the US would run a trade deficit.

Of course, the US could seek to match its exports to its imports – but that risked a seize-up of global trade if foreigners could not get hold of sufficient Dollars to settle their trading with other, non-US parties.

That was one part of the Triffin Dilemma. The other concerned the link to gold, fixed at $35 an ounce. As more and more Dollars entered the system, so the ratio of Dollars to gold increased, putting upwards pressure on the Dollar Gold Price.

The London Gold Pool – whereby central banks clubbed together to keep Gold Prices down by co-ordinated gold sales – was set up in 1961 to address this problem. However, the system fell apart after France pulled out – De Gaulle preferring to swap his Dollars for gold rather than vice versa.

The open market Gold Price rose, accelerating the drain on US gold reserves, as arbitrageurs realized they could swap $35 for an ounce of US government gold and sell it for more elsewhere.

The fixed exchange regime of Bretton Woods, resting as it did on a $35 an ounce Gold Price, was unsustainable in a world of ever-increasing Dollar liquidity. Nixon had three choices – close the gold window, risk setting off a global deflationary spiral, or give away the United States' remaining stockpile of metal. He closed the window.

The Dollar, however, remained the world's reserve currency. This meant the US was now in a position – both at home and abroad – to really go to town exploiting D'Estaing's exorbitant privilege. And looking back over the last 40 years, it looks like that's exactly what successive administrations did.

We hear a lot today about "imbalances" in the global economy. One of the biggest imbalances is that the monetary unit of international trade is issued by a single nation. Gold was giving a strong signal of this disequilibrium half a century ago. Nixon, however, either misread the signals or willfully ignored them. Instead he blamed the Dollar's travails on "international money speculators".

By doing so, he pushed the world onto a whole new monetary system, one whose ultimate backing is the "Full Faith and Credit" of the United States government – and nothing more. It's a worrying irony that a system resting on such "faith and credit" was mid-wifed by the man responsible for Watergate.

Shifting some wealth out of the mainstream by Buying Gold? Discover how you can cut your costs when you buy direct at BullionVault...