END_OF_DOCUMENT_TOKEN_TO_BE_REPLACED

Since gold stopped being money, it's become 75% more valuable on average...

No, he won't sell yet...if ever...says Bill. But gold's huge under-pricing a decade ago has clearly passed by. Value-hungry investors got their "reversion to the mean", and in the form of 400% gains, too. What one ounce of gold bought 2,000 years ago – a good suit of clothes, in Bill's oft-repeated example – it now matches, if not exceeds in price, here in late 2010.

From here, that makes gold a "speculation".

Never mind that, around the birth of Christ, all clothes were hand-cut and sewn locally...rather than glued together by the world's cheapest labor, four or eight thousand miles away. A suitable outfit for visiting the coliseum or agora would have been made-to-measure, too...and today's finest tailors, at least in London or New York, will ask much more than the $1240 you'd raise by selling one ounce at current "Spot Gold" prices.

Never mind all that. Because Bill's point is well made, again... 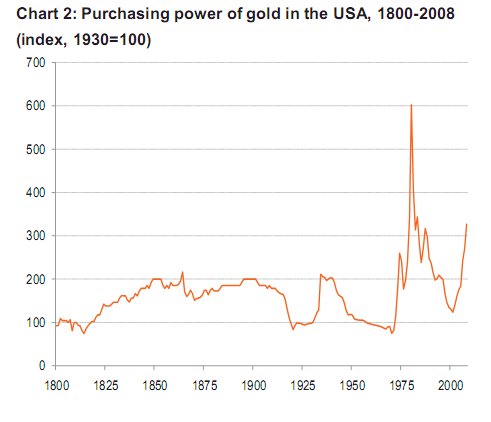 Gold was a screaming buy at the start of last decade, sinking to its lowest price – in real terms – since the early '70s, as the chart above shows (courtesy of the World Gold Council, and taken from Roy Jastram's incomparable study, The Golden Constant).

But "Nobody cared! Nobody was interested," as a (very drunken) London dealer cried at me late last year. "I'd email out jokes, porn-site links, anything to get clients reading so I could repeat three simple words: 'Buy Gold now!'

Today, in contrast, you can't move for anxious investors and bullish hedge funds piling into gold. Or so the media coverage would make it seem. New gold dealers – online and on Wall Street – are meantime sprouting like fungus to catch the "retail dollar", and the story's grown so old, it's even spawned its own calendar for financial hacks (the summer lull, India's post-harvest festivals, quarterly data from the mining-backed World Gold Council, the Sept-end of each year of the Central Bank Gold Agreement). Wherever you look, the only debate that counts – "It must be a bubble, so when will it burst?" – rolls on for what is now more than two years.

As for the dumb lump of metal, yes – it continues to pull in new money, nudging its purchasing power ever-closer to the big top of 1980. But look again at that chart above. For while Roy Jastram saw a "golden constant" in his two centuries of US data (and four centuries of British Gold Prices), the shorter-term volatility is striking. Not least since gold ceased being money 39 years ago, and became mere trinkets and collectibles instead. 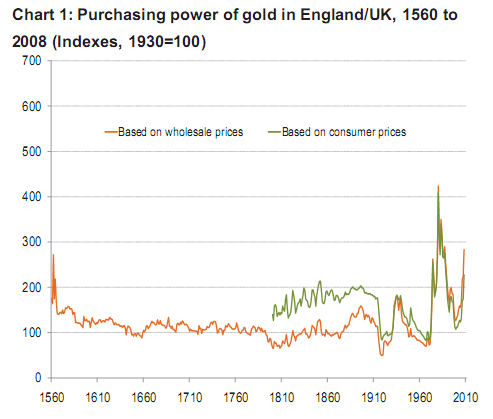 "In terms of what gold will buy, it does not seem undervalued to us," Bill Bonner writes. "As near as we can tell, gold is now fairly priced.

"[So] the reward now is different. It is speculative...not inherent. We cannot expect to make money by waiting for the metal to revert to the mean. It's already at the mean."

But what is gold's mean purchasing power – the "golden constant" of Jastram's peerless research? By our reckoning here at BullionVault today, it has risen sharply since the US abandoned its last pretence of a gold standard and floated the Dollar in August 1971. Compared with the first seven decades of the 20th century, in fact, gold's real purchasing power has stood more than 75% higher on average. Which seems odd. Because without being used as money – its only utility beyond decoration – gold became only more valuable. So while its purchasing power may have looked "constant" across long historical periods from Roy Jastram's vantage of 1977 (and again to die-hard gold bugs 20 years later), its utility had in fact changed.

Gold became more useful as a way of storing purchasing power, even though it was no longer money. Or rather, because it was no longer money, in an age where "Every morning, when you look in the mirror, I want you to think 'What am I going to do today to increase the money supply?'..." as John Ehrlichman, assistant to Richard Nixon, apparently told Fed governor Charles Pardee, sometime in the early 1970s. Post-war economic policy across the West was haunted by the shadow of the Great Depression, and thus flowed from the fear that, unless money was losing value, then spending and particularly investment growth would grind to a halt.

Without the spur of inflation, capital would choose to sit tight – in purses, pockets and deposit accounts – because its purchasing power today would be retained tomorrow. Savers could thus spend (or not) as they chose, rather than being forced to exchange or grow their money to realize or maintain its present value. Devaluing their money, in contrast, via persistent (and obvious) inflation would force savers into the stores and stock-broker's office. And thus today's targets for persistent (and obvious) inflation were born.

"[Harvard professor] Kenneth Rogoff is proposing that the United States use a burst of inflation to get out of its slump," writes Princeton professor Paul Krugman. "I agree...[but] if central banks can gain any leverage at all, it’s only by credibly committing to inflation over a fairly sustained period...[not Rogoff's] two or three years of slightly elevated inflation."

Bill Bonner's bang on the money, in short. Gold from here is a speculation, but a speculation only on academics getting their inside man (whether Mervyn King in London or Ben Bernanke in Washington) to apply their latest hare-brained scheme – massive new money inflation.

What price gold's utility as a store of real value if...when...they succeed?