END_OF_DOCUMENT_TOKEN_TO_BE_REPLACED

How US president Richard Nixon did a "Goldfinger" with the world's stock of gold...

"FEAR, Mr.BOND, takes gold out of circulation and hoards it against the evil day. In a period of history when every tomorrow may be the evil day, it is fair to say that a fat proportion of the gold dug out of one corner of the earth is at once buried again in another corner...
– Ian Fleming's Goldfinger (1959)

FIFTY YEARS AGO – just as the fictional 007 was thwarting Auric Goldfinger's plan to empty Fort Knox and take America's gold to Soviet Moscow – the US Treasury feared a very genuine loss of its real gold reserves.

Gold's role as the ultimate asset of national power was about to peak. By 1966, fully one-half of all the gold ever mined would sit inside government vaults.

Fear put it there. Fear is likely to keep hold of what's left today. 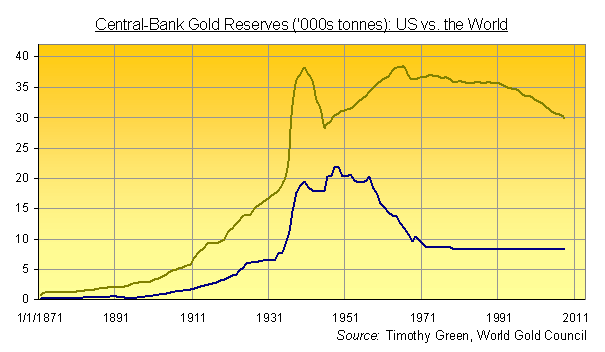 Under the Bretton Woods Agreement – signed in 1944 – the almighty Dollar backed the world's entire monetary system.

Every other major world currency was valued in terms of the greenback, and Gold then backed the Dollar – or rather, it backed 25% of the dollars in issue, as per the Federal Reserve Act.

So it was only by holding either gold or dollars (or better still, lots of both) that sovereign governments could hope to settle their international spending and debts with each other. "Gold and currencies backed by gold [became] the foundation of our international credit," as James Bond is briefed in Goldfinger by Colonel Smithers of the Bank of England.

"We can only tell what the true strength of the Pound is, and other countries can only tell it, by knowing the amount of valuta we have behind our currency."

Sitting atop this system – the "Gold Exchange Standard" as it's sometimes known – the US Dollar clung onto its position as the world's No.1 currency thanks to the sheer size of US national gold reserves. They'd risen three times over between the mid-1920s and the defeat of Japan, hitting more than 20,000 tonnes by the late 1940s.

At its peak, America's nationalized gold reserve – the single greatest gold hoard on earth – accounted for almost one-in-four-ounces ever mined in world history. But "uneasy lies the head that wears a crown," as Shakespeare reminds us, and for most of the Bretton Woods period, from the end of WWII until 1971, Washington lived in terror:

The terror of gold leaking out off US reserves, transferring real wealth overseas and taking the Dollar's position as "top dog" along with it.

Gold vs. the Plutonium-Backed Dollar

"We now have $21 billion worth of refined uranium and plutonium," said a desperate Dwight Eisenhower at a meeting of senior White House officials on 9th November, 1960. "This has great future value as a source of power.

"Could it be substituted for gold," the president asked, proposing a new bed-rock for US monetary reserves – and, therefore, for the world.

Eisenhower's question – though bone-headed and "politely dismissed" as Francis Gavin relates in his excellent 2004 history, Gold, Dollars & Power – was urgent. America's nuclear arsenal already supported its political power. Could plutonium sustain US monetary might as well?

Well...no. "The great thing to remember about Gold," as Colonel Smithers goes on in Goldfinger, "is that it's the most valuable and easily marketable commodity in the world." That still holds true today, five decades later.

Wholesale gold bullion – traded by professional dealers, refineries and bullion banks – represents one of the world's deepest and most liquid capital markets. There is always a "clearing price" at which buyers and sellers will trade. Because Gold's intrinsic value, the fact that it stores wealth in itself – rather than by deferring that value to some other asset, promise or production – is it's only utility.

Industrial and medical uses barely count against the volume of gold held for its wealth-content alone. Whereas money backed by uranium, crude oil, plutonium or copper would be instantly trumped by their value as industrial assets – rare and valuable items, to be sure, but valued for their productive uses instead.

Back to November 1960, meantime, and Secretary of State Christian Anderson had called that White House meeting because government-owned US gold reserves – fixed vs. the Dollar at an unchanging value of $35 per ounce since 1933 – were about to slip below $18 billion "for the first time in many, many years."

The reason? America's balance-of-trade deficit. Rather than accepting US Dollars at face value and sitting on paper in payment, France and Germany kept demanding gold in exchange. That was their right under the post-WWII Bretton Woods Agreement – a right exercised whenever the supply of dollars looked likely to force a revaluation of its gold backing. This right was finally lost when Richard Nixon stopped redeeming dollars for foreign-owned gold in August 1971.

Devaluing the Dollar by 100%

Nixon's decision to float the entire world off gold and onto pure faith alone is often seen as a "crime", an affront to fair dealing and honest money. Nixon stuffed America's creditors, devaluing the Dollar by 100% compared with the promised ratio of $35 an ounce. Runaway inflation then followed as US dollars flooded the world, lacking any "hard asset" backing to limit their growth.

In less than a decade, the gold value of US dollars sank by 96%...pushing the Gold Price up to a peak of $850 per ounce.

But in closing the "gold window" at the Federal Reserve – and destroying the Bretton Woods exchange standard – Nixon was in fact only completing a process begun before the First World War started in 1914.

He locked America's gold reserves deep inside government vaults, safe from the predations of foreign governments demanding hard assets in payment of debt. More crucially in the great arc of 20th century politics, however, Nixon also kept US gold far removed from the private circulation of wealth that had preceding the five decades of "total war" in Europe and Asia...back before those evil days when bureaucrats worldwide moved to close down the free movement of gold, locking it deep inside nationalized vaults, safe from the free decisions of private individuals to move and spend their wealth – in the form of gold bullion – as they saw fit.

"In the Ian Fleming novel," writes Francis Gavin – a professor at the University of Texas at Austin, and a New York Times expert on the Cold War – "the sinister Goldfinger, ably assisted by Pussy Galore, plotted to steal the American gold supply from Fort Knox.

"The movie [of 1964] added an interesting twist to the book's improbable scenario...Goldfinger tells agent 007 that he does not have to remove the gold physically. Instead, he only needs to get inside Fort Knox and install a timed nuclear device supplied by the People's Republic of China.

"The bomb would irradiate all the gold inside the building and make it unusable...international liquidity would seize up, and the Western trade and monetary systems would collapse."

Luckily for the free world, James Bond and Pussy Galore team up at the end of the film to thwart Goldfinger's plan, de-arming the bomb and leaving America's national gold hoard intact. But in reality, Richard Nixon achieved nothing less than Goldfinger's evil scheme in Aug. 1971...and without the fruity charms of Pussy Galore as reward!

The net result? More to come in Part II...