END_OF_DOCUMENT_TOKEN_TO_BE_REPLACED

GOLD PRICES fell near 2-week lows on Tuesday, dropping over $20 to touch $1661 per ounce as inflation expectations sank after US crude oil prices plunged below zero for the first time on record.
With North American storage facilities running out of space amid the worsening Covid Crisis economic depression, oil producers were effectively offering to pay buyers of Nymex May crude oil futures around $5 per barrel by New York's opening today, the contract's last day of trading.
The May contract plunged to minus $40 overnight – down from nearly +$18 at Monday's open – while prices for June, now the 'front month' contract, today fell by one fifth to less than +$17 per barrel. 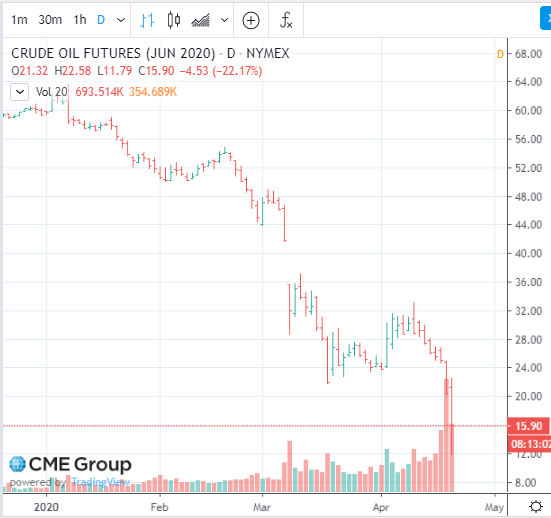 Asian stock markets lost over 2% on average meantime, and European equities lost around 3%, as as the Reuters/Jeffries CRB index of natural resources sank almost 7% for the day.
Major government bond prices rose as commodities and stock markets fell, pulling the annual yield offered by 5-year US Treasury bonds down to 0.31% per annum.
Inflation expectations fell faster however, with 5-year US breakeven rates dropping from 0.67% per annum at Friday's close to 0.50% by Tuesday's New York opening.
Together, that pulled the real rate of interest on 5-year US Treasury debt up from -0.31% to -0.18% per annum, the least negative so far in April and sharply above early March's 7-year low of -0.56%.
Gold prices show a clear and increasingly strong inverse relationship with real interest rates, moving higher as they move lower (and vice versa).
On a statistical basis, the rolling 52-week correlation of Dollar gold prices with 5-year inflation-adjusted Treasury bond yields shows an average r-squared of 84% so far in 2020, up from 46% across the prior 15 years. 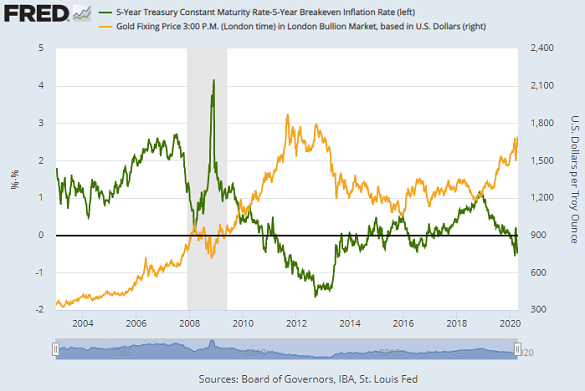 Finding significantly more demand from industry than gold, silver fell harder on Tuesday, dropping 3.7% to $14.80 per ounce, some $3 above last month's sudden 11-year lows.
Platinum prices fell harder still, dropping 7.0% to $725 per ounce – some $150 above last month's virus-crisis plunge to 2002 levels.
Industrial use dominates platinum's annual off-take, with nearly 40% of the metal's end-use coming from automakers needing diesel-engine catalysts.
Sister metal palladium – down 14.4% on Tuesday after crude oil's plunge – finds 85% of its demand from gasoline autocats.
Ahead of gold's price drop, Shanghai prices cut their discount to London quotes to $47 per ounce, suggesting a better demand/supply balance after gold in China – the metal's No.1 consumer market – sank to all-time record discounts of $72 last Friday.
Wholesale gold priced in the Euro today fell to 1-week lows beneath €1540 per ounce – a new all-time when first reached in February.
The UK gold price in Pounds per ounce was little changed above £1355, a new record when first reached in March, as Sterling fell to 2-week lows versus the Dollar on the currency market.
Deaths across the world's 5th largest national economy are running at twice their typical level for this time of time, with many more deaths outside of hospital likely to remain unrecorded in the official UK data so far.