END_OF_DOCUMENT_TOKEN_TO_BE_REPLACED

ETF investing drives 18% platinum price rally so far...
DEMAND to invest in platinum will slash the metal's global market surplus in 2019 according to a raft of analysis published to mark London Platinum Week.
One leading research report in fact forecasts that, thanks to surging investment, platinum will see its first deficit in 3 years, with total supply lagging demand.
With the metal's price rising 17.7% by mid-April from last summer's 10-year low, "A dramatic turnaround in investor sentiment stimulated heavy buying of platinum ETFs in early 2019," says the new PGM Market Report from refining and technology specialists Johnson Matthey, predicting that the global market will move into deficit across this year as a whole.
"Investors were motivated by supply disruption risks and an improving outlook for auto demand," Johnson Matthey goes on, pointing both to concerns over wage disputes in No.1 platinum miner South Africa plus how tighter engine emissions rules for heavy-duty vehicles in China and India will likely boost platinum demand for autocatalysts "over the next two years."
"In the first quarter," agrees Trevor Raymond, director of research at the mining-industry backed World Platinum Investment Council, "we had the combination of rising prices, a downside supply risk in South Africa, and there were several demand growth signals."
Across 2019 as a whole, Raymond's team now see platinum's surplus of supply over demand almost halving from their previous forecast to less than 12 tonnes, with total demand – net of recycling supply – growing 10% from last year to almost 187 tonnes.
Johnson Matthey also forecasts 10% growth in 2019's total demand net of recycling, rising above 196 tonnes on the refining group's data.
Excluding platinum investment however, JM's figure for autocat, industrial and jewelry demand combined comes almost 5% below 2018's level at the weakest since 2012.
Platinum prices that year averaged $1550 per ounce, more than 83% above the current level of $850. 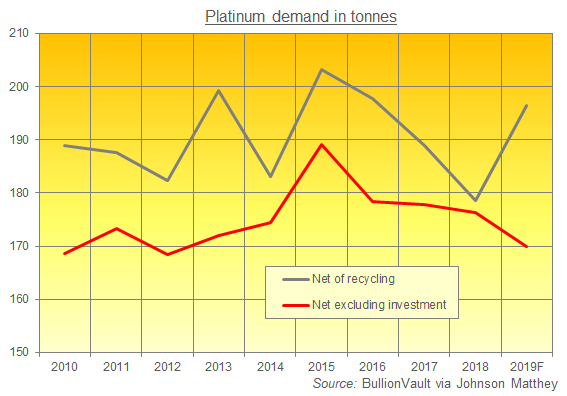 "Platinum's fundamentals are actually expected to worsen in 2019," says the new Platinum & Palladium Focus from independent analysts Metals Focus, "[but] the good news for platinum prices is that it looks like the investor community is no longer as negative."
Pointing to "changing expectations" for US monetary policy as the Federal Reserve puts its interest-rate hikes on hold, there's also a "sense that platinum prices found a floor in the mid to upper $700s" last year, Metals Focus explains.
Sentiment towards investing in platinum was further boosted by "the possibility" of substitution for palladium in gasoline autocatalysts, the consultancy says.
Raymond at WPIC also sees "potential for platinum to be used in gasoline vehicles", and "although there are technical challenges to overcome," says Johnson Matthey, "we think there may be potential for additional platinum use in gasoline applications within a two- to three-year timeframe."
Some 40% of platinum's end-demand use comes from autocatalysts to reduce harmful emissions from diesel engines. The precious metal has nearly halved in price since the 'Dieselgate' scandal broke in 2015, with major car manufacturers now being prosecuted for cheating emissions tests.
Also used primarily in autocats, sister-metal palladium currently finds 80% of its end-demand in gasoline engine systems. It has almost trebled in price since Dieselgate, with total global demand outstrippng supply for the last 7 years running on Metals Focus' data.
The surge in platinum investing between January and March of this year saw the largest quarterly rise in exchange-traded trust fund holdings since platinum ETFs were launched in 2007. That helped create the largest quarterly deficit across the market since WPIC began publishing 3-monthly data in 2014.
Out of WPIC's full-year forecast for 2019 investment demand – the least bullish compared to Metals Focus and Johnson Matthey's predictions – more than 90% already took place in Q1.
"Despite [the] rally [so far] in 2019," says Metals Focus, "platinum's annual average price is expected to slip by 1% to $875, whereas palladium is forecast to enjoy a 45% leap to a record $1490."