END_OF_DOCUMENT_TOKEN_TO_BE_REPLACED

Excess of supply over demand revised 8% down...
DEMAND to invest in platinum has slashed the precious metal's excess supply in 2019 according to a new report, driven by "unprecedented" buying among institutional investors.
Publishing data and forecasts from independent consultants SFA (Oxford), the mining industry-backed World Platinum Investment Council now sees total 2019 demand rising by 9% as "solid investment...more than offsets expected demand decreases [elsewhere]."
The forecast comes as platinum prices – after lagging gold and silver through the first 8 months of this year – have raced to catch up, adding more than 14% in the last 4 weeks alone. 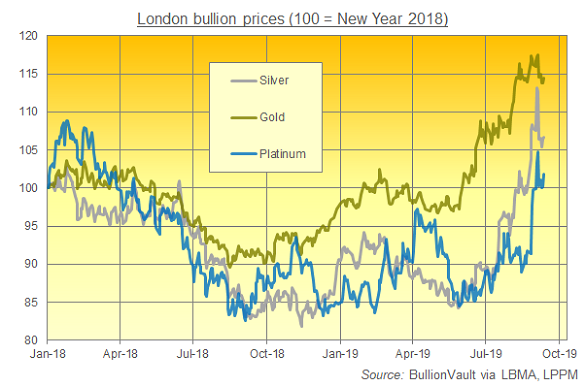 Cutting its 2019 surplus forecast by 8%, WPIC's latest data now predicts a 49% drop in the gap between demand and supply compared to 2018's figure.
This revision comes despite jewelery demand showing a 5% drop from last year, with platinum's use in auto-catalysts to reduce harmful emissions – its single heaviest source of demand – falling 7% in 2019.
On the other side of the market, recycling flows will expand by 3%, and mine supply is now forecast to rise by 5%, encouraged by 2019's high prices for palladium and rhodium – metals typically found in the same ore.
"[This] continued investment demand growth [is] driven by investor recognition of platinum's demand and price potential," says WPIC's CEO Paul Wilson.
"This has been supported by uncertain capital markets that have seen inflows for most precious metals ETFs this year, of which platinum has been a standout beneficiary.
"Institutional investment demand has had an unprecedented start this year."
Also looking at platinum's supply-demand balance however, "The platinum market has stayed in a structural surplus almost every year since 2010," says specialist consultancy Metals Focus in a separate report.
"We therefore see gold remaining the key factor driving platinum prices for some time to come, rather than the metal's own fundamentals...[and] the yellow metal [is] forecast to continue strengthening."
2019's platinum mine output was seen rising only 2% this time last year, as Sibanye Gold (JSE: SGL) said it would rationalize operations at fellow South African miner Lonmin if its takeover bid was successful – a move which made it the world's largest platinum producer in June.
But with the basket price of platinum-group metals setting new record levels in 2019 overall, South Africa's producers "are reaping the benefits of higher prices and a weak currency," says Metals Focus, helping to delay "planned supply cuts" at projects including No.3 miner Impala's Rustenburg operation.
Since acquiring Lonmin in June, Sibanye's share price has risen more than 11%, reaching near 3-year highs at the end of August.
Former No.1 Amplats (JSE: AMS) has meantime gained 17% on the Johannesburg Stock Exchange, reaching its highest since July 2008.
Together, the two largest producers were this week set to ask for mediation in a dispute with the AMCU mineworkers union, after rejecting its demand for a 48% wage hike.
South Africa's mining sector employs 1 in every 50 working-age adults, and they have been hit "particularly hard" by a surge in high-cost, unsecured consumer loans, says Bloomberg.
Two-thirds of South African mining's 450,000 employees now spend "an average 48% of their wages paying off debt," according to fund managers Differential Capital.
"Extreme indebtedness" among miners was among several factors blamed for violent strikes at Lonmin's Marikana project, ended when the police shot 34 dead, seriously injured 78, and then arrested some 250 in August 2012.