END_OF_DOCUMENT_TOKEN_TO_BE_REPLACED

"We saw growth in platinum jewellery in relation to the wedding market in all four of the key markets in 2017. This trend is mostly tied to a strong preference for platinum among younger consumers to express love, together with a robust global economy and historically low platinum prices. This indicates growth potential in the platinum jewellery sector."

In China, the PGI has seen strong growth in platinum sales in the core bridal category. A new tradition of exchanging wedding bands between brides and grooms has helped to drive substantial growth in platinum pair rings. Findings from the China Platinum Acquisition Survey showed that platinum accounted for over 50% of pair ring acquisition.
In India, young couples increasingly see platinum jewellery – by virtue of the metal's durability and strength – as a fitting representation of the modern bond in a relationship between equals.
Platinum already has a strong presence in Japan, holding a 92% share of the engagement ring market and 82% share of the wedding ring market. 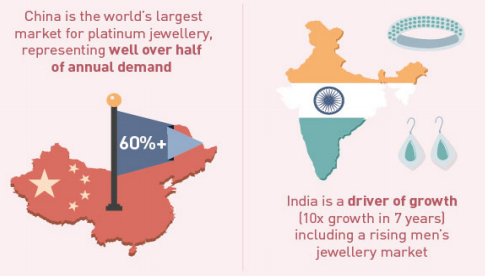 Strong results for platinum in the bridal sector are also mirrored in the West.
In 2017, the US posted its fifth consecutive year of growth in platinum jewellery consumption (up 11% year on year). This trend is set to continue with the increase coming mainly from strong sales in bridal jewellery, including engagement rings and wedding bands.
Jewellery accounts for 32% of platinum demand globally and, in 2018, further growth is expected as a result of the PGI's ongoing initiative, in the US, to promote the use of platinum crowns that hold diamonds more securely.
The Guild is also running a number of collaborative marketing campaigns in new segments and towards new demographics.
Alongside platinum's role as the premier precious metal, it is also an in-demand industrial commodity with broad uses across the medical, manufacturing and automotive sectors. Platinum is also increasingly being viewed as a precious investment asset with demonstrable diversification benefits in a private portfolio or pension plan.