END_OF_DOCUMENT_TOKEN_TO_BE_REPLACED

What would Adam Smith make of the new £20 note bearing his mugshot...?

THE MORE MONEY the world has – 14% more than in March '06 according to one recent estimate – the less anyone wants it.

Putting cash out with the trash makes sense, of course. What self-respecting follower of fashion would want anything that everyone else disdains, too?

The fundamentals don't help. In our world of tiny to negative real interest rates, you'd have to be an idiot to keep your wealth in notes and coins. And only a fool would think he (or she) was getting ahead by keeping cash in the bank...rather than bidding up bricks-n-mortar...stocks and shares...junk bonds in emerging markets...or gold bullion owned outright.

Just try shopping today for a man's wallet that includes a pocket for small change! No one wants the damn stuff. Better to drop your pennies into the plastic cup marked "Thank You" than stuff nickels and dimes into your pocket.

Residential property prices in Northern Ireland, for instance, have risen 45% year-on-year. It doesn't matter where the money has come from; it's wound up on the Falls Road in what used to be considered slum housing.

No matter that two-thirds of Ulster's economy is funded by government programs – rather than private enterprise – or that the province still lacks a viable political settlement to end four decades of sectarian violence. Sinn Fein and its arch-enemy – the DUP run by "Dr No" himself, the Revd. Ian Paisley – are now struggling to pretend they can run a coalition together at Stormont. But the real estate agents don't care either way, and nor do the lenders.

Terraced houses crowded into West Belfast have nearly trebled in price during the last five years. Cross the 'Peace Line' (if you can) onto the Shankhill Road – home of diehard Protestant Loyalism – and two-bedroomed terraces have more than doubled in price over the last 12 months alone. Priced at up to £150,000 ($300,000) according to The Independent newspaper, houses on the Shankhill now draw bidders routinely offering 10-20% over the asking price.

Across the Irish Sea on the British mainland, the cheapest housing in the UK now sits in Nelson and Burnley, near Blackburn in Lancashire's desolate industrial waste lands. These crumbling terraces – all empty, vandalized and boarded up – are due for demolition or arson, depending on whether the government's "compulsory purchase" scheme gets there first.

And with two bedrooms upstairs and only two rooms on the ground, they cost £22,000 according to a recent survey, equivalent to more than $40,000.

Here in England at least, money's physical form is finally giving the lie to its financial worth. Last week the Bank of England issued a new Twenty Pound note. Smothered in so many silvery logos it seems to ape a New World wine that's just won second prize at a tasting competition, the new £20 doesn't even smell like real money. And stamping Adam Smith's mugshot next to the Bank of England's "promise to pay" adds no more credibility than stamping a smiling lion on play money for kids.

"Monopoly...is a great enemy to good management," as Smith wrote in his Wealth of Nations – and central banks hold a monopoly over printing money. Given their lack of good management, how to defend the illusion of monetary worth now that governments and the financial industry alike are doing all they can to destroy it?

Let's flip the globe upside down and ask the central bank of New Zealand.

At first glance, the Kiwis appear to enjoy the same "hot money" problem as emerging economies such as Thailand. There, global investors have been driving the currency higher by flooding the country with money as this story explains.

But the problem for New Zealand is that its own investors and consumers refuse to hold cash over anything else. The Reserve Bank in Auckland hiked its base rates once again this month. The tenth hike in three years, it took overnight yields on Kiwi Dollars to 7.50%, giving New Zealand the second highest rate of interest in the developed world after Iceland – a position it's enjoyed for the last 7 years straight.

Yet still the Kiwis treat cash like an embarrassing friend they failed to ditch during their first year at college!

"Given our relatively high interest rates," said Alan Bolland, governor of the Reserve Bank, in a speech last Thursday, "New Zealand has attracted a disproportionate share of global liquidity in recent years, putting upward pressure on the NZ dollar despite a relatively large current account deficit." 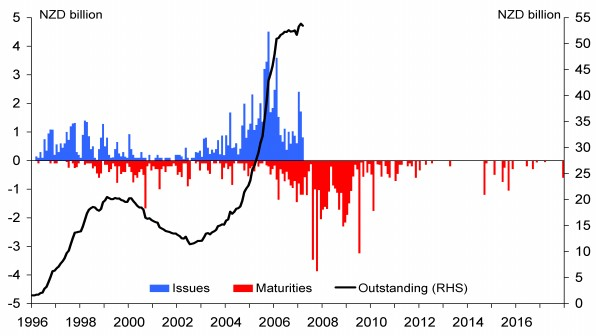 "The upward pressure this has put on the New Zealand Dollar and
downward pressure on [long-term] interest rates," says Bolland, "has
exacerbated the current problematic imbalance between traded and
non-traded sectors in New Zealand."

In plain English, financial assets have soared, but the real economy
has sunk. In 2006, New Zealand racked up the 15th largest trade deficit
in the world. Not bad for a nation of just four million people. (The US
came top, followed by Spain and then Britain.)

New Zealand's also got a max'ed-out housing market and a bubble in
consumer-credit. Its currency looks over-valued on any kind of
fundamental basis. And sitting atop this must-have collection of "haute
finance" springwear – as worn by all of the most fashionable
Anglo-Saxon economies this year – you'll find an inverted yield curve.

Just as with Sterling, US and Australian Dollars, it's now cheaper per
annum to borrow New Zealand's money for repayment five years from now
than for repayment in 2008. The bond market doesn't believe rates will
stay high, in short. So why bother hiking?

"There's increased skepticism that the combination of high rates and
the high currency will be sustainable," reckons John Body, head of
financial markets at ANZ National Bank in Auckland. "It could lead to a
slowing of the economy and so we could see the exchange rate go down."

"New Zealand's growth is skewered to the downside and that has sucked fresh buyers from the kiwi," says Body.

But most problematic of all, however, is what's going to happen when
all those Euro-Kiwi and Uridashi bonds reach maturity. Tokyo and
Frankfurt investors alike will need to redeem the bonds with Euros and
Yen. And to raise that cash they'll need to sell New Zealand Dollars.

New issues of Uridashi and Euro-Kiwi bonds peaked at the end of 2005. A
two-year play on the free profits between New Zealand rates and the
low-yielding currencies proved most popular. So redemptions are set to
peak at the end of this year.

Okay, the "free money" gap has since widened out to 700 points. That
might help create fresh Uridashi and Euro-Kiwi bonds for a while. But
when confidence in the New Zealand Dollar finally catches up with the
hard facts of New Zealand's own cash-hating economy, something's going
to give.

We guess it won't be the price of gold measured against the Kiwi currency.