END_OF_DOCUMENT_TOKEN_TO_BE_REPLACED

Money is, like, eugh! So let's wrap it in plastic. Or better still, ban it entirely...
EXCITEMENT and outrage keeps building on the bug-o-sphere about the secret plan to abolish cash, says Adrian Ash at BullionVault, waiting to paw a brand new 'clean' Fiver for the first time.
Not heard that one? It's not really so secret. Academics, economists and policy-makers have openly talked about killing off physical money since the 2008 financial crisis. Because, well, that would really get you out shopping and spending, right?
This year's fresh madness of negative interest rates in Tokyo and Frankfurt just makes the idea more urgent – even if, so far, negative rates only apply to commercial banks' own deposits at the Bank of Japan and the European Central Bank. And even if – so far – the appliance of NIRP has done less than nothing to boost bank lending or economic growth.
But if households and business faced the same certain loss of 0.1% or 0.4% or more per year on their bank savings, they would surely choose to spend! Spend! SPEND! instead, according to the theory. Or they could simply sidestep the policy – and escape its intended effect of urging savers to spend – by withdrawing all their money as hard cash instead.
Unless hard cash...say the £5 or $1 or €50...didn't exist anymore.
"The ECB has no intention to move away from physical money," said ECB chief Mario Draghi in a letter to one worried European politician earlier this summer.
"I would like to underline that the decision [to cease circulation of] the EUR 500 banknote is not aimed at limiting cash."
Yikes – an official denial! Followed by another from the Bundesbank too!
But away from central-bank schemes for a "ban on cash" however – imagined or denied – a slow death for physical money is much plainer to see.
Indeed, one key driver has spurred the latest innovation in physical cash for UK savers and shoppers...
...the plasticated £5 note, now ready for its launch this week by the Bank of England.
You can fold it, crush it, put it through the washing machine...take it on a day trip to the Isle of Wight...or just immerse your New Fiver in a tank of bubbling water if you must...
But still the damn thing will be impossible to fold into your wallet or purse. And it will still only be worth a fiver. 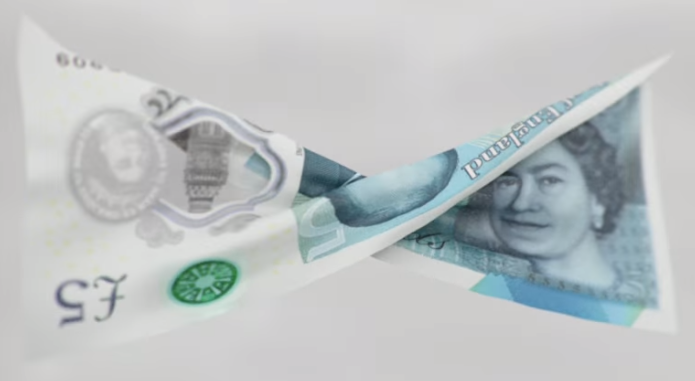 What it won't be is "dirty". Whereas the world's current paper notes are filthy. As in, like, eugh!
"Money, be it coins or notes, harbors very large numbers of bacteria," said one scientist in a lab coat to a horrified mass media recently.
"It is something that we all share so it passes through many many different hands, washed and unwashed.
"It also gets kept in warm and moist pockets, which offer perfect conditions for bacterial growth and survival."
Couldn't using silver coinage solve that? And what kind of bacteria anyway?
Well, how about Staphylococcus aureus... known to provoke acne, boils, even infection of the heart, blood and lungs? Or the vicious stomach bug E-Coli? Or even the flesh-eating MRSA...?
Okay, so Staph is pretty much everywhere else too, from your phone to your laptop, door handles, tables, chairs, and one-in-every four of everyone you meet. And the other two killer pathogens only turned up on cash when a different lab-coat deliberately sprayed them onto a test sample of banknotes, and then timed how long the bugs stayed alive.
At least, that's the only such finding we can turn up via the magic of Google today. But you get the point: Money is filthy. Everyone says so.
Especially the Bank of England.
"The New Fiver – Cleaner, Safer, Stronger" it declared across the launch jamboree.
Why put cleanliness first? (Disputed, by the way. So-called "wipe-clean" polymer notes "appear to provide the best conditions for bacteria to survive and could help spread bacterial infections" found another study. Naturally, yet another lab-coat found the exact opposite.)
The Dutch National Bank listed 3 other criteria for good bank-note paper – secure, durable, printable – when it mused on the topic in 2002, almost 30 years after polymer threads were first tried. But it did also note "hygiene" as a growing interest amongst note issuance managers.
Why? Money-fueled epidemics haven't, as yet, made the headlines anywhere we can find. What's the worry?
Well, "we know that viable bacteria are on money and could serve as a mode of transmission for antibiotic-resistant genes," said the biologist leading New York University's 2014 Dirty Money Project.
More telling, and without irony:

"Money is a frequent route of contact between people in New York City."

Let's leave Wall Street and Times Square out of this for a moment. Because contact through money might seem less dirty than contact without it.
But that's why coined money was reviled and railed against by early Christians, then the English Diggers... Karl Marx (even as he scrounged money off Engels to play the stockmarket)...Zionist kibbutznik...hippies (before they decided to make it rich)...armchair crusties...and a handful of Bernie Sanders' fans.
In this reading, money gets between people, rather than connecting them. It stops us relying directly on each other to repay the little gifts we receive. Because with coins, notes and bank transfers, we can each repay what we owe or spend the favors we accumulate with somebody else, anyone else, entirely unrelated. Which abstracts the gift from the giver, and quite literally destroys the "commune" in community.
Until the birth of coinage in contrast ( roundabout the 7th century BC in each of Greece, India and China), we had to muck in together with a small, local network of mostly near-family...sharing favors and produce, heat and security, and sharing in the misery when resources got tight as well.
I borrow your hammer, you marry my daughter, we kill your pig to make sausages for the reception – that kind of thing, with all the mish-mash of values and prices which post-monetary brains cannot get past.
No one in the village got to keep count (and small communities were pretty much how everyone lived, even in cities, because passing strangers don't extend or return favors or gifts) because even where counting had been invented, what hadn't been dreamt up was a way of accounting apples as oranges or cattle in terms of an hour spent keeping your neighbors' fire alight.
Sure, as in every close family relationship today, that no doubt meant everyone secretly did try to keep count, comparing what they gave against what they got back, and using resentment as an abacus for age-old slights grown fat with the magic of compound emotional interest. But it took money to make keeping score clear and demonstrable.
Before then, you might be owed a bit more, or get a bit more, than you'd earned from everyone else. But sharing and shrugging at the imbalance was just how things worked if you wanted to get along with the world.
We're a very long way off that pre-money Eden today. Knee-deep in filth, crime and danger according to the spotless money push bringing us the #newfiver this week here in the UK.
How to get clean? More to come...much more...with the leap to contactless cash in Part II...