END_OF_DOCUMENT_TOKEN_TO_BE_REPLACED

Trying to beat zero rates at home? Go nuts with the FX version of money illusion...
YOU'VE no doubt heard of money illusion, says Adrian Ash at BullionVault.
People tend to see changes in prices only in cash, not in real terms. So any rise or fall in fact masks inflation in the cost of living.
You think your investments are doing better than they are. You think your wages must grow if you're to enjoy a pay rise. All thanks to money illusion.
The noflation of early 2015 makes money illusion less of a risk for investors. The zero per cent headline rate reported for both UK and US consumer prices this week means that, whatever a UK or US investor's nominal returns, they made the same in real terms too.
But with inflation AWOL, and the money illusion now absent, UK and US investors wanting to boost their returns face another risk – FX delusion.
The Times of London last week quoted stock-brokers and other salesmen advising UK savers to "pick Europe or Japan" if they're thinking about overseas investments.
Yes, really. Apparently there is "greater upside potential in Europe" but Japan also has "an accommodative central bank."
No kidding. The Bank of Japan is so "accommodative" that it is now printing more QE money in 2015 than even the government in Tokyo can borrow. 120% of gross debt issuance this fiscal year, to be precise.
Whether or not this means hyperinflation sometime in the future, it certainly means a much stronger stock market right now. The flood of QE cash pouring out of the central bank keeps spilling out of the bond market into other Japanese asset prices, even Tokyo land and housing.
The trouble with Japanese assets, however, is that they are priced in Japanese Yen. That might make them look "cheap" with the Yen trading down at 6- and 7-year lows on the FX market. But for overseas investors, it also means that stock-market gains to date – plainly driven by the Bank of Japan's kamikaze QE – have been pretty much negated by currency devaluation. Because as the Nikkei share index has risen, so has the number of Yen it takes to buy back your own currency should you want to take profits.
Here is the delusion laid bare. 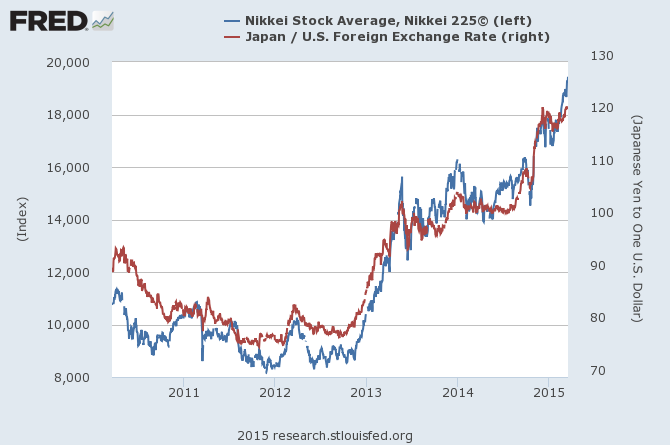 Over in Euroland, stock markets have meantime been hitting fresh 7.5-year highs. And so they should. Because the European Central Bank is finally following Japan...pouring €60 billion per month into financial assets.
Trouble is, Eurozone corporate earnings – the money which listed companies are actually making from the business they do – haven't risen anything like as fast as share prices.

Returning 140% to investors since the financial crash bottomed in March 2009, Eurozone equities as a group have seen their price/earnings multiple rise some 230%. That is a triumph of hope over reality according to Albert Edwards, strategist at French investment bank Societe Generale.
Because it means investors have rated the shares ever more highly, getting ever fewer cents of earnings for each Euro of price.
So how about sticking with US stocks, or switching there if you're a UK saver? Domestic investors can side-step FX delusion entirely, and non-US buyers might get extra gains thanks to the rising Dollar as well. But with the US currency already surging 15% over the last 12 months – faster than anything outside the Lehman's meltdown of late 2008 or the Volcker Fed's attack on inflation of the early 1980s – today's interest-free version of the "Super Dollar" might itself need to pause. And as for equities, Wall Street has now enjoyed the longest run of gains since WWII, with the S&P 500 rising 200% since QE began and the market bottomed in March 2009. That's the third biggest 6-year change ever, just behind 1929 and 1999, says Edwards.
Famously, those bull markets "did not end well."
Panicked in 1930, however, investors fleeing the stock market crash at least found 4% annual yields offered by long-term US Treasury bonds. Y2K's tech bubble refugees found somewhere even nicer to hide in 2000, with 10-year Treasury yields offering 6.5% per annum (that's nominal. Real yields held around 3%. Money illusion eh? ) Whereas today, yields on US bonds pay barely 2% per annum gross (scarcely 0.4% real) while German yields are "at negative levels even beyond a 5-year maturity," as US fund manager John Hussman notes.
Crazy is as crazy does. So with Eurozone bond yields now below zero, even Japanese government bonds are now looking attractive to some European fund managers.
Yes, really. Bond yields fall when bond prices rise. Here's a chart of Japanese government bond yields. 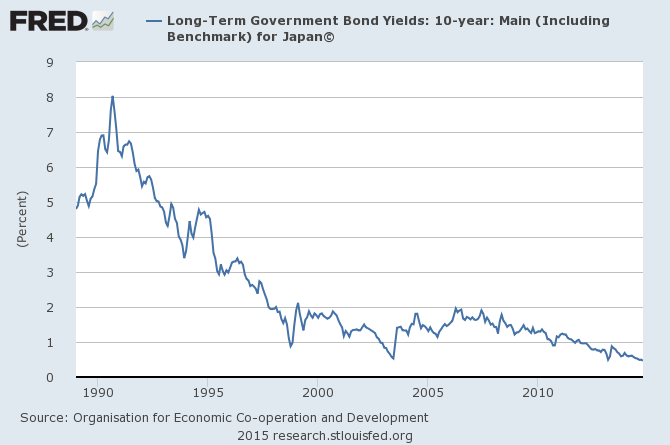 Good grief...
So, you might ask, what's our own brand of snake oil here at BullionVault...?
None of the above, of course – not the over-extended US stock market, over-priced Eurozone, FX delusion of Japanese stocks, or the 'safe haven' delusion of government bonds now trading at such high prices that investors are buying a guaranteed loss thanks to negative yields (nominal. Adjusted for what little inflation there is, the real yield is lower again).
Nor do any of those things, however, mean that managed money must pour into gold or silver any time soon. And even when the stock market tumbles, gold and silver still pay you no interest, remember. Which is why your financial advisor hates them. And if the stock-market does fade from these new global peaks, lots of salespeople from lots of stock-brokers and asset management firms will find lots of other things to recommend instead.
But to reverse what John Dizard at the Financial Times wisely noted way back in 2007:

"Years of high return on risk capital go with years of low returns on gold."

Those years of high stock and bond-market gains are getting pretty long in the tooth. It is also now three long years since gold and silver began their 35% and 70% drops.