END_OF_DOCUMENT_TOKEN_TO_BE_REPLACED

To the golden barricades, comrade...!
The IMPACT of the French Revolution? asks Adrian Ash at BullionVault.
Two centuries after 1789, "It's too early to tell" said Chinese premier Zhou Enlai at a meeting with US president Richard Nixon in the early 1970s.
What a wag! Those bureaucrats in Beijing sure take the long view of history.
But thing is, Zhou in fact thought the question was about the French strikes, protests and street violence of May 1968...
...making his comment sound much less clever.
And if Zhou had waited just a few years, he could have said exactly what May 1968 achieved in the end.
A big fat zero.
Communism collapsed, capitalism won. Even in China.
"Getting rich is glorious," said Zhou's successor Deng Xiaoping in the late 1970s (or maybe he didn't).
The only big surprise today is that, while replacing pictures of Chairman Mao with Jack Ma, Beijing has kept its totalitarian control of the Chinese people and politics.
As for May 1968's revolutionaries in Paris, those wannabee Maoists and anarchists were so poetic even their slogans wore berets, slugged apricot cocktails and chain-smoked Gauloises.

"Beneath the paving stones, the beach...!
"Read less, live more...
"Boredom is counterrevolutionary..."

Here again, history doubles over, crying with laughter.
Because those posters – hand-printed by radical students at the École des Beaux-Arts – have become collector items for wealthy baby-boomers and their boomed-up babies.  And today's biggest 50th birthday events for les grands évènements de 1968 are a global series of exhibitions all leading, of course, to the gift shop.
Why did May '68 prove such a damp squib?
"We must find a way to mobilise the workers," urged Tariq Ali – then the Oxford-educated son of Pakistani nobility and now a Highgate-mansion millionaire – in hilarious footage from this BBC documentary presented by the equally cut-glass Joan Bakewell.
Radicals both high and lower class have long wanted to get the workers to help overthrow their masters. The Levellers tried it in 1640s' England. Angry anarchists tried in the 1980s. If the revolutionaries could only get "the working class" on board, as one Scottish socialist told a court trying him for sedition in 1918, they'd be "more dangerous to capitalists than even the German enemies at your gates."
Fifty years after that, on the other side of the slaughter of World Wars 1 and 2...amid the booming welfare state built to say sorry...and with the horrors of Soviet and Maoist Communism all too clear to see...the working classes were already undergoing a revolution.
But instead of uniting to overthrow the bourgeoisie, the workers of the world rose up to join them.
People much preferred this revolution to digging up cobblestones and throwing them at the police. It offered to make everyone a little capitalist, whether saving and investing in property (your own home, maybe a buy-to-let apartment) or by owning the means of production (stocks, shares and mutual funds).
By the late 1960s, US households already owned almost one-third of the US stockmarket directly, with their retirement savings swallowing much more besides. Home ownership among British families meantime doubled from below 30% to nearly 60% by the turn of this century.
We all became bourgeois, even if ever so petite. But maybe not for much longer...and thanks to the very same boom which the May '68 generation and the children of their revolution have enjoyed. 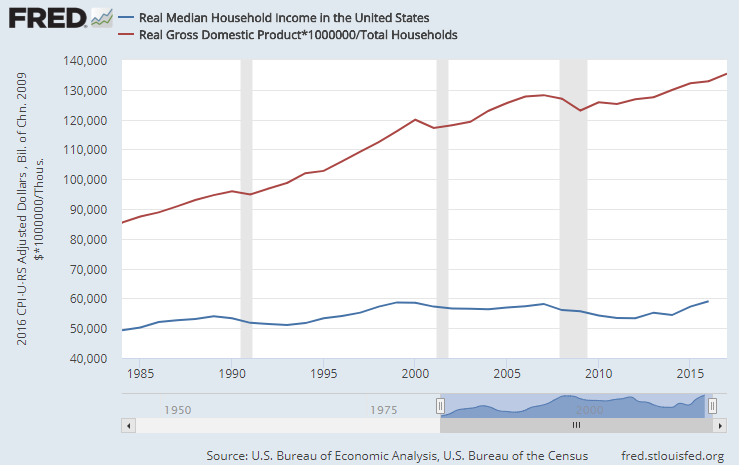 Adjusted for inflation, and divided by its total number of households, the US economy has grown by 45% over the last three decades.
How much of that growth came from the boom in financial assets, trading and profiteering we'll leave for another day. But only $1 in every $7 of that growth has actually gone to those households in terms of average income. Families right in the middle of the range have seen their real pay barely change since the turn of this century.
The richest 1% have meantime come to own as much of the United States' private wealth as the next richest 9%...which is about two-thirds larger than all the wealth belonging to the other 90% put together.
Across the Atlantic, the same story, only with a clear generational kicker. Because since the Berlin Wall fell in 1989, real disposable income for working families in the UK has risen 42% on average. Among retirees it has more than doubled.
Buying the average UK home meantime costs 8 times the average annual wage, a fresh all-time record nearly twice the pre-crisis level of 2007. So home ownership rates have of course gone the other way, falling back near 50% since the global banking collapse, while one in three millenials "will never be able to afford to buy a home" according to a rash of recent UK headlines.
So far, no revolution. Even in France, voters have chosen that real go-getter Emmanuel Macron to take on the unions and face down the 2018 vintage of angry students.
But underpinning the long boom in asset prices...and slowly undermining the democratization of capital it accompanied...another and more important revolution from Spring 1968 is going little noticed in the papers and online right now.
It is 50 years since the big central banks of the Western world stopped trying to keep the price of gold at $35 per ounce. That marked the beginning of the end for the US Dollar's final gold backing, thereby cutting the world free from gold in turn.
And cut free from any reference to value, money has seen a revolution perhaps as great as its first invention in the 7th Century BC.
History offers several causes for the Spring 1968 crack in the gold market, from the devaluation of Sterling to the Tet offensive in Vietnam.
But taking the very long view, as one US professor noted last week, " Fort Knox is the reason we don't have a gold standard."
The rush to war of the early 20th Century, followed by the semi-socialist societies built afterwards, first made the free circulation of gold coin impossible, and then made a fixed price for money in terms of gold or anything else ridiculous.
Bubbles in pretty much everything have followed. They are growing increasingly fast and increasingly massive. Some 30% of UK homeowners now couldn't afford the current price of the home they already live in. Donald Trump's big cuts to corporate tax rates have simply fueled a boom in stock options granted to top executives.
It's obvious this can't go on forever. But it's also clear that it might continue for much longer yet, with or without a return of class resentment and violence.
As for today's much-touted revolution in money, Bitcoin and other crypto-currencies have no government and no law behind them...taking us one step still further from the old certainty of gold and silver.
"There is something going on here that is generational," reckons one US regulator.
"Just as the baby boomer generation lost faith in the leaders that came before them and tried to seek a cultural change in those days through sex, drugs and rock and roll, I think there is a generation that also has lost faith in us that led them through the financial crisis and they see technology as a way of disintermediating institutions for which they don't have a great deal of respect."
Well, maybe. It's still a very capitalist revolution if so.