END_OF_DOCUMENT_TOKEN_TO_BE_REPLACED

Why this really isn't the early '80s recession replayed...

WHATEVER the problem is, a lack of money it ain't. Just so we're clear. Quite how more money might help, therefore, we can't say. 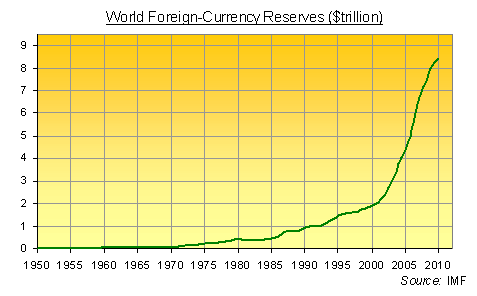 Still, that won't stop the world's No.1 central bank from creating yet more of the stuff. Not according to Ben Bernanke last week, nor to anyone listening or watching the Federal Reserve since America came round from his first stab at money-creation.

Instead of punching adrenaline through the chest wall again, Dr.Ben's more likely this time to put up a drip (so analysts think), flushing $100 billion or so into the system each month, and reviewing America's vital signs before changing the bag every quarter. Either way, the problem for retained wealth – meaning your savings and pension...if not (just yet) the money you hold from pay-day to month's end – is trying to second-guess what Dr.Ben's patented deflation cure will do when there's no money-deflation to cure.

Sure, the Fed can create money. But it can't create credit (from the Latin credere, "to trust, have faith"). And it sure as hell can't let America's outstanding debts – both private and public – simply get written off now, neither at home nor abroad. Not after all that crashing and banging in ER from 2007-09.

So never mind the record-large cash pile sitting at non-financial corporates. Never mind that their problem is too much debt, not the $1.8 trillion in cash they've already got. Never mind the 50-fold growth since 2007 to $1 trillion in US banks' cash holdings either. Again, debt is their problem – not a lack of money – but it doesn't matter. New money is the only fix Dr.Ben now has to hand (he's all out of interest-rate cuts). So those foreign reserves, US corporates and domestic banks already drowning in money will get flooded with more.

This, if it weren't for America's debts, would surely mean runaway inflation in prices. But there is all that debt, gnawing away on every spending decision. Hell, even US households have been re-building their cash savings...tucking away a total of $6.3 trillion by end-June, over a quarter more than they held in deposit and checking in 2005. But even after paying down debt at a record pace (2.2% annually during the April-June quarter), that still leaves a near-record volume of household debt outstanding ($13.5 trillion) with consumer leverage also squatting near historical highs – only just shy of the pre-crisis peak.

To date, the retrenchment in gearing-to-income also lags the pace of retrenchment during the early '80s, although it is approaching a similar proportion... 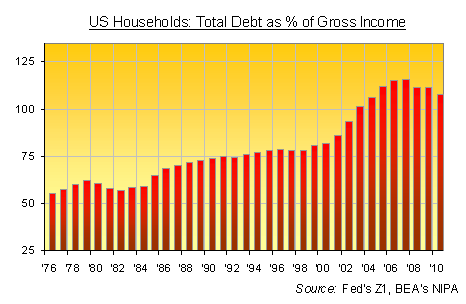 Still, a lot continues to separate today's retrenchment in household leverage from the retrenchment of 30 years ago...

That last point is the clincher, of course. Because where America's outstanding household debt has actually fallen this time around ($13.45 trillion from $13.84trn), it continued to grow at the start of the '80s ($1.576trn from $1.276trn), even as leverage fell between 1979 and 1982. Inflation in both prices and income did the heavy lifting back then. It's buckled, in contrast, since 2007.

Over the three years to end-1982, inflation ate nearly quarter of the debt which US households already owed at the start of that period. It would need to average more than 8% per year to achieve the same feat in three years today. But instead, the official Consumer Price Index rose by little more than 1.3% last month from Sept. '09.

Even if inflation had been stronger, US households would still have needed stronger wage growth to get any benefit. From 1979-1982, personal incomes rose by 34% in nominal dollars, resulting in a real pay rise of 5.6%. Added to the impact of inflation on the burden of outstanding debt, that enabled consumers to expand their nominal borrowings by nearly one third while still cutting their gearing-to-income from 62% to 57%. Today, in contrast, US personal incomes (handily annualized by the BEA's latest quarterly stats) have risen just 4.7% since 2007 – a mere 0.7% ahead of inflation (again, on the official CPI measure, and yes, still with three months of the year to run). So the current delevering has had to come almost entirely from paying down debt.

This, in short, is not the early '80s recession replayed (y'know, the one when gold, oil, stocks and bonds all sank together), much less the 1990-92 recession or 2001 slowdown. (Consumer leverage leapt as the Tech Stock Bubble collapsed; what kind of "recession" was that?) The slump of the last three years (and counting) benefits from neither inflation or wage growth. Debts must either be paid down from static incomes, or be written off by forgiving lenders. Devaluation isn't coming to help. Not yet at least.

But hey, that's why they invented the Fed, right?

Gold Investing made simple, secure and low-cost at world No.1 BullionVault...