END_OF_DOCUMENT_TOKEN_TO_BE_REPLACED

Know your ASM from your FCEV and HQLA...?

WHAT ONCE was piled high and cheap is now running out fast at much higher prices, writes Adrian Ash at BullionVault.

Time, for instance. Like everything else that showed a record glut during lockdown, it's suddenly in very short supply.

So after failing to post our notes on GoldNews last week from the LBMA conference, we have started sharing them in our Weekly Update emails to clients.

Much more to come for them. But for today, the big theme?

From the LBMA itself (and the LPPM for platinum-group metals) to ASM in mining...

...RGG and RSS and AML in the supply chain, to NSFR and HQLA in banking rules...

...through to ICE engines and their BEV and FCEV replacements...

...the conference was no place for acrophobia.

We'll unpack some of this in a moment.

Before that, the big news on price.

Here you can see the 12-month price forecasts from attendees of the London Bullion Market Association's 2021 virtual conference.

BullionVault has tracked and reported this annual guess-timate many times over the decade-and-more we have been attending as members.

Those forecasts have, on average, proven a little more right than wrong. Roughly speaking.

And as you'll know if you followed BullionVault live on Twitter during the 2-day sessions last week, people working in the wholesale precious-metals market now think, on average, that prices are set to rise from here...

...led a massive 38% rebound in platinum between now and October next year.

In a separate question however (from the live polling during last Monday's investment session) silver was picked as the biggest winner. So that would suggest the platinum bulls are very bullish...

...pulling the conference's average platinum price forecast much higher between them.

Lagging on both polls, however, was its sister-metal palladium. Conference attendees predicted it will be little changed a year from now, continuing to trade one-third below this May's new all-time high.

Why so down on palladium? Thank the biggest acronym starring at this year's LBMA-LPPM conference.

Which means, specifically for platinum versus palladium, the global switch to green energy. 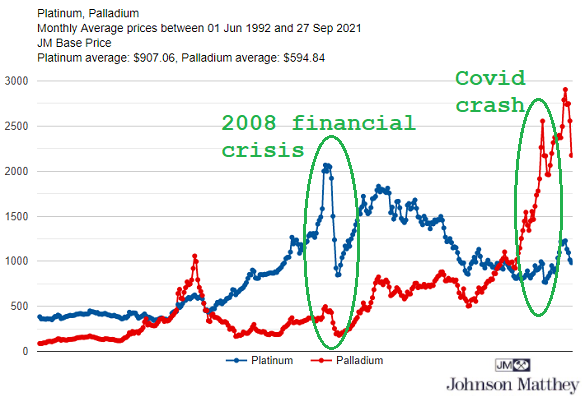 Palladium, like platinum, finds its single largest use as a catalyst in fossil-fuel exhaust systems.

That helps reduce hydrocarbons and other harmful emissions from your car, truck, bus or digger.

But unlike platinum...which has already slumped since 2015 thanks to the Diesel scandal over auto-makers cheating the rules...palladium doesn't currently have any other major uses to speak of beyond its role in gasoline-engine autocats.

That role itself is already losing its edge, because much cheaper platinum is...according to the consensus I heard and found chatting to other delegates last week...now being substituting into gasoline catalysts by automakers wanting to save money on the hybrid cars they produce.

So where platinum already enjoys solid demand for jewellery and investment, plus a range of other strong and growing industrial uses...

...not least a vital role in green-energy fuel cells for turning hydrogen into electricity...

...palladium looks doomed long-term by the death of the internal combustion engine.

Cue a clanging bell, perhaps, for contrarian-minded investors. You may be reminded of the death of gold in 1999, the death of tobacco stocks in the early 2000s, and the decline of the Dollar as the world's No.1 currency pretty much every time you go online...

(...a dominance which the Dollar continues to enjoy however, as top monetary economist Barry Eichengreen noted again to the LBMA conference last week.)

Either way, and with platinum miners also being palladium and rhodium miners as well thanks to the way that geology works, the South African industry is "very encouraged" by signs of the hydrogen economy developing into a serious addition to Earth's green-energy future, alongside battery-electric vehicles.

Oh sure, we've heard it all before, said one mining executive at last week's conference.

But policy support from government is now, finally, starting to make a difference. And so while "you can drive a truck through forecast ranges" for where analysts think fuel-cell demand might reach in the next 5 or 25 years, the "perfect storm" for platinum prices will be substantial switching from fossil fuels into this growing technology, plus strong inventory drawdown from the stockpiles of unwanted metal built up over the last few years.

Further ahead, those stockpiles risk running low. Because even a strong price response might not offer enough "tension" for platinum miners to make substantial capital investment in the near term.

They remain fixated on building stronger balance sheets, rather than taking (what they still see as) a risk on building capacity to meet the potential demand from hydrogen fuel-cell vehicles.

Upshot? What was once piled high and cheap might very soon start running scarce and expensive.

Which takes us, for today's Update, back to fossil fuels.

The switch to green energy is the "greatest transformation of the global economy in our lifetimes, maybe the greatest ever."

The trade-off is between the physical effects of climate change or "transition risk", he said.

By which Hildebrand and pretty much every other speaker meant inflation.

"What's ahead is a profound tectonic shift of capital. It's hard to think of any business that won't be affected."

...something we looked at in these Weekly Updates earlier this month.

And so, while the longer-term promise of solar, wind, tidal and hydrogen energy is for cheaper power in the future, the immediate impact will require both massive capital spending here and now plus insane quantities of fossil fuels to make and install all this new technology.

"I agree it's inflationary," said investment banker and emeritus professor at Gresham College, London Avinash Persaud, nodding along with the blunt consensus from investors, analysts, economists and (nearly) everyone else speaking at last week's LBMA precious metals conference.

You may remember those phrases from the global financial crisis of 2007-2012...

...back when privatized profits, banked ahead of the crash, became socialized losses when governments and central banks dumped the cost of rescuing the financial system onto taxpayers and 'austerity' budget cuts.

Only now, governments are asking the world to work the other way, stumping up for policy decisions in a way we haven't seen since Europe's post-WW2 wasteland sprouted the welfare state, built for "the common good" with record-high taxes on the wealthy.

This time around, we all have to pay. Starting with the jump in energy prices already hitting consumers across Europe before autumn has even begun.

"Gold in any period is a good yardstick for such macro-economic shifts," said Joachim Nagel, dialling in from Basel as deputy head of banking at the Bank for International Settlements.

"I try to see consensus" and invest alongside that, agreed Persaud. A stronger recovery stronger means inflation will be higher, and that should be good for gold.

Either way, everyone (and I mean everyone) agreed that Western central banks really can't and won't raise interest rates to anything like a meaningful level, no matter what they might suggest about wanting to fight that inflation.

Debt burdens are simply too great to bear it.