END_OF_DOCUMENT_TOKEN_TO_BE_REPLACED

Which is handy, cos few others are...
THANKS no doubt to someone smoking something to celebrate the Red Sox winning the World Series last night, the gold industry gathered here at the Boston Park Plaza got woken by a false fire alarm at 5am Monday, writes Adrian Ash of BullionVault.
Is this month's steep rally from the summer's 21-month lows in the gold price also a false alarm?
"The macro-economic signals all look pretty bullish for gold" said ex-Bank of England policymaker and now president of the Peterson Institute for International Economics Adam Posen in this morning's opening sessions. (Or words to that effect according to our illegible notes.)
"More uncertainty encourages everyone to prefer hard assets. Inflation too favors gold and the other precious metals. More political fragmentation reinforces this move. Low global productivity growth also reduces speculative gains on other investments."
But we've all been here before, if not in Boston. Every London Bullion Market Association conference of the last 5 years has kicked off with a macro-outlook stressing geopolitical risk, over-indebted governments, and zero to negative interest rates.
Gold prices have stuck in a range regardless, failing to reach $1400 per ounce while holding – so far – above the 2013-2015 crash low of $1045 so far.
Still, the wider consensus – outside of what the global gold, silver, platinum and palladium market pays to hear – may now also be turning.
Posen for instance is much more worried about an uptick in inflation, starting first-half 2019. That slower productivity growth, plus the higher cost of living now baked in the crust by Trump's trade war, mean the economy has "less room to run hot" before prices go up.
Colleagues of his at PIIE who formerly saw nothing to fear in Italy's debt-to-GDP burden are now "seriously worried" by Rome's coalition government, because its fiscal plans lack credibility and its key politicians are also deeply skeptical on the Euro currency.
"The Euro is not something you can leave," countered Isabelle Strauss-Kahn, formerly of the Banque de France – meaning no doubt that it would prove a disaster, rather than the Eurozone wouldn't let you. Besides, a recent poll found two-thirds of Italians support staying in the single currency added Gabriel Glöckler of the European Central Bank. But again, "It is irreversible" he said – a hostage to fortune if not a ransom demand from Rome's Lega-M5s government.
2018's return of Italian bond spreads to the financial headlines has coincided with a marked upturn in central-bank gold demand. Having cut its overall gold holdings up to the start of the financial crisis, Europe this summer saw the first central-bank purchases so far this century as first Poland and then Hungary announced they were buying.
After all, "Physical gold is nobody's liability," as Peter Peter Zoellner of the Bank for International Settlements said Monday morning.
"In times of credit risk and geopolitical problems it has proven a solid asset, less correlated [with stocks or bonds] and not exposed to the financial sector.
"This lesson has been learnt by investors over the past 20 years."
What's more, "Many central banks can't hold negative yielding paper," Zoellner went on. Notably, that means they're excluded from buying Eurozone government bonds with any maturity as far out of 7 years. 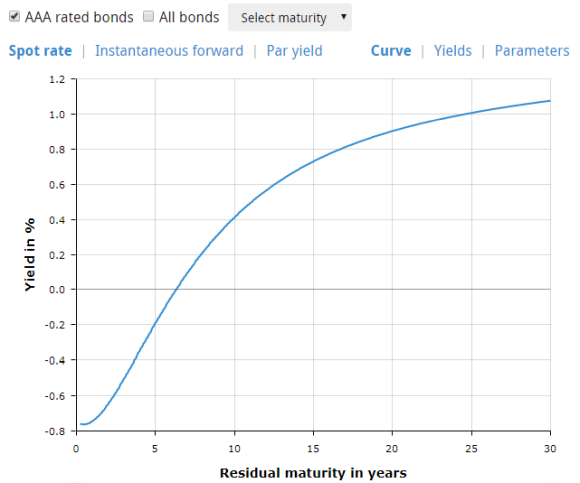 Today's low-to-negative interest rates worldwide cut the opportunity cost of holding gold. They also make gold a stand-out "safe haven" compared to the "deeply negative rate" offered by Swiss Francs.
Central banks have of course long held physical gold as a key asset. Ray Testa of the New York Federal Reserve noted this morning how – at its peak – the US central bank was caring for 12,000 tonnes of gold bullion on behalf of governments and other official-sector agencies at the peak of 1973. While it's still holding some 6,500 tonnes, the NYFed has been overtaken by London's bank and commercial vaults (not that Testa noted it) and the total has "declined steadily" since the end of the Bretton Woods gold-backed Dollar exchange system through both selling by central banks overall and also thanks to "geopolitical rearrangement".
Germany for example famously shuffled its gold bullion holdings around recently. Other West European nations have "repatriated" some or all of their national gold holdings too. But where those developed economies never suggested they didn't trust or like the Fed, the gold-buying policy of Russia clearly looks a challenge to the United States' dominance of global FX reserves and payments systems. And now other, more eastern European nations are buying a bit too, citing "independence" and "security".
Posen and Zoellner agreed that FX reserves and payment systems aren’t the same thing. Buying non-USD assets doesn’t mean a country can deal with a sanctions-hit country. Because it still needs to use US-dominated payments systems.
"When asked about the use of the Dollar payment system as a sanctions tool," tweeted World Gold Council strategist John Reade from the conference room this morning, "Adam Posen made the point that it is one if the very few sanction tools that really works. It raises risks and could escalate so it must be used judiciously."
Yes, Trump was never far from LBMA 2018's opening sessions, turning the last 3 decades of globalization and consensus economics on its head. Rising geopolitical risk and rising inflation make more central-bank gold buying look wise, if not certain.
Music to the gold industry's ears perhaps. Because as no one has (yet) mentioned on stage, "In a gold market struggling from too much supply and not enough demand," as Macquarie's Matt Turner noted of the current 6-year record in central-bank gold buying, "[it] has been a lifeline...the only unambiguously positive sector at the moment."
Next up the outlook for investment demand. Live updates on Twitter @bullionvault – and more news, comment and analysis to come on GoldNews soon as we get chance.