END_OF_DOCUMENT_TOKEN_TO_BE_REPLACED

Just how hard is it to beat deflation – that horror of falling wages and prices...?

And the Japanese government – how can the Ministry of Finance in Tokyo dish out enough free money to put an end to deflation, that horror of falling prices and wages? 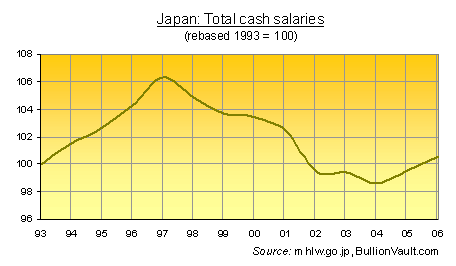 "Envelopes containing ¥10,000 bills ($82) and well-wishing notes have been discovered in municipal toilets across Japan," reports the Associated Press, "baffling civil servants and triggering a nationwide hunt."

Curious, don't you think? The anonymous well-wisher has left money in men's rooms in 15 prefectures in the last month. Each package of cash comes with a handwritten note: "Please make use of this money for your self-enrichment."

After studying the handwriting, the authorities are seeking an elderly gentleman or men – and do we really need any more proof that this free money comes as a gift from the Ministry of Finance (MoF)?

After a decade of falling incomes, such desperate remedies might just start to appeal to any government. As crazy reflation schemes go, it's no more bizarre than throwing freshly-printed Dollars out of a chopper or burying old bottles stuffed full of cash in disused mine shafts.

What's more, all the Japanese "drops" have so far been made in government buildings. But what a pity this scheme hasn't worked; according to a report in Le Figaro, all the free cash has been handed straight to the police! But that's the trouble with a genuine currency slump. You can't even give money away when the whole country is bent on destroying its value.

The Ministry of Finance in Tokyo printed and spent $400 billion selling the Yen between 2000 and 2004. Since it gave up, the entire Nippon nation has begun selling the Yen on margin. Forex account balances in Japan have risen by nearly two-thirds from last summer to total ¥613 billion today – nearly $5 billion. "Leveraging typically makes their positions 10 to 30 times larger," says the Financial Times, and what the MoF struggled to achieve with $400 billion of short sales, private investors are now doing with a quick click of a mouse.

Total Yen sales by private individuals in Japan outweighed the volume of professional betting against the Yen recorded at the Chicago Mercantile Exchange by the end of last month. 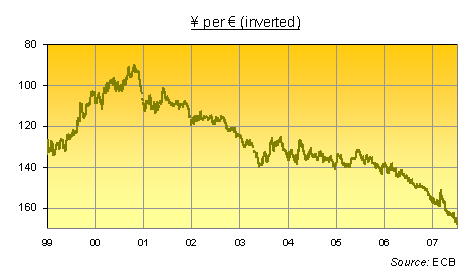 Mr. and Mrs.Watanabe's profits from selling the Yen might just be a taste of the short-sale gains yet to come – or so everyone thinks. And whether you're game to join in the world's biggest ever "one-way bet" or not, the Yen's ongoing decline at least shows just how debased ALL currencies have become over the last three and a half decades.

The collapse in Japan's interest rates only served to put a ceiling at ¥84 per Dollar. Fresh out of interest-rate fire-power by the end of 2001, the Bank of Japan then had to actively sell Yen to cap its currency at ¥102 per Dollar in late 2004. 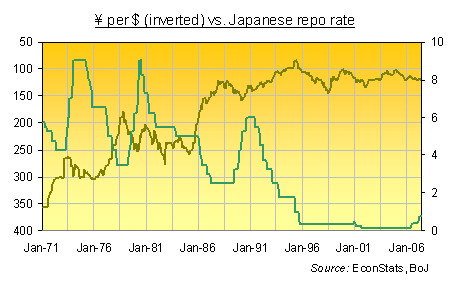 Put another way, destroying the Yen by destroying its yield proved mighty tough with Bernanke and Greenspan in charge at the Fed. And with $686bn in excess foreign currency reserves now stacked up today, perhaps the only route left to beating Japan's ten-year deflation really is to leave banknotes in rest rooms – and advise the finders to "seek self-enrichment" with gearing.

"If the Treasury were to fill old bottles with banknotes," wrote John Maynard Keynes – the brains behind the Bretton Woods exchange-rate system – "[and then] bury them at suitable depths in disused coal mines which are then filled up to the surface with town rubbish, and leave it to private enterprise on well-tried principles of laissez-faire to dig the notes up again (the right to do so being obtained, of course by tendering for leases of the note-bearing territory), there need be no more unemployment and with the help of the repercussions, the real income of the community, and its capital wealth also, would probably become a good deal greater than it actually is."

Was Keynes joking? No more than Ben Bernanke in his famous speech entitled Deflation: Making Sure "It" Doesn't Happen Here. Speaking as the Tech Stock Crash leached into consumer spending in late 2002, the current Fed chairman tipped his hat to Milton Friedman's idea of "money dropped from a helicopter" to stimulate an ailing economy.

Bernanke's speech bears revisiting now that US retail sales are tanking once more – driven this time by the collapse in home sales and prices. He went on:

"Like gold, US Dollars have value only to the extent that they are strictly limited in supply. But the US government has a technology, called a printing press (or, today, its electronic equivalent), that allows it to produce as many US Dollars as it wishes at essentially no cost. By increasing the number of US Dollars in circulation, or even by credibly threatening to do so, the US government can also reduce the value of a Dollar in terms of goods and services, which is equivalent to raising the prices in Dollars of those goods and services.

"We conclude that, under a paper-money system, a determined government can always generate higher spending and hence positive inflation."

Neither Friedman nor Keynes got to put their reflationary plans into action, of course. To date, Japan has failed with its make-work programs and free money gifts, too. But Bernanke sat at Alan Greenspan's right hand while the Fed Funds rate was slashed from 6.0% to 1.75% in 2001 – and then cut again to an "emergency" rate of 1.0% by June 2003.

The Nasdaq turned higher...home prices soared...and despite seventeen hikes in the official cost of Dollars since then, there's also been a surge in that "quantitative easing" known as trading on margin. According to the latest NYSE data, margin debt – "a broad measure of leverage" as the Wall Street Journal puts it – jumped 11% to $353 billion in May, up from below $318 billion in April. And this is BEFORE the US slips into recession, and lenders stop lending for fear of bad debts.

Just how much speculation will the Great American public indulge in when rates slide again and we're all urged to hold hands and gear up in the markets? Difference is, the Japanese Yen began its slide from near all-time record highs. The Dollar, in contrast, has already sunk to a near-three decade low on its Trade-Weighted Index. 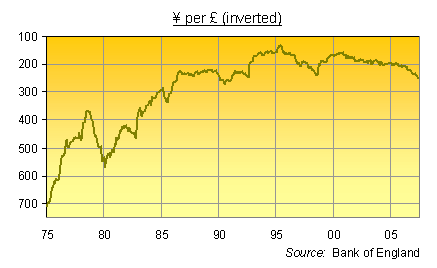 "The arrival of Japanese households as major investors seems to have affected foreign-exchange markets," said Bank of Tokyo board-member Kiyohiko Nishimura during a speech in Washington earlier this month. "The gnomes of Zurich were accused in their day of destabilizing markets. The housewives of Tokyo are apparently acting to stabilize them."

Nishimura-san might just be right – if by stabilize he means "destroy the Yen's purchasing power." Which he does. Deflation in the classical sense defines a shrinking supply of money; on the ground it means falling asset prices, lower wages, and the loss of all pricing power for business and industry.

Make the currency worth less, therefore, and deflation is cured. Make it utterly worthless, however, and the trouble will have only just started. 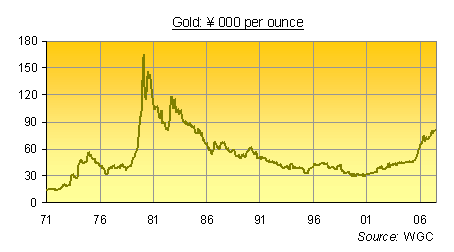 Priced against gold, there could be a whole heap of ruin left in the Japanese Yen. Indeed, the greatest achievement of Japan's near-zero interest rates so far has been a bull market in gold for retail investors sick of earning next-to-nothing on their cash.

In the economy, however, total cash earnings for Japanese workers have barely risen over the last 13 years. In May salaries slipped 0.1% from 12 months before. The Cabinet Office said this week that Japanese consumer confidence fell in June, the third monthly decline on the run, giving the lowest score since Dec. '04.

This is what a real credit crunch looks like, a gut-hollowing time after asset prices collapse and near-zero interest rates can't cancel repeats of When Bad Debts Attack on TV.

How to encourage fresh lending, fresh spending and growth? You can make money free, but you can't force banks to lend it. "Bank loans for start-ups still require personal guarantors," notes Ken Worsley for JapanEconomyNews.com. "In other words, a person needs to sign off and be liable as an individual.

"Great risk management for the banks, bad for start-ups and innovation. On September 29, 2006, the Prime Minister told the Diet that he would urge banks to do away with this in order to encourage entrepreneurship, but nothing has actually happened."

Now the world's largest economy is settling down to its own version of When Bad Debts Attack – with US home-owners, investment banks and retirement funds all fighting to take the lead role.

Buy the Yen if you dare. Back the Euro if you must. Bet against all currency values – and Buy Gold – if you think the collapse of the Dollar can only cause trouble.