END_OF_DOCUMENT_TOKEN_TO_BE_REPLACED

INFLATION – everyone's worried about it, says Adrian Ash at BullionVault.

Central bankers worry there isn't enough, drivers worry there's way too much at the pump, and Wall Street's bag carriers worry they only see it in private-school fees, not in their pay packets.

What if inflation really shows up, so plainly that even a central-bank chairman could no longer deny it?

"By the time inflation becomes evident," reckons gold-heavy John Paulson, apparently writing to his hedge fund clients recently, "gold will probably have moved, which implies that now is the time to build a position."

Paulson & Co. have good reason to study (and promote) how Gold Prices might move. Holding 4% of the giant $71 billion SPDR Gold Trust ETF sure concentrates the mind. But the link between gold and inflation is exercising other finance professionals as well. 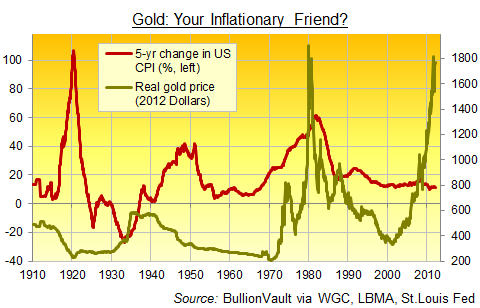 Just like Paulson, Jeremy Grantham of GMO says inflation now looms. "The 800-pound gorilla...is not in the room yet, but you can hear him thumping his chest up in the hills," he writes in his latest client letter.

This gorilla – a rising cost of living – would eat pensioners and bondholders for breakfast, of course, and gnaw on their fixed-income bones for lunch. "He will come eventually, and before he does, you should remember that stocks are underrated inflation hedges," the GMO letter goes on, pointing to scatter charts so dense you'd think Georges Seurat had painted them.

Beyond the pointilism, though, Grantham agrees with Paulson that you'll want to be early with gold. But stocks bought as an inflation hedge ahead of time could cost you at first. 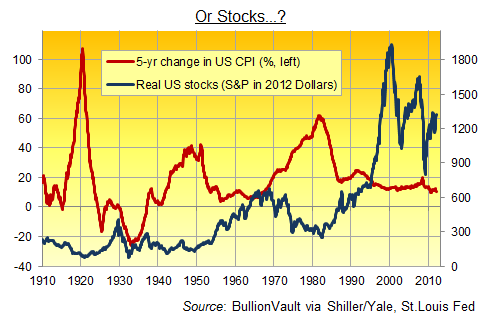 "Worse still, equities perform badly in periods of high inflation, and governments will need quite a lot of inflation if they are really to erode their debt burdens. The only asset class [which authors Marsh, Dimson and Staunton] could find with a positive correlation was gold. But the long-term real return of gold has been just 1% a year, barely better than cash."

One per cent per year won't buy you a dishwasher, let alone put your kids through school. So what to do? Buy stocks, according to our chart above, but only once inflation starts to decelerate (see 1920, 1950 and 1980). Spotting that change of trend in real-time won't be easy, especially if you come to feel the official rate of inflation can't be trusted. But until then, and as inflation in your cost of living accelerates, Buy Gold says Paulson the gold bull, Grantham the equity bull, our chart above, and also the disinterested academics of the London Business School.

Gold rises fastest as inflation jumps, they all say. Which makes sense. Yet judged on the last 10 years – and the Great Depression of the 1930s – gold clearly does more besides, if not something else entirely. 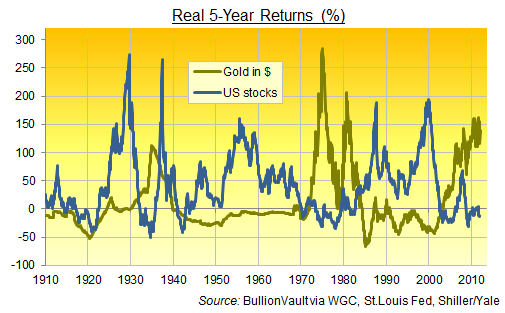 Despite the weakest decade for official US inflation since the 1960s, Gold Prices have risen 6 times over since 2001. So either the inflation data are bad, or strongly rising consumer prices are not a necessary condition for gold to go up.

What matters more than inflation? Based on the CPI, real Gold Prices have risen sharply since over the last decade. Stocks, in contrast, have gone pretty much nowhere, extending a pattern that you can see in our century-long chart above. Because over the last 102 years, and including dividends, the real return on US equities has typically been negative when gold was up, and positive when gold was down.

This patterns holds true even during the fixed-Gold Price era of the Gold Standard. On a 5-year basis, stocks and gold gave investors positive vs. negative real returns in 59% of all months since 1910. They were both up in one-third of those months. Gold and stocks lost real value together less than 7% of the time, most of which came amid world-war inflation.

So owning some of both would seem the sensible, safe course, now weighting one or the other. Such a re-weighting would now be advisable if you think inflation is about to take off. Or so the historical data say.

Buy Gold at the lowest prices and store it in the safest vaults from $4 per month using the world's No.1 provider online, BullionVault...