END_OF_DOCUMENT_TOKEN_TO_BE_REPLACED

Central banks tried to conjure inflation for 20 years...
CENTRAL BANKERS have spent the last 20 years trying to conjure up inflation, writes Adrian Ash at BullionVault.
Now the monster has appeared, no one wants to take the blame for invoking it.
Not even after drawing a chalk circle of zero interest rates and waving their wands of QE money creation for a decade and more.
If any wizards know the spell for pushing this genie back into its bottle, they aren't working in government, central banks or the mainstream media today.
Investors and savers seem bewitched with fear.
"Some 71% of retirement savers tell Fidelity Investments [in a new survey] that they are worried about how inflation will affect their savings and their ability to retire," says MarketWatch.
"Maybe more ominously, about a third...31%...say they don't know how to make sure their savings keep up.
"And among the other alarming news in the survey, 45% of younger savers, meaning those aged 18 to 35, say there's no point saving for retirement until 'things get back to normal'."
'Back to normal' could be a big ask.
Inflation, war and rising interest rates flip the last 20 years of cheap money and run-away asset prices on their head.
That's because they threaten to snap the long bull market in government bonds...
...the ultimate source of all financial flows and costs...
...where rising bond prices have both enabled and encouraged central bankers to keep cutting interest rates by pushing the rate of annual return demanded by investors for lending their money to Washington, Tokyo, Frankfurt, London and all the rest ever downwards.
What worked for 2 decades will die hard, even in crisis.
And so with Russia's assault on Ukraine making wall-to-wall headlines, "[People] are seeking refuge in long-term Treasuries," reports Bloomberg, "pouring $2 billion into the ETF $TLT last week, the second-highest weekly tally since the fund's 2002 inception."
Rushing into the warm embrace of Uncle Sam's debt might make sense if you fear a global economic slowdown, or even a widening global conflict, as a result of the horror being rained down on Ukraine by Putin's Kremlin.
But this huge inflow to fixed-income bonds comes, as Bloomberg adds, "despite talks of a higher terminal Fed interest rate for this cycle and higher inflation for longer."
Bond prices tend to go down when interest rates rise. Inflation running at 4-decade highs is meantime eating into the rate of return offered by those bonds at a pace never seen before.
Like, never in modern times. Not even during the 1970s.
Here's the annual yield offered by 10-year US government bonds minus the rate of Consumer Price inflation. 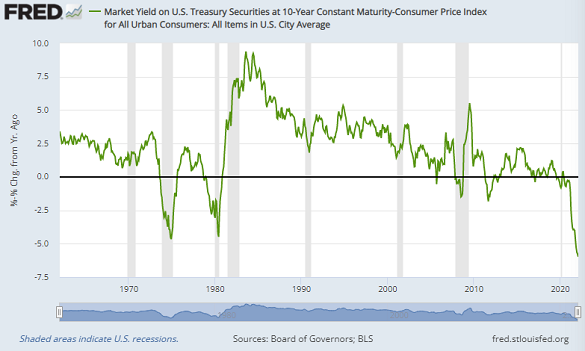 And here's the latest "real rate" offered on short-term bank deposits...
...courtesy of the US Federal Reserve and the Bank of England.
Again, US savers have never had it so bad after you account for inflation.
But UK savers had to go through the Sterling Crisis and IMF bail-out of 1976 to suffer a worse loss of purchasing power than they are enduring today. 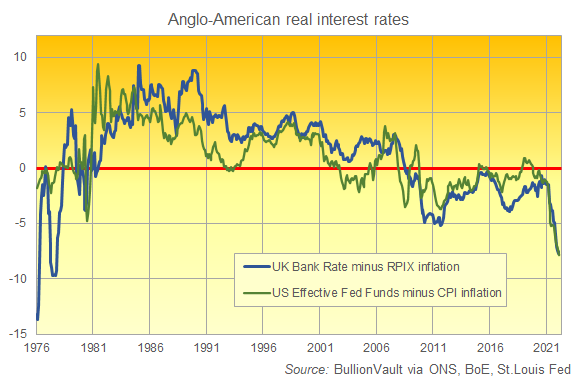 That 1976 crisis for the UK might offer a glimmer of insight into where the world of money is heading today.
The crisis really kicked off when, faced with massive public debts...a sinking currency...and double-digit inflation, the ruling Labour Party was defeated by members of its own side in trying to turn things around.
Harold Wilson's Public Expenditure White Paper said the time had come to start raising tax and cutting government spending.
A kind of Thatcherism 3 years before its time, but with 1930s-style tax hike 'austerity' on top and without the nuclear attack on inflation from record-high interest rates imposed by the UK and other Western central banks at the start of the 1980s.
Even in 1976 however, things still hadn't got bad enough for the UK Parliament...never mind the country...to get behind tightening the national or household purse strings like that.
Because the only thing worse than an inflation-fuelled recession was a recession caused by high interest rates. Or so the politics of the day dictated.
So the hapless Labour Government's demand for "massive and immediate cuts in public expenditure" was rejected, because it "would increase both unemployment and the cost of living". Or so everyone pretty much agreed.
Fast forward a near-half century.
"There are times everyone needs help and this is one of them."
So says a young town councillor in the low-income town of Harlow, Essex.
He's a right-wing Conservative politician, not left-of-centre Labour. But you wouldn't know it from the company he keeps with his fiscal thinking.
"The typical family could see disposable income fall by 4%...[some] £1,000 in real terms...in the 12 months to April 2023," says the Financial Times, quoting analysis from the left-leaning Resolution Foundation think tank.
"The poorest will be hardest hit because they spend a bigger proportion of income on food and energy, where prices are likely to rise most."
Never mind that Resolution were warning about this long before Russia's invasion of Ukraine sent energy prices shooting higher again from last winter's multi-year and new record highs. Never mind that Moscow's timing says Putin is using inflation as a tool of war...
...squeezing Russia's oil and gas guzzling European customers between the rock of keeping the lights on and the hard place of directly helping to finance the Kremlin's slaughter of Ukrainian civilians.
No, something must be done about the cost of living crisis. And that something, even with interest rates merely edging higher at the worst gap below inflation for 4 decades and more, is to throw government money at the problem.
"Brits face a cost-of-living crunch as fuel prices rise and sky-high inflation bites," screams the very Conservative Daily Mail.
So after freezing rather than raising fuel duty last autumn in the face of surging petrol prices, UK finance minister Rishi Sunak is now "poised to cut fuel duty in this week's Spring Statement" the Mail can reveal ahead of Wednesday's actual UK Budget announcement.
Sunak will also freeze VAT sales tax for pubs and restaurants while "helping tens of thousands of Britain's poorest avoid national insurance blow" from the long-planned rise in that tax rate.
Happy yet?
No, on the contrary, Sunak's fellow Tories "are still warning the Chancellor that this measure will not be enough," says the Mail.
So instead of facing down the rising cost of living by cutting spending and maybe denting household spending by raising taxes as planned, the UK will do the opposite.
Because who in their right mind tries to tackle inflation by reducing government deficits and reducing household consumption?
The same challenge...of being unable and unwilling to fight inflation precisely when it needs fighting...also faces central bankers, of course.
And here again, so-called conservative types are leading the hand-wringing.
"The textbook cure for inflation," says the director of right-wing think-tank the CPS, "is to wring it out of the economy (note the pain implied in that verb) with higher interest rates.
"But our prosperity floats on a sea of cheap money. Raising interest rates will be extraordinarily tough, especially for anyone in debt, such as mortgage-holders and governments."
Central bankers themselves have gone awfully quiet about this, even those who are now, finally, raising interest rates from zero while their domestic inflation rate runs at 6%...7%...and above.
"What Powell didn't say about [the Fed's new, lower] GDP forecast is that the Fed kind of has to slow income growth if it wants to slow inflation," notes one finance journalist of last week's US central bank rate-rise from zero to 0.25%.
Here in the UK, the Bank of England has now raised from zero to...wow!...0.75%. And it forecasts that this gentle rate-hiking plan for getting inflation down will put 1/3rd of a million people out of work.
Only, it doesn't actually say that bit out loud of course. Instead, it buries it in econo-jargon by way of forecasting how the economy would grow if it didn't raise rates any further.

Bottom line?
Tighter spending and higher interest rates in the UK or US or Eurozone would not stop Putin. Nor would it boost oil output from Saudi Arabia or re-direct LNG tankers from Asia to Europe or North America.
Such policies would, however, hurt US and European energy demand...
...helping let some of the air out of inflated energy prices through lower consumption caused by lower disposable incomes and, ultimately, higher unemployment.
That, of course, would be terrible. Too terrible by far today.
Give it 3 years maybe, judging by the UK's 1976 experience.
Or maybe give it a decade judging by US President Nixon's early 1970s' attempts to 'whip inflation now!' with lower interest rates and ever higher government spending.
Either way, investors and savers had better hope (and not just for the sake of humanity) for a swift peace between Ukraine and Russia which helps energy costs come crashing down, pushing the evil genie of inflation back into its bottle without any policymakers needing to act.
Because it is politically impossible for government or central banks to try exorcising the monster today. And even with energy prices falling, it may be too late to stop the daemon causing havoc.
Germany's producer-price inflation, for instance, last month hit an all-time record of very nearly 26% per year in February.
Excluding energy costs, factory-gate inflation hit 12.4% per year.