END_OF_DOCUMENT_TOKEN_TO_BE_REPLACED

Fed never ignored yield inversion before...
DO YOU remember Team Transitory? asks Adrian Ash at BullionVault.
That was name given by finance journalists to the gaggle of central bankers and politicians who...throughout 2021...said the sudden jump of inflation would not last.
The logic ran that, because commodity prices had crashed in early 2020 amid the Covid Catastrophe, the year-on-year rebound gave a confusing picture.
It would vanish from the data soon enough, once all the little post-Covid supply-chain glitches were fixed.
That's why Federal Reserve boss Jerome Powell used the word "transitory" again and again last summer...
...sometimes swapping it for "temporary" just to show how deeply he had thought about it.
Janet Yellen at the US Treasury used those words too. She was also 100% wrong. And so like Powell did in December, she finally left Team Transitory for Team Reality last month...
...beaten into quitting by inflation hitting new 4-decade highs month after month after month.
The rest of the world's policymakers have switched sides as well.
Anyone glancing through the latest Central Bank Watch in BullionVault's Weekly Update emails will know New Zealand, Canada and South Korea all hiked interest rates hard yet again in July.
The Bank of England has broken the habit of a decade and actually started doing something too, albeit the same thing month after month. Even the Swiss raised in June. Heavens, the Eurozone even moved upwards on Thursday this week, albeit to zero as inflation rises above 8.5%.
That might give us pause. Because the ECB always gets it wrong when it matters. And just as policymakers adjust to the first half of 2022's reality, the second half has begun...
...and it looks like Team Transitory is enjoying a revival.
It just signed the bond market as captain. Again. 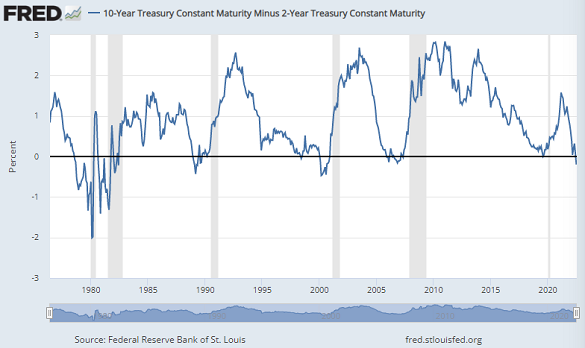 "The yield curve plots the return on all Treasury securities," explains Reuters.
"It typically slopes upward as the payout increases with the duration...[and] a steepening curve typically signals expectations for stronger economic activity, higher inflation, and higher interest rates."
A steepening curve isn't what the USA is seeing today however.
On the contrary, the yield curve is now "inverted" between 10-year and 2-year bond yields. The shorter-dated debt offers a bigger rate of return than the longer-term debt. Which means that investors and traders in US Treasury debt...pretty much the biggest and most active market in the world on a daily trading basis...think the Federal Reserve will be cutting interest rates again sometime between 2 and 10 years from now. Sometime between 2024 and 2027 in fact.
We looked at this back in April, when this 10-2 yield curve thing made headlines around the world.
That's because such an event – according to everyone – has ALWAYS preceded a US recession. Those economic downturns are marked by the vertical grey bars on the chart above.
But as we also noted this spring, the 10-2 spread has forecast more recessions than the US actually went on to suffer. So for confirmation, we should also watch the spread between 10-year and 3-month yields. Because that gap really does count for predicting a US recession with a 100% strike rate in the modern age.
Back in April, the 10y-3m spread wasn't inverted. It was pointing sharply higher.
But here in high summer? While the 10y-3m spread remains positive, it's plunging towards zero faster than Argos is selling out of aircon units here in heatwave Britain today. 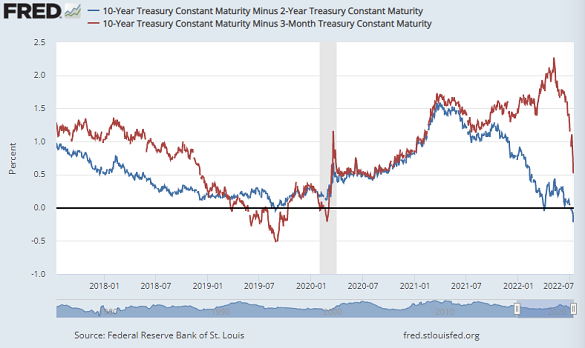 As for inflation itself, the bond market now says that the soaring cost of living is set to fly more slowly on its "breakeven" forecasts for the next 5 as well as the next 10 years ahead.
Most telling, the bond market is also pricing both lower inflation and lower interest rates on the well-regarded "5 over 5" measure. It tracks crude oil prices pretty tightly...
...and the price of fuel has struggled since peaking in March...
...even if it hasn't, as yet, collapsed like Dr.Copper...the base metal with a degree in economics, because it points the way ahead so very reliably.
What to make of it all?
Speculators in the interest rate market think the Fed will keep hiking. But they are less sure about a massive hike of 1 percentage point at this coming week's meeting than they were only a week ago, cutting the odds from nearly 1-in-3 below 1-in-5.
Speculators also continue to see money getting tighter in their betting on gold and silver too, turning bearish on the classic (if not-so-reliable) inflation hedges for the first time since spring 2019.
Thing is, the yield curve is now more inverted between 10- and 2-year yields than anytime since the 2000 tech stock crash, and the 10-year-3-month spread is plunging towards zero if not lower as well.
This could matter to the US Fed. A lot. Because every time over the last 6 decades that the 10y-3m spread has gone negative, the Fed has stopped raising rates and most often started to cut them.
That happened even when the 10y-3m curve predicted a recession which didn't show up, something not seen since 1966. 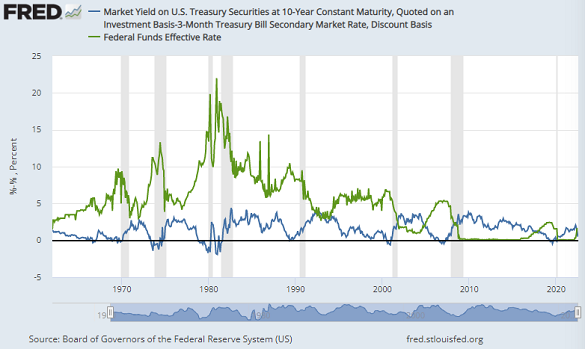 "I'm a little skeptical that we'll get to a recession," said James Bullard, president of the St.Louis Fed and a voting member in 2022, last week.
Sure, the economy's growth is slowing. Sure, inflation is destroying demand. And sure, industry is hurting from the worst year-on-year price increases pretty much forever in many resources and goods.
But with inflation staying "stubbornly high," Bullard thinks, "I would now say that we may have to try to hit 3.75 to 4% by the end of 2022."
Gold and silver tend to do badly when central banks hike interest rates higher more quickly than inflation rises. And those precious metals are struggling right now.
But the contest in late-2022 would seem to come between the bond market...now heading up Team Transitory...and central bankers who waited between 9 months and a year to admit that "transitory" was a bad call back in spring 2021.
To repeat: The Fed has ALWAYS paused raising or begun to cut rates when the 10y-3m yield curve inverts.
It isn't inverted just yet.