END_OF_DOCUMENT_TOKEN_TO_BE_REPLACED

Google Trends: Germany buys gold when CPI fears rise...
PEOPLE buy gold when they fear inflation ahead, writes Adrian Ash at BullionVault.
That old saw has been around for as long as people have faced a choice between holding their savings in official currency or holding a chunk in the yellow metal itself.
Yet here we are in spring 2021...
...with the price of key commodities quite literally off the chart when you look at their year-on-year rebound from last spring's Covid Crash...
...and Google searches for the word "inflation" jumping to new series records...
...but gold has sunk despite a flood of inflationary forecasts and warnings. 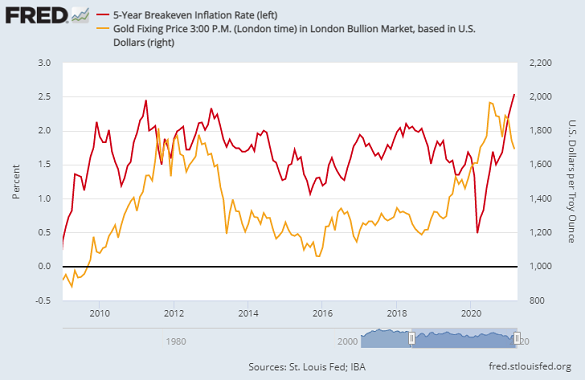 "Inflation pressures are rebounding" as the economy re-opens, says Ray Dalio of the $150 billion Bridgewater Associates. Former Pimco boss Bill Gross predicts 3-4% US inflation by mid-year.
Never mind that inflation on official CPI measures has failed to budge so far. Market-based forecasts have jumped, with 10-year US breakevens rising a whole percentage point from October to reach 2.3% today, the highest such annual inflation forecast since 2013. Five-year rates as suggested by the same gap between inflation-protected and nominal Treasury-bond yields have reached almost 2.6%, the highest since summer 2008.
But gold?
It just sank to 9-month lows in Dollar terms and erased almost all of 2020's gains for Euro, UK and most other investors.
Blame the surge in government bond yields if you like ( I would). That's clearly driven in part by that same inflation scare but also by FOMO in sexier assets ( junk bonds anyone? NFTs that aren't even flatulence?) plus a rumbling of Mr.Creosote for investors already stuffed to bursting with government debt but now presented with Joe Biden's $1.9 trillion bill for Covid relief and perhaps another $2 trillion (or $4 trillion, rumor can't decide) for his green infrastructure bonanza.
As a result of those rising bond yields, also blame the slow but steady trickle out of fund management money away the big gold-backed ETFs (everyone else does).
Last year's Covid Crash darlings among professional investors, gold ETFs swelled at a record pace in 2020, the must-have pandemic asset alongside the warm, loving embrace of all that government debt offering to pay nothing or less.
But here in 2021, gold ETFs have now shrunk by 5% so far, yet gold prices have lost twice as much. So maybe something else is happening. Maybe a lack of interest in gold among the wider public is also hurting.
Data from Google Trends say that searches to "buy gold" in the USA have almost halved in number from last summer's peak, back when gold prices surged to set a new all-time peak.
This comes as searches for "inflation" have reached a new all-time high, top-ticking the commodity supercycle peaks of 2004-2008.
What gives? 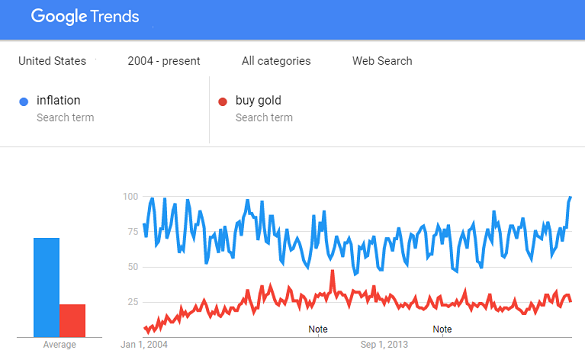 Google Trends says there is in fact no relationship between the number of searches for "inflation" and searches for "buy gold" anyway among US residents.
Half the time they rise or fall together, and half the time they don't.
Net-net across the last 15 years, that gives a correlation of just 0.01 on average. Almost precisely zero, in short.
Across the Atlantic, however – and up through Iberia, then on to the other side of France – popular concern over inflation shows a much stronger relationship with interest to buy gold.
Or rather, with "gold kaufen"... 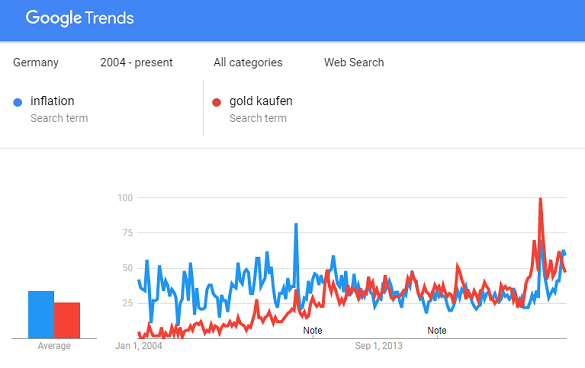 Germany's household gold demand has long been a phenomenon, something we analyzed for the mining industry's World Gold Council back in 2017.
The conclusions from that research still hold true regarding the demographics, readiness, commitment and trading activity of BullionVault's customers in Germany compared to other users of the No.1 precious-metals platform for private investors.
More broadly, and based on data for jewelry and other retail product demand from the WGC's end-2020 report, Germany was in 2020 one of only 5 nations to see gold demand greater than 2 grams per person...
...and the only 1 of those 5 to see demand-per-person rise from 2019, up 72% as its Asian and Middle-East peers saw gold demand drop amid the pandemic's economic slump.
What's most remarkable – and again, still true since our 2017 analysis – is that while Germany is the world's 4th heaviest household buyer overall, virtually all of that demand comes for bar and coin instead of jewelry.
Fully 95% of Germany's household gold demand came for retail investment products in 2020. That contrasts with just 37% for coin and bar instead of jewelry across the other top 5 of China, India, USA and Turkey.
The key driver? Again, as per our 2017 analysis, it's wrong to try and discern a single cause for collective action caused by thousands of individual decisions. But the data do suggest that concerns over inflation map more clearly against interest in buying gold in Germany than they do in other major Western economies, albeit across longer time-frames.
Looking at search volumes across the last 15 years, Google Trends shows a similarly weak month-to-month co-movement for "inflation" and "gold kaufen" in Germany as it does for "inflation" and "buy gold" in the USA, giving a median average of 52.8% and 50.0% of the time respectively.
But while the USA continues to show no connection across 3-month and 12-month periods at 46.7% and 49.4%, the co-movement of search volumes in Germany rises to 60.5% on a 3-month view and 62.7% across 12-month horizons.
No, that clearly means inflation is not the single driver of interest to buy gold in Germany. But as with the USA, the data from Google Trends show no such relationship for the UK, France or other G7 economies.
Maybe cultural memory dies hard even 100 years after hyperinflation. Or maybe German households know something that other consumers have yet to grasp. Or maybe they worry too much.
Inflation has in fact slowed despite a decade and more of QE money creation, plus zero-to-negative interest rates, around the world. Government bond prices have in contrast continued to go up – this year's pullback aside – despite record quantities of debt being issued and spent. So the underlying concern should, perhaps, still be deflation rather than its more well-known twin.
In which case watch out. Because hyperinflation is not inflation x10. And there is nothing like deflation to bring it on, as the Weimar wipe-out starting in 1921 shows.