END_OF_DOCUMENT_TOKEN_TO_BE_REPLACED

Currency controls like India's block on gold imports is a symptom, not a cure...
WHAT'S GOING on in India over gold imports is nothing new, writes Miguel Perez-Santalla at BullionVault.
We've seen it over and over again throughout struggling economies. Blocking inflows of gold, to try and stop outflows of capital, is called currency control. These attempts to control movement of currency are very common when a government is faced with problems like India's. They actually create a more crippling environment than the one they are put in place to improve. And make no mistake, controls on the movement of gold is a control on the movement of currency.
Gold has always been and will always be the safe haven of choice when people lack confidence in their government. Lacking confidence doesn't only mean that they're not certain they'll perform well, but it also may mean that they don't trust their government to operate in their best interest. Starting with allowing economic freedom, and defending the value of the currency.
What are these currency controls recently put on gold in India?
Oddly enough, the Reserve Bank of India and the government are so concerned with the balance of payments that they miss the most important responsibility they have. It is not to control the outflow of capital, but increasing the inflow of capital. Free trade, when enabled both ways, will find an equilibrium that will benefit all parties.
India's finance minister Palaniappan Chidambaram is attempting to do just that, but in the interim the laws that they put in place are hurting one of their key industries, the Indian gold jewelry trade. Estimates vary, but one puts the jobs at risk of being lost if the controls stay in place at half-a-million. This will force the people in that industry to search out other solutions.
Trying to interpret the government's regulatory actions has caused foreign investment in India to plunge over the past year, while capital expenditure at home may fall further in the future. Because as usual, when a country attempts to control business, then business goes elsewhere.
The chairman of Cipla (a large pharmaceutical company), Yusuf Hamied, in a recent interview with the Indian business newspaper The Business Standard, said that thanks to India's unpredictable tax regime, "All big Indian companies are going abroad. The time has now come for us to say goodbye to India."
Why not blame gold? From 2011 to 2012 India's gold imports increased nearly 50% to an estimated $57.5 billion. Of course, this does hurt their account deficit and it is something they should be concerned with. But their attempts to close the gap by controlling gold flows are again the wrong tack to take.
What happens when governments impose restrictions is that they also increase crime. With a 10% duty on gold, the profit to smuggle gold bullion into India has increased. Though some of the smuggling will be caught, much will make it into the country representing a loss of revenue to the government. Ten percent is just too high of a spread to be borne by the Indian public and market for which the gold is intended.
A recent article by Bloomberg details how gold-smuggling gangs from the Middle East are now entering this business. Some Indian jewelers are willing to buy from anyone that can bring them lower cost gold, because it enables them to keep their business running. Otherwise they can only live off the scrap metal they receive from the marketplace.
Banks and traders halted imports of gold bullion during August, after the central bank linked inbound shipments to re-exports. So gold supplies have become difficult to come by. But the recent collapse of the Rupee by 18% has increased the amount of gold being turned in for cash by Indian households, who are also faced with a "credit crunch" caused by the rising financial crisis. And so once again, gold – which their government informs them is not a proper investment – has saved the individual by providing liquid funds just when they're needed.
How does this affect the external gold market? The answer so far is very little. The market in China is constantly growing and China's gold demand may overtake India as the largest consumer in the near future. Physical demand for gold coins has been strong globally. But India's traditionally strong period of festival and wedding demand now running to Diwali in November will likely see much lower gold imports through official channels.
Of course, gold will still flow where it is needed. The controls that the Indian government has established have done little to stay the hands of investors.
It's almost too simple to believe that the government cannot recognize where their focus should be. India's gross domestic product growth rate has been on decline since 2011 from a high of 9.3% to currently 4.4%. Capital outflows, distrust of government regulations, and the inability to get businesses active in India are the primary causes of this government's troubles. If the business environment were to be improved then the economy would grow as well. The people themselves would reinvest into their country. 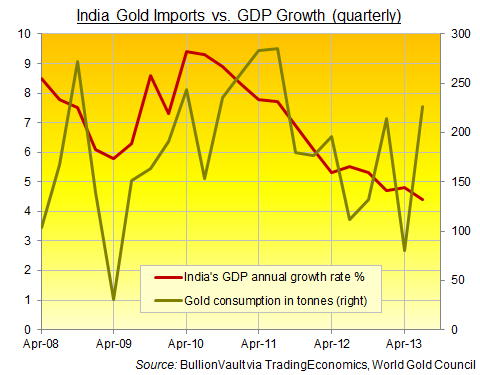 In the current environment, in which industry is stifled and unable to grow within India, then we can expect to see, sadly, a decline in confidence and GDP. Continuing down this path will inevitably lead to another economic disaster such as Argentina is suffering, along with many other countries with closed markets.
In a country like India, where they must import their energy alongside their gold, it may appear difficult to keep their balance of payments in the black. Yet their human capital is strong enough at this juncture to supersede this difficulty, if only the business environment were improved so that companies such as Cipla would not move out and instead expand their operations. Foreign investment also looks unlikely to reverse without a change of policy, as Goldman Sachs downgraded India to underweight and recommended investors stay selective in that market.
It is better to have a reasonable import tax, and let business work, so the government can earn income from it rather than attempting to stop the flow of gold via exorbitant duties and currency controls. Blocking the free inflow of gold is a bad symptom of India's economic problems. It can't be a cure.