END_OF_DOCUMENT_TOKEN_TO_BE_REPLACED

The SHIPPING industry is vital to the global economy, with about 90 percent of all globally traded goods transported by sea, says the World Platinum Investment Council's latest 60 Seconds in Platnum.
Yet, with some 100,000 commercial vessels in deployment, it accounts for around three per cent of global greenhouse gas emissions.
The International Maritime Organization (IMO), a United Nations agency responsible for regulating shipping, aims to cut greenhouse gases from ships by at least 50 percent from 2008 levels by 2050.
Decarbonising the maritime industry requires collaboration and investment in developing new fuel types and propulsion technologies. Hydrogen is poised to play an important role in the energy transition of the maritime sector and establishing safe technologies that the industry has confidence in is a vital part of achieving this. 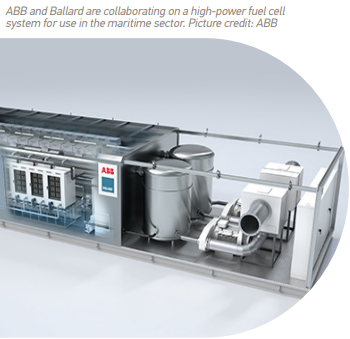 ABB, a leading global technology company, and Ballard, a major developer of platinum-based proton exchange membrane (PEM) fuel cell systems, are partnering on a project to make zero-emission hydrogen fuel cell technology commercially available for larger ships.
The ambition is to produce a high-power hydrogen fuel cell unit capable of generating 3 megawatts (MW) of electrical power. Having a larger, megawatt-scale power unit makes it feasible to combine units to reach much higher total power than is practically possible with smaller power units.
The high-power fuel cell unit is a flexible solution that will support the energy needs of a diverse range of vessels requiring multiple 3 MW blocks of power. A cruise vessel operating in coastal areas could either run entirely on fuel cell power or switch to it when operating in environmentally sensitive areas or emission control zones, while a ferry with a regular schedule and frequent bunkering opportunities could operate solely on fuel cell power. For ocean going vessels, fuel cell power could support auxiliary needs. The concept of the solution also envisions the integration with an energy storage system.
The ABB and Ballard collaboration recently achieved an important milestone when it received an approval in principle (AIP) from leading classification society DNV for its high-power hydrogen fuel cell unit. DNV delivers testing, certification and technical advisory services and its AIP provides early phase verification of the new design concept, an important step in building trust in this new technology. With the AIP in place, the jointly developed solution can move to its next phase ahead of becoming commercially available in the next couple of years.
Sweden's PowerCell, which also produces fuel cell modules, has also been working to bring mega-watt PEM fuel cell systems to the maritime market, with a focus on space, safety and classification issues. It, too, has been working closely with classification organisations, developing a safety case in accordance with IMO legislation.