END_OF_DOCUMENT_TOKEN_TO_BE_REPLACED

Flocking together just feels so safe – even through the doors of the abattoir...

BUYING LOW and selling highs sounds easy enough. But the pay-off from this strategy eludes almost everyone.

Drowning in newsprint and punditry, people prefer to buy what's hot instead – can't-lose investments like Tech Stocks in late 1999, oil futures in summer 2005, subprime mortgage bonds in 2006...and tulip bulbs in Amsterdam, 1624.

Average behavior can never beat the average, of course, and it takes extraordinary actions to deliver extraordinary profits. But still the crowd flocks together, buying what's hot and selling what's not.

Herding together feels so much safer – even through the very doors of the abattoir! 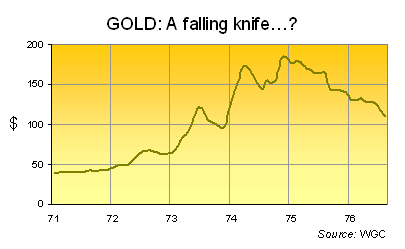 "Gold rose 600% in the 1970s and then went down nearly every month for two years," remarked Jim Rogers in an interview with Financial News earlier this week.

Fast forward three decades to early summer 2007, and the market's giving up on gold yet again. Shareholders in StreetTracks GLD have shed 6% of the trust's gold from this time last month – the first drawdown since it launched in 2005. Gold futures traders cut their net long positions by 16% last week alone.

"That’s what happens in bull markets," shrugs Rogers. Author of the best-selling Adventure Capitalist, he co-founded the Quantum Fund with George Soros at the start of the '70s. It gained 4,200% during the next decade.

For the short-term, however, Jim Rogers foresees a "sizable near-term correction" in gold, as the New York Sun explains. Speculators built up a huge leveraged position, far outweighing the shorts held by commercial gold traders and refineries.

Why this massive overhang? Short-term hot money craves volatility, and that's just what it gets in gold. The metal has become twice as volatile as US stocks over the last year, says the GFMS consultancy. And taking gold's temperature, the overhang of speculative longs built up in April recorded a fever.

Gold now needs the hot money to get squeezed out – and it's being wrung dry in the futures market right now. "The Dollar gold price would seem to have decisively broken down," said John Dizard in the Financial Times early this week, "with a trend that appears sustainable for the next several months, probably at least to the end of this year."

"Within a year, the gold bear market will have run its course," he goes on. "Mr Bernanke's expertise in depression avoidance will be called on. He and his counterparts in Europe, Japan and China will be called on to keep the global Ponzi scheme going, because the real economies cannot stand a bust in the financial economies."

This Ponzi scheme played us all for a sucker – long-term gold bulls included! Just one more Reflation Trade for hedge funds to buy, the metal got confused for a tradable asset to be swapped for ever-more leverage geared up on ever-more cheap credit.

But Ben Bernanke and his friends at the Fed won't cut US interest rates to defend gold, of course; nor is that what Dizard is saying. They'll cut interest rates to defend real estate and securities prices instead, fearing a real economic depression caused by collapsing asset valuations. And luckily for anyone yet to buy gold, US housing just feigned a recovery.

This news has helped boost the Dollar and push gold lower. "Home buyers took advantage of the biggest decline in median [home] prices since 1970," reports Bloomberg.

"Baaa! Baaa!" bleat the new homebuyers, wagging their tails behind them.

"People are coming to grips with the idea that not only are there not going to be Fed rate cuts any time soon, but if the 10-year Treasury yield goes much higher, then people are going to start talking about the Fed lifting rates again," said Jim Paulsen, chief investment officer at Wells Capital Management in Minneapolis, this week. He was speaking after data showed the number of new US home sales leaping at its fastest pace in 14 years last month. All told, the number of people buying new US homes rose 16% in April from March.

But what the Dollar bounce missed on Thursday – and what the housing lambs love – is that average sale prices for new homes in April fell by 11% from March. That's the fastest rate of collapse on record.

In other words, the only way US builders can shift unsold homes now is to discount – and discount massively. Existing homes, by comparison, just won't sell – because the discounting has yet to begin.

The median price of an existing home, said the National Association of Realtors on Friday, was cut by less than 1% in April from March. So the volume of sales fell sharply instead, down 2.6% from a month earlier. Coming on the back of March's 8% drop in turnover, the slowdown outstripped Wall Street forecasts by a factor of nearly nine.

Looking ahead, we'll see "a significant increase in defaults and foreclosures," warned David Wyss, chief economist at Standard & Poors, during the Mortgage Bankers Association's expo in New York this week. Both S&P and Moodys – the world's leading credit rating agencies – now predict a drop in US house prices of 8% for 2007 and 2008 as a whole. But last month's 11% drop in new-home prices says that could prove an under-estimate. The grinding shutdown in existing-home turnover says prices have to fall much further and faster.

How long before the Fed steps in with a little "depression avoidance"? Timing the Fed's reaction won't be easy. Mocked for his printing-press speech and Depression obsession, Bernanke's more likely to wait than jump early.

But the bull market in gold – driven by low to negative real rates of interest on the Dollar – may shoot higher on expectations alone. "In anticipation of that rapid reversal in policy," says John Dizard, "gold will take off as it hasn't for a generation." 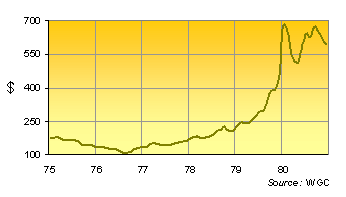 Last time around, as Jim Rogers points out, picking the bottom would have returned six times your money by the subsequent top.

Even buying the top of the setback would have given you 270% gains over the following five years – beating inflation, stocks, bonds and cash as real US interest rates sank back below zero.