END_OF_DOCUMENT_TOKEN_TO_BE_REPLACED

Just because you hoard money or Gold Bullion, doesn't mean you're sick or wrong...

COMPULSIVE HOARDING is an affliction, an illness, writes Adrian Ash at BullionVault.

It disables the sufferer and those around them, presenting a health hazard as stuff piles up and the home turns into a trash can.

"Hoarding and anxiety go hand-in-hand," says one struggling survivor. "For many people, including hoarders and non-hoarders, fear keeps us from letting go of objects we don't need." Beating fear is a tough ask, however, and "clean-up usually provokes intense anxiety," says another report.

"Anyone helping the hoarder – even a professional cleanup crew – should be gentle, always caring and encourage the person to deep breathe and relax."

Now, given these sensitivities – and seeing how the causes of hoarding include dementia, depression, and obsessive compulsive personality – you might expect people to be a bit nicer when trying to get hoarders to stop. But no.

"Companies' growing cash piles are irking shareholders and stunting growth," barked the Financial Times in late January. "Politicians and policymakers are going to have to ask the question," declared David Bowers of Absolute Strategy Research in London – "How much longer are we going to allow companies to run themselves for cash?"

Two weeks later, Martin Wolf was at it in the same pages. "Britain needs to whittle down corporate cash piles," he announced, also quoting approvingly a London finance type, this time Andrew Smithers of Smithers & Co. "If the fiscal deficit is to disappear...there needs to be a mixture of lower profits, higher investment, and significantly smaller current account deficits.

"Increases in government investment and private housebuilding would also help," said Wolf, parroting UK and US economic policy since the Second World War. But the slaughter of corporate hoarders is new. Because the phenomenon is new, and "highly indebted UK households should not run large deficits again." Or to quote The Times this Monday, "Consumers cannot lead recovery. Britain needs business to stop 'stashing the cash'."

Now "Companies must stop hoarding cash and start investing instead," says – choke! – Will Hutton in The Guardian, quoting this week's same press release from the same think-tank, Ernst & Young's ITEM Club. "David Cameron and George Osborne have still not developed a full-throated industrial policy that would encourage companies to spend money on investment and innovation."

"Business investment has picked up nicely in the US," says ITEM's chief economic advisor, Peter Spencer, apparently missing the $1.24 trillion in US corporate cash piles stacked up by end-2011 – well over half of it outside Uncle Sam's borders according to Moody's, as emerging-market growth plus onerous US tax treatment drives businesses to avoid remitting profits back home.

"But UK companies remain extremely risk-averse, which is sapping strength from the economy. Until these companies...start increasing levels of investment and dividends, the economy will remain on the critical list."

Perhaps if everyone shouts loudly enough, the hoarders will snap out of it? But then, they are trying already, albeit at gun point. US equities have been paying a higher yield than Treasury bonds for the first time in six decades. "Total dividends paid by UK companies hit a record £67.8 billion in 2011 [$110bn] a rise of almost 20% on 2010," says Hargreaves Lansdowne, the retail-investor brokerage. "Encouragingly, dividend growth was seen across all industry sectors."

And it's not like corporate US and Britain didn't do their bit in fighting the war of debt vs. recession starting in the mid-1990s either. Over the 12 years ending spring 2009, for instance, private-sector UK companies outside the financial sector spent 124 months growing their bank debt net-net. Yes, UK households  fought harder (141 out of 144 months), but they began to rein in their borrowing sooner and actually saved money right when the canon fodder were called on for a last "big push" in late 2007. 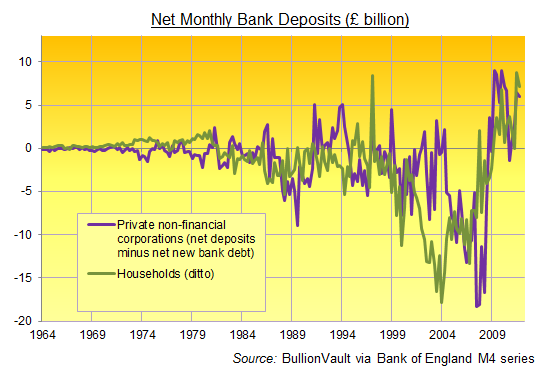 But so what? "British companies are running a cash surplus of some 6% of GDP, the largest in the world," says Hutton, gasping at people making a profit and daring to keep it.

"[They] are refusing to spend that cash on investment or innovation, preferring to hoard it, preserve profit margins or buy back their own shares."

Oh the monsters! Refusing to spend...stashing the cash...hoarding what should be shared for the good of us all! It must not be allowed. And luckily the financial press began softening up public opinion at the start of the year, when the FT first ran that story about what it called "the $1,700bn problem. Companies in the US are flush with cash and are paying out a smaller proportion of their earnings as dividends than ever before. Much the same can be said for western Europe. Governments and households on both sides of the Atlantic are meanwhile strapped for cash. This cannot persist much longer."

"Businesses run 'for cash', rather than spending in an attempt to boost revenues, do not promote growth," said the Pink 'Un.  The government should do something to stop it!

"The battle front today is against the hoarding of currency. No one will deny that if the vast sums of money hoarded in the country today could be brought into active circulation there would be a great lift to the whole of our economic progress."

So said Herbert Hoover, then US president, in early 1932, and quoted in Murray Rothbard's America's Great Depression (Princeton, 1963). "We are making war on depression. War against a lack of confidence. Our people must have something tangible to do in the fight. There is no use to go out and say 'Have confidence, courage and faith.' They must have something positive to bite on.

"They can bite on the question of hoarding."

Hoover's war on the hoarders presaged Roosevelt's war on fear, with a task force of opinion and business leaders enlisted to make hoarding cash – then outside the banks, under the mattress, for fear of default – socially unacceptable. "It [hoarding] began in April last year in consequential amounts," Hoover told a private White House gathering of newspaper editors and other luminaries that February. "The disturbances in Austria, which finally culminated in the German panic, showed paralleled increases of hoarding in the United States, which rose at one time to about seventy or one hundred million a week...[Then came] the disturbance in Great Britain which finally resulted in the British abandonment of the gold standard.

"Instantly, within 24 hours after the Bank of England ceased paying gold, hoarding jumped in the United States to $250,000 a week."

This was unsurprising. Because then, as now, people kept hold of their money – hoarded it, if you must – for fear of losing it to one of the catastrophes striking so many others around them. And then, as now, US citizens also had the option of what would soon prove a rare privilege, of hoarding Gold Bullion too. In the early 1930s, however, people kept their cash at home, out of deposit accounts, for fear of banking collapse. Gold meantime really was money.

Keeping gold at home – out of circulation and safely away from bank credit – was therefore bad for the nation. It could not be allowed to persist, and Hoover's successor, F.D.R., wasted no time in making Gold Bullion illegal for everyone but the State, nationalizing private gold holdings at $26 per ounce, raising the official price to $35 per ounce, and thereby enforcing on the United States the very Dollar devaluation which gold hoarders had feared.

Bite on that. Or to put it another way, just because you hoard gold or fear bank credit today, doesn't mean you are in need of treatment or tough love.