END_OF_DOCUMENT_TOKEN_TO_BE_REPLACED

So, who gets to play Lehmans in this repeated money farce...?

Paying income tax, or any kind of tax it would seem, has been entirely optional. Which should have powered its economy like 1960s' Hong Kong.

But public spending accounts for 40% of GDP. So who financed that spending if so few people paid?

Last year, only 15,000 of Greece's 11-million population declared an income above €100,000. The government only got round to making shop receipts mandatory this week. Tax evasion is thought to cost the Greek purse €15 billion per year ($20.5bn). The untaxed "shadow economy" accounts for some 25% of annual output.

Yes, untaxed business accounts for one Euro in five generated in Spain, Portugal and Italy, or so reckons one Austria-based economist. But what the sub-prime Euro states of "Portugal, Italy, Ireland, Greece and Spain" lose to their shadows (say "PIIGS" like Monty Python would say it to get the real City joke) is nothing next to the gap between income and spending now looming for pretty much the entire Western world.

Greece, in short, is but Northern Rock in this farce. The first bank to collapse – and thus the first to get rescued – it now looks a mere footnote to the historic crisis which followed. Neither the cause nor a "domino", the Rock was more than a warning.

It announced the crisis was on. The scramble for tin hats began... 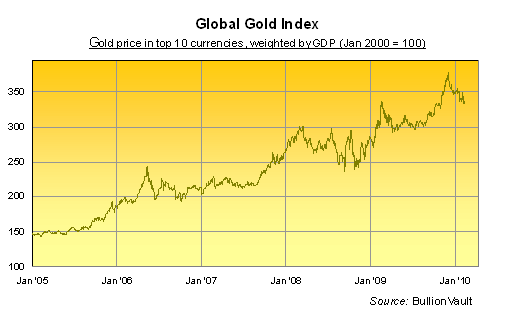 On Weds 12 Sept. 2007, Northern Rock – the biggest employer in Newcastle-Upon-Tyne...sponsor of the city's football team...and the fastest-growing of the UK's fast-growing mortgage banks – ran a banner advertisement across the front-page of the national press.

It offered 6.30% interest on new deposits, then more than 250 basis points above the average return offered by High Street savings accounts. Clearly, the bank needed cash in a hurry. Such a hurry, in fact, that on Thursday it had to arrange an emergency loan from the Bank of England.

Come 9am Friday, queues were forming at its branches across the country, and Northern Rock's stock promptly dumped 20%. On the following Monday, the government effectively rescued the bank's savers, guaranteeing their deposits in full. And from then until Feb. 2008, when nationalization finally came, the sovereign embrace of tax-payer ownership was only a matter of time.

Of course, the Rock's demise wasn't the first sign of trouble. August '07 saw inter-bank interest rates jumped to a near-nine-year high. Both Bear Stearns and BNP Paribas had already closed certain mortgage-investment funds to withdrawals. A handful of smart-arses pointed to the 40-to-1 leverage at leviathan banks such as Lehman Brothers.

Fast forward to early 2010, and the US and UK are running record peacetime public-purse deficits. Late last year, Dubai suspended (and then restructured) repayments on a chunk of its debts. The cost of insuring government bonds against default has risen sharply for more than a month.

So...who gets to play Lehmans in this comedic repeat?

For all London's dithering and dawdling, saving the Rock was never in doubt. No politics or ideology stood in the way of protecting depositors with their own taxes. But making German savers pay the wages of Greek civil servants? That's another thing altogether. Either the Greeks take a wage cut, or somebody stumps up, or the central bank simply prints money, or Greece will default on its debts as bond-buyers vanish.

Writ large across the developed world's spending, we'll thus need the Martians to help...or perhaps we'll ask God for a loan...if the ever-greater cradle-to-grave promises made after WWII aren't wound back before they come due. Alternatively, we could just keep printing more money.

After all, it worked to stem the crisis in banking.

"A sovereign debt crisis in the West is coming sooner or later though it is probably not right now," says Christopher Wood in his closely-followed Greed & Fear analysis for CLSA.

"This is why the recent correction in Gold is an opportunity to buy more bullion and more gold mining shares" – a defense, says Wood, against the "almost inevitable Western currency debasement which will be the consequence of the increasingly untenable welfare states and related social security systems."

It wouldn't be the first time a sense of impending doom sparked a fresh move worldwide into physical Gold Bullion. And until (and unless) the next crisis in debt becomes the last ever...the mother of all crises...it won't be the last either.