END_OF_DOCUMENT_TOKEN_TO_BE_REPLACED

Everyone wants the Swiss Franc except the Swiss...

ZERO-RATES the world over have caused a whole heap of mischief so far. But this really is starting to get very silly, writes Adrian Ash at BullionVault.

"Switzerland may be better off adopting the Euro as the Franc's appreciation hurts exports," reports Bloomberg from Basel.

"It's a nightmare for everybody," the newswire quotes Thierry Stern – chairman of luxury watchmaker (and glossy-magazine benefactors) Patek Phillipe – amongst others.

"We have to adapt. Something will come. I don't know when, but one day it will happen."

Industrialists are always in favor of devaluation, of course. Who do you think approved and drove Germany's Weimar inflation in the early 1920s? And with export sales accounting for one half of Swiss GDP – pretty much the same proportion as Germany enjoys – the thought of abandoning the Franc shouldn't really shock your local bar-room economist. The get-ahead Euro sure helped Germany extend its competitive edge inside the currency union. No wonder the idea's fast gaining ground, as Bloomberg reports.

The Franc is so "strong" right now, Swiss exports recovered barely 7.1% year-on-year at last reading. "In Germany, sales abroad jumped 15% in the same period," the newswire explains, pointing its finger squarely at the "safe haven" Franc. Rising by one-tenth vs. the Euro since March 2010, it's not even slipped against gold so far in 2011...! And what good's a currency that doesn't lose value? 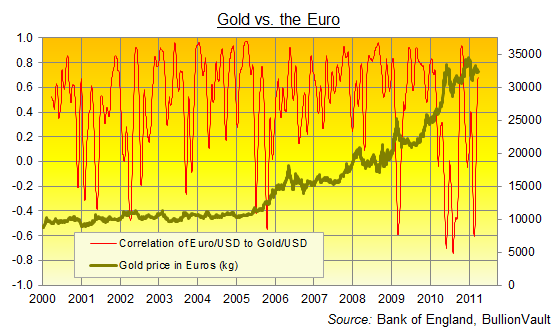 Time was, as our chart of the Gold Price in Euros shows, that the Euro itself was "as good as" Buying Gold.

Butting up against €10,500 per kilo for the first 5 years of the single currency's new century, gold didn't break out until mid-2005. And see how gold's correlation with the Euro – the extent to which it moved in the same direction as the single currency, versus the Dollar, on a rolling 1-month basis – was pretty high throughout? It regularly peaked just shy of a perfect 1.0. Which meant that gold and the Euro very nearly moved exactly together. Only once did that correlation drop below minus 0.4, as gold and the Euro briefly moved in opposite directions.

Now compare and contrast with that middle period, when gold and the Euro moved together more often still against the Dollar...but gold consistently out-stripped the single currency's gains, delivering sizeable returns to French, German and Italian owners. Since the start of 2009, in contrast, and especially since the start of 2010, the Euro and gold have spent a good deal of time going their own separate ways – mostly gold up, Euro down as it happens – taking the metal to new all-time highs for European holders.

History buffs may well recall that gold's current Dollar bull market – long-lived but far from steep enough to be called a "bubble" just yet – began just after the Euro was launched, right around the time the Swiss public voted to remove the Franc's famous gold-backing. Just as the gold sales which followed failed to knock the gold price lower (indeed, gold then turned higher after a 20-year bear market), so the loss of gold backing has so far failed to debt the Franc's safe haven appeal. So too has the Swiss National Bank embracing inflation, slashing its base rate to zero, and actively creating new Francs solely to dump them into the forex market in a bid to depress their value.

Seems you can't keep a "safe haven" down, in short. Not when retained wealth worldwide needs to escape money-printing and zero rates at home. What options are left to anxious savers? What choice but the Euro is still open to the Swiss National Bank...?

"I don't see any chance that the flow of money into Switzerland will change," says a New York money manager quoted by BusinessWeek. "People just want to get the heck out of the Euro." People except Swiss exporters that is.

Anyone caught in the middle might want to consider Buying Gold instead.