END_OF_DOCUMENT_TOKEN_TO_BE_REPLACED

Tinkering with interest rates is failing to control the bubble in world money supplies...

YOU ONLY have yourself to blame. Consumers in the West, rich in credit ratings if not cash, shouldn't have borrowed and spent so much money when interest rates hit a half-a-century low in 2003.

Nor should consumers have continued to borrow and spend when the rate of interest slipped below the inflation rate – making debt pay as cash savings lost real value – over the next two years.

And we really should haven't have accepted all those super-low teaser mortgages...0% charge cards...and money-back deals on shiny new SUVs...when the global money supply began to balloon between 2005 and 2007.

Should the cost of living now shoot higher, then our monetary masters at the West's central banks will stand ready to say: "Told you so!" Because they themselves, of course, have got nothing to do with the problem. 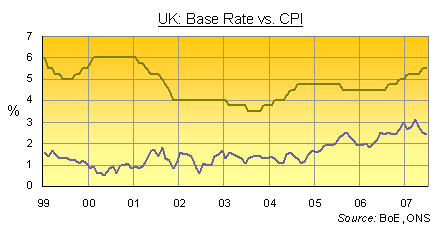 "The sooner households begin to acknowledge the consequences of higher interest rates," warned Bank of England member Tim Besley in a speech this month, "the greater is the chance of a smooth adjustment towards a level of consumption consistent with maintaining the inflation target in the medium term."

In other words, "Stop – or your monthly mortgage fee gets it!"

Besley's logic, like his task as a central banker, is simple enough. The more people spend, the more they risk pushing up prices. The mechanism is made plain enough by a quick glance at the residential housing market – and Besley might as well have been wagging his finger at consumers across the Atlantic as well as in the United Kingdom, along with households in Australia, New Zealand, South Africa, Spain, Ireland...

Wherever household debt has exploded, funding an explosion in house prices and consumption, the solution looks clear: Make money dearer, and inflation will recede. Indeed, "it is a widely accepted proposition in the economic profession," as the European Central Bank noted in its most recent policy statement, "that a change in the quantity of money in the economy will be reflected in a change in the general level of prices."

The task of central banking, in short, is to maintain the quality of money – thus preserving its purchasing power – by limiting the quantity that's sloshing around. 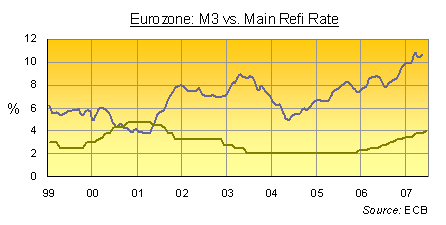 Trouble is, the Western world's central bankers seem to have lost control over the very mechanism they claim turns higher interest rates into lower inflation. The supply of money – the actual quantity of cash and near-cash financial instruments now flooding the globe – has shot higher even as the Fed, Bank of England and ECB in Europe have begun making debt more expensive.

European money supply is now growing at a near-two decade record. The United Kingdom is witnessing the fastest growth in money supply since the late '80s. In the US, where the Fed stopped reported broad "M3" money supply at the start of last year, the quantity of money is reckoned by several respected analysts to be growing by 10% per annum or more.

Classically defined, inflation means exactly this kind of growth in the quantity of money. Capping it with higher borrowing costs makes sense in theory. That was how central bankers led by Paul Volcker at the Federal Reserve finally got round to killing the Great Inflation of the late 1970s. It took them more than one attempt, too. 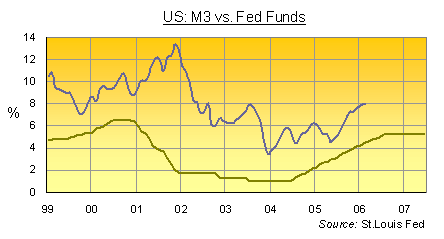 "Many government officials throughout the free world became monetarists in the 1970s," writes David Hackett Fischer in his grand history of price inflations, The Great Wave. "Major efforts were made by the Federal Reserve Board in the United States and the Bank of England in the United Kingdom to stabilize their disordered economies by regulating the money supply. These efforts were not successful and actually increased instabilities."

"Economist Milton Friedman raged against the errors of his own disciples," notes Hackett Fischer, "repeatedly accusing the governors of the Federal Reserve System and the Bank of England of grievous incompetence."

But as John Kenneth Galbraith replied, "An economic policy needs to be within the competence, however limited, of those available to administer it." In other words, a solution proposed is no solution at all if it proves impossible in practice – and perhaps a return to some kind of Gold Standard would prove just such a non-solution today.

"The global derivatives market grew nearly 40% in 2006," as Robert Rodriguez of First Pacific Advisors, an $11-billion investment fund, noted in a speech to the CFA Society of Chicago late last month. "The amount of contracts based on bonds more than doubled to $29 trillion. The actual money at risk through credit derivatives increased 93% to $470 billion, while that amount for the entire derivatives market was $9.7 trillion.

"The International Monetary Fund, in its April 2006 Global Financial Stability Report, estimated that credit-oriented hedge fund assets grew to more than $300 billion in 2005," Rodriguez went on, "a six-fold increase in five years. When levered at five to six times, this represents $1.5 to $1.8 trillion deployed into the credit markets."

Tinkering with interest rates has done nothing to cool this bubble in money and near-money substitutes so far. A classical Gold Standard would mean restricting future growth to the 1.3% growth in above-ground gold stocks each year. But would it be possible?

Squashing the global supply of what now passes for money into the even broadest measure of world gold holdings – the outstanding stock of 153,000 tonnes now reckoned to sit above ground – would most likely mean destroying the economy first. That's why, like the tame monetarism practiced by central bankers in the late '70s, it's unlikely to work.

Just try getting a Gold Standard past Congress...no matter how bad inflation becomes! Asking politicians to defend the value of money would be like getting David Beckham to concentrate on his game, not his pay-check. It sounds like a key part of the job spec', perhaps even the most essential part of the job as far as L.A. Galaxy are concerned. But elections aren't won by politicians who admit that defending the value of money – most particularly after an unprecedented bubble in credit and debt – would almost certainly guarantee a recession.

"As the restraint took hold," said Paul Volcker, former head of the US Fed, in a speech 10 years after he raised US interest rates to 19%, "one country after another was caught up in recession or an extended period of stagnation." Even central bankers need to make their own mortgage repayments each month, of course, and raising interest rates to slow inflation will never be popular. Raising them so far that your neighbors lose their lose jobs is a tough call to 'fess up to at your local barbecue.

What's more, the mere idea of a Gold Standard has suffered a bad rap ever since Winston Churchill took Great Britain back to a fixed value for the Pound Sterling against gold in 1925...and doomed the country to depression by applying the pre-World War I exchange rate. The British government's debt, meantime, had ballooned more than 11 times over since 1914 to pay for the blood spilt in Flanders, and the cost of living had doubled. Pretending that One Pound in 1925 could be equal to One Pound in 1914 meant that soon "England’s government coffers [were] full," as one French observer put it, "but the economic situation is poor...and its industry is operating at half-speed. From every side, you hear complaints that British producers can’t possibly compete with foreign suppliers..."

Dismissing the return of a Gold Standard today, however, isn't to say that gold doesn't hold any monetary value. Indeed, the only real question for investors and savers: Why wait for the rest of the world to catch on?

If the bubble in credit and money hadn't grown so large in the first place, we wouldn't need to defend ourselves with a lump of shiny yellow metal. Now gold continues to gain in value whilst all official world currencies sink to reflect the deluge of money created so far this decade.

Perhaps that's just where we've got to in the long-term history of credit and money, bubbles and busts – awaiting the whirlwind now due after sowing so much bad debt.