END_OF_DOCUMENT_TOKEN_TO_BE_REPLACED

The total number of M&A deals in the world's broad mining sector grew by 69% in 2007 according to PriceWaterhouseCooper's latest Mining Deals report.

All told, the value of mergers, acquisitions and direct equity sales in listed world mining companies reached almost $159 billion, up by 18% on 2006.

But in the precious-metals sector, the value of corporate activity fell by one-third from to reach $21 billion. That was only just above the M&A total for gold & silver mining stocks in 2005, according to PwC's analysis of the 'M&A Global' database run by the Dealogic consultancy.

And no, it wasn't the global credit crunch starting in late 2007 that crimped corporate gold-mining on the stock market. 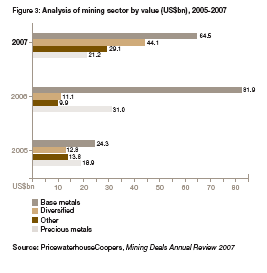 "There was little evidence of a slowdown in deal activity as a result of the credit crunch," writes Tim Goldsmith, head of the PwC mining report team.

"Indeed the number of mining deals announced in the fourth quarter of 2007 was more than double the level recorded in the corresponding quarter of 2006."

Given the surge in Gold Prices – alongside silver and platinum – that started as the Federal Reserve began slashing US interest rates in mid-Aug. to try and fend off banking failures and broad stock-market losses, you might expect precious metal M&A deals to have surged, too.

Okay, Yamana Gold's $3.4 billion purchase of Meridian in June '07 was the fifth largest mining deal of the year.

Coming in at No.9 was Anglo-American's $2.6bn sale of a 22% stake in Anglo Gold Ashanti – the world's fourth largest gold mining company – to institutional investors via stock-market shares.

But reducing its exposure to the Gold Price, the highly diversified Anglo American instead chose to grow its iron-ore assets. And the bottom line remains, says PwC, that "the precious metals sector [operates on] a different set of economic metrics."

Perhaps it's an arbitrary split to separate "precious" metals from all the other shiny minerals dug up by from deep below ground the world over. "Silver has become an industrial metal," as Philip Klapwijk of the highly respected GFMS research firm notes in London. "Over 50% of silver is now used for industrial purposes."

So "silver is more vulnerable to a setback in the industrial metals complex than Gold," he said in a recent interview. The other white metals – platinum and palladium – also rely on industrial demand to keep their prices buoyant.

And with so much "froth" in the platinum market right now (it's almost doubled in the last 12 months), its fortunes going forward will depend on "the degree that global car demand is affected by a global economic slowdown," says Klapwijk.

Gold Bullion, in contrast, is famously useless as anything other than a store of value. Still classed as a "monetary asset" by governments and central banks the world over (they remain the single largest hoarders of Gold after all), it remains only one step removed from the day-to-day currency markets and banking system. In the very big scheme of world monetary history, we're only a flutter of eyelashes away from the last gasp (to date) of the Gold Standard in 1971.

And the more central bankers destroy the value of cash – first with sub-inflation interest rates, and then with unlimited credit aimed at bailing out bad investments across the banking sector – the more private individuals may turn to Gold as a reliable store for protecting their wealth.

Back in the corporate world of deals, fundings and investment banking, meantime, "competition for [M&A] deals is intense" says PwC, pointing in particular to a surge in spending by mining companies based in China and Russia.

But not in gold or silver mining stocks.

Firms from these two countries grew their mining deals six times over between 2005 and 2007 to reach $32.7 billion. Last year's Russian and Chinese-led M&A accounted for one fifth of the world's total mining deals.

Yet even though precious metals deals in the Asia-Pacific region grew almost threefold, it was base metals – the copper, nickel, aluminum and iron ore under-pinning China's breakneck infrastructure build – that saw the real growth.

And in Russia, the value of corporate deals in precious metal mining reserves fell by more than 86% to just $500,000. Diversified mining stocks, in contrast, saw Russian M&A activity grow five times over, while African gold & silver spending slipped by one quarter. Precious metals firms in South American suffered a 30% drop in corporate activity.

Might this situation reverse now the global banking crisis has capped the flood of cheap-money available to investment bankers and their clients?

"In large part," the new PwC report goes on, "private equity buyers are not so active in the mining sector as in other sectors. The risk-reward equation in the mining industry limits the scope for using debt and the need for specialist mining expertise prohibits the additional management value that can be injected."

Seeing how the number of corporate mining deals being lined up at the end of last year managed to grow in spite of the credit crunch, it's just possible that precious metal stocks – the Cinderella stocks of 2007's M&A ball – might get a turbo-charged coach to the party.

But fresh digging on the stock market wouldn't add a single ounce of physical Gold Bullion to the world's gold-mining supplies this year. Down by 1% or more last year on most professional estimates, total world gold-mining output has failed to rise as investor demand and the Gold Price have shot higher.

A sudden surge in mergers and takeovers won't do a thing to reverse the decades of under-investment or missing discoveries that gold-mining executives say are becoming a serious headache. Nor would a surge in gold-mining M&A conjure up the "lost generation" of geologists and mining engineers who studied finance and banking instead during the '90s, before taking the corporate elevator on Wall Street, rather than the cage on a winch in the world's gold fast-shrinking fields.