END_OF_DOCUMENT_TOKEN_TO_BE_REPLACED

So much Gold Bullion, but so much more paper and wood-pulp on top...!

THE GOLD PRICE just broke through its downtrend – the line joining its tops – from summer 2011's record high. Or so technical analysts studying the price charts will tell you, says Adrian Ash of BullionVault.

Just as in late 2007, however – from where gold began a 55% run inside 6 months – the price jumped Wednesday on a very fundamental fact: the price of money, specifically Dollars, the world's #1 currency for trade and central-bank reserves.

Back in 2007, the catalyst came as a baby-step rate cut of 0.25%, signaling the Fed's switch from raising to destroying the returns paid on cash savings. Now the Fed's new zero-rate promise "took gold comfortably clear of the 50, 100 and 200-day moving averages, and opened up some big targets to the upside," says one London technician. The previous ceiling of $1700 has become a support level according to bullion bank Scotia Mocatta, "with further key support at the 200-day moving average at $1645."

Whatever you make of such diagnostics, it's worth stepping back to see the wood for the trees. Because the trend in who's Buying Gold, and why, is so plain to see that you hardly need join the dots.

Gold Bullion holdings amongst the world's central banks, for instance, have risen to a 6-year high, according to data compiled by the International Monetary Fund. Emerging and developing nations have swollen their gold reserves 25% by weight since 2008. The debt-heavy West is a net seller, but only just. 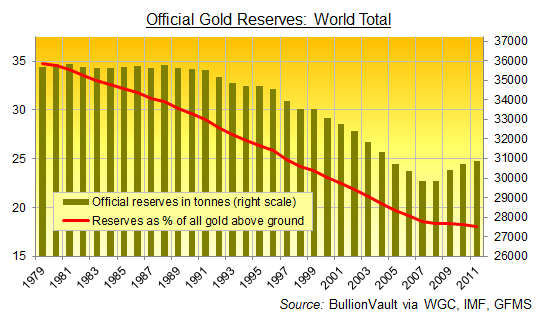 "There's a perception perhaps that gold is no longer a crucial part of the financial system in the way that it was under the Gold Standard before 1970, 1971," as Marcus Grubb of the World Gold Council put it in an interview with Tekoa Da Silva this week. "But in fact that's not really true.

"Because even with the ending of the Gold Standard, gold remains as an asset held by the world's central banks...and you've seen a trend recently for gold to become more and more a part of the fabric of the financial system."

A good chunk of this weaving is due to official reserves. But as our chart shows, central banks control a shrinking proportion of what's been mined from the ground. A far greater tonnage of gold again is finding its way into private ownership, and there – as Marcus Grubb notes (the WGC is an investor in Bullion Vault, by the way) – it's having a greater still impact on how money and finance work.

First, private individuals have led the rediscovery of Gold Bullion as a financial asset, rather than the decorative store-of-value it had become by the close of the 20th century. Institutional finance has caught up, however, and gold is now in front of the Basel Committee on global banking, proposed as a "core asset" for banks to hold – and count as a Tier 1 holding – for their liquidity requirements.

After all, turnover in London's bullion market, center of the world's gold trade, is greater at $240 billlion per day than all but the four most heavily traded currency pairs worldwide. Turkey's regulators already acknowledged physical Gold Bullion as a Tier 1 asset for its commercial banks starting in November, with the cap of 10% worth some 5.5 billion Lira ($2.9bn) according to Dow Jones. And a growing number of investment exchanges, meantime, as well as prime brokers, now accept gold as collateral, posted as downpayment by institutions against their commodity and other leveraged positions.

Gold Bullion pays no interest of course. But in our zero-yielding world, that only puts it ahead of where the capital markets are being herded by central-bank policy anyway. Nor does gold have much industrial use (some 11% of global demand in the 5 years to 2011), a fact which highlights its unique "store of value" attributes. Being physical property, gold is no one else's debt to repay or default. Being globally traded, it's deeply liquid and instantly priced. And being both rare and indestructible, it couldn't be any less like "money" today. 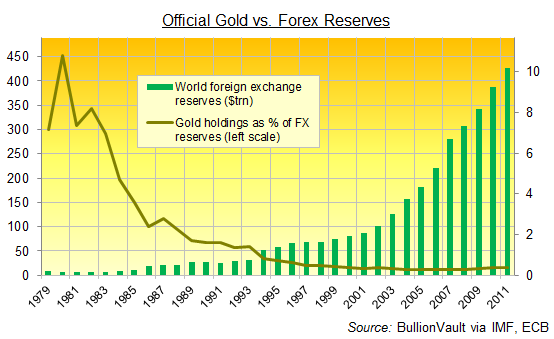 Scarcely a lifetime ago, gold underpinned the globe's entire monetary system. Outside China, which tried sticking with silver, the compromised and then bastardized Gold Standard which followed first World War I and then World War II still saw the value of central-bank gold reserves vastly outweigh the paper obligations which those banks gave to each other.

Even three decades ago, 10 years after the collapse of what passed for a Gold Standard post-war, central-bank gold holdings still totaled some three times central-bank money reserves by value. But look at the decade just gone – the 10 years in which Gold Investment beat every other store of value hands down. Pretty much every currency you can name lost 85% of its value in gold. Yet the sheer quantity of new money pouring into central-bank vaults saw their gold holdings only just hold their ground.

Gold's rise, in short, has been buried under wood-pulp. To recover its share of central-bank holdings as recently as 1995 would now require a further doubling in value. To get back to the 1980s' average would require a 15-fold increase. Or, alternatively, a 93% drop in the value of foreign currency reserves relative to central-bank bullion holdings.

Such a trend is not yet in train, neither on the charts nor the fundamentals. The US Dollar remains the biggest reserve currency, weighing in at 62% of stated reserves according to IMF data, down from its peak above 71% in 2001 but more than equal to its share in the mid-1990s. Even so, as former FT columnist and current ButtonWood at The Economist Philip Coggan writes in his latest book, Paper Promises:

Coggan rightly notes that China isn't the only large creditor, and nor does it hold anything like the dominance which the US held at the end of World War II. But whether this switch starts today or only starts to show 10 years from now, such a change of direction can't be discounted to zero. Repudiation of government debt – the form which most foreign currency reserves take – will only begin with the Greek bond agreement, perhaps leading first to a rise in US Dollar holdings but also highlighting the ultimate risk of holding paper promises. And that fear, of having to write off money thanks to default or devaluation, is clearly driving the rise in Gold Buying by central banks already.