END_OF_DOCUMENT_TOKEN_TO_BE_REPLACED

HOW COME everyone's suddenly bullish on gold? I mean, where have they been for the last six years?

Gold offers a refuge against bad times ahead. Like all good insurance, it's best bought before trouble arrives – not during or after.

And just how much worse can the news get from here?


But watch out below! Because with inflation surging and new credit shrinking, "we're in a nasty environment," as Tim Bond, head equity strategist at Barclays bank in London, said in a new report last week.

Above all, "there is an inflation shock underway," he wrote in Barclays' latest Global Outlook. "This is going to be very negative for financial assets. [So] we are going into tortoise mood and are retreating into our shell.

"Investors will do well if they can preserve their wealth." And investors who choose to Buy Gold are usually looking to achieve just that.

Indestructible, un-inflatable, and instantly priced in the world's only true globalized market, gold bullion stands apart from all of those boom-time investments. Stocks, bonds, securitized debt, real estate...you can keep 'em when the end of the world strikes.

These happy assets promise to pay you income. They also rise in value as the economy grows. Whereas Gold, in sharp contrast, just sits there – neither smiling nor frowning, and never paying an income. Its value comes from, well, from its gold-ness alone.

And as the spike above $1,000 an ounce showed in mid-March – just as Bear Stearns collapsed – you need the end of the world to make Buying Gold worthwhile. 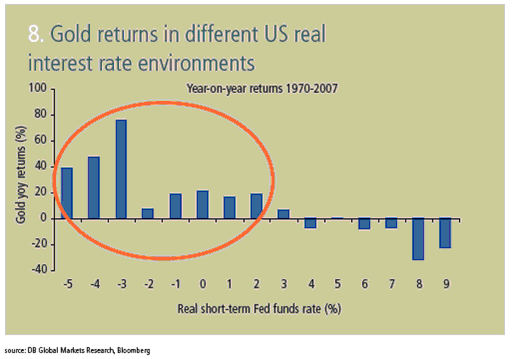 Because the value put upon gold – as BullionVault has noted all-too often before – should also be expected to benefit from sub-zero real rates of interest. War and terror be damned! The only sure push that Gold Prices need is low interest rates colliding with rising inflation.

And right now, the world's got that in spades.

Listen up at the back! Because the Federal Reserve's key interest rates stands at just 2.0%, scarcely half the rate of US consumer-price inflation. And with a real return paid to cash of minus 200-basis points, you really should doubt the Fed's true intent towards the value of money from here.

Even with the Euro trading above $1.57 on the foreign exchange markets, however – and even with the European Central Bank (ECB) promising to raise interest rates to defeat inflation next week – the Eurozone's 320 million consumers are also suffering a 12-year record rate of wealth destruction. Here in the United Kingdom, after inflation and tax since the middle of 2003, the real returns paid to cash savings have stuck right on zero since mid-2003.

The fast-growing economy of India, meantime, offers negative real interest rates of 3% and worse. Taiwan's real interest rates sit slap bang on zero after a rate-hike this week. And Chinese cash savers are way under water with inflation running at 7%.

Any wonder that "the number of credit cards in circulation jumped 93% in the year ending March 31 to 104.7 million," as the Asia Times quotes the People's Bank of China this week...? Central banks everywhere want you to spend money, not save it, forcing the issue by destroying the value of money itself.

So any wonder that the world bid for Gold – a tangible asset that can't be inflated and can't be destroyed – just keeps rising higher...? "The purpose of money is to be a store of value," said Dr.Marc Faber – the infamous fund manager behind the Gloom, Boom & Doom letter – to CNBC today.

(He kept laughing for some reason. No doubt he's long gold...)

"When interest rates are negative, it destroys the wealth of honest depositors who have their money in the bank and don't want to speculate," Faber went on. "Now what people should do, basically, is to Invest in Gold. Because when it comes to action, the Fed show no concern about inflation...

"The policies pursued by Mr.Bernanke have damaged the American public enormously by pushing commodity prices – specifically food and oil prices – much higher. And so real incomes are going down and discretionary spending is being hurt very badly."

Gold represents wealth, in a word. Just remember that it won't actually grow wealth, because it's not a productive asset. Whatever else you might want from a metal, wealth preservation is the gold buyer's best hope.

And that might prove all investors can ask if the news on inflation and rates, stocks, bonds and jobs, doesn't start getting better.