END_OF_DOCUMENT_TOKEN_TO_BE_REPLACED

AS WE NEVER TIRE of boring anyone who'll listen here at BullionVault, it's not inflation alone that makes Gold Prices rise, writes head of research Adrian Ash.

If it were, the last decade's four-fold rise would be missing, and gold wouldn't have dropped by three-quarters during the 1980s and '90s.

Sure, the cost of living has increased since 2001 – no doubt about that. And yes, the real value of money has contracted as global money supplies have surged. But the pace of change doesn't compare with the 25% suffered by UK consumers in 1978, nor the 8% annual average hitting US consumers between 1971 and the end of 1980.

So the common link between the 1970s and the last decade of rising Gold Prices is a little more complex than inflation alone. But only a little.

Because it's the failure of interest rates to keep pace with inflation that matters. 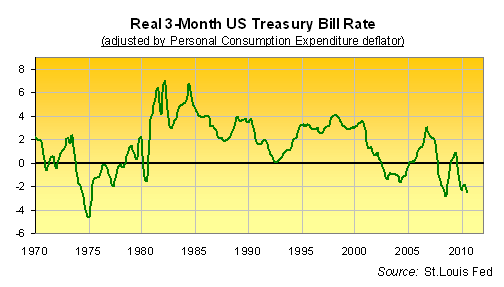 A caveat: You shouldn't try trading in and out of Gold Bullion using this indicator. That plunge in real rates on the chart above, for instance, of early 1980 proved a feint, as investors soon discovered after piling back into gold when it bounced from a 40% plunge. Similarly, the rise in real rates of 2006 didn't make for a sell signal. The underlying trend, it turned out, was still down for rates...and up for gold. And short term, plenty of other factors can get in the way as well – be it mid-term US elections, the Indian festival season, or a global guessing-game of whether the Fed will print eleven or twelve zeroes after the figure $1 when it meets next week.

That policy, remember, is designed to mimic an interest-rate cut. Because interest rates already have already been slashed to zero, known as the "lower bound" amongst policy wonks, who now feel they need to somehow overcome the "zero bound" by printing money to help devalue it faster. Goldman Sachs reckons that, creating $4 trillion next Wednesday, would be "equivalent to a cut in interest rates of 3%". Even so, the investment bank's analysts complain that we'll probably get a measly $2 trillion instead.

So, let's take the vampire squid at its word, and imagine that the Fed goes for a two and twelve zeroes – whether immediately, or dripped out of Washington over a period of months. On Goldman's maths, that would eat a further 1.5% off the real rate of interest (not) being paid by 3-month T-bills...and so such a move (and notional outcome) would take real returns down to minus 3.9%.

For US savers, that would be the worst level of real returns to cash since the start of 1975, back when US inflation was running above 10%. That same month, almost 36 years ago, the Gold Price hit what proved an intermediate peak, slipping by almost one-half as real interest rates then climbed up towards zero. (Like we said, real rates aren't a dead-set signal for short-term direction.)

Real returns paid to cash then failed at zero, however, and slipped back – while gold rose 8-fold again – before the Volcker Fed finally set about "wringing inflation out of the system" in mid-1980 with double-digit overnight rates.

If you expect Ben Bernanke to wring anything but cash-savers' necks in the next year, then please – go ahead and sell Gold Bullion. And if you want to know what happens if inflation subsides, as he keeps claiming it will, watch out for Part II next week.