END_OF_DOCUMENT_TOKEN_TO_BE_REPLACED

WATCHING SOMEBODY ELSE fall flat on his coccyx skidding on a banana-skin always raises a laugh. Not least in that divine comedy called money and finance.

"It took three generations," wrote a professional metals consultant in Feb. 2009, "but we now seem to have reached the point in the world's history where, for the first time, gold is valued only for jewelry use and speculation.

"The metal today has rapidly diminishing monetary use..."

Whoops! Within a matter of weeks, two of the world's biggest monetary powers – Russia and China – publicly said they wanted to discuss including gold in a new global "basket" to replace the Dollar as reserve No.1...

"What of the idea," The Economist then asked last week, "that China has [already] diversified into other currencies? The statistics are hard to make sense of [because] the State Administration of Foreign Exchange (SAFE), which manages the country's reserves, does not disclose such details."

"Just as it was a mistake to assume that the good times would keep on going in the 1990s," Christopher Davis now writes for MorningStar, "it's equally foolhardy to expect lackluster stock market returns to continue forever.

"In fact, the stock market has often gone on to post outsized gains after long periods of drought. [So] the moral of the past 10 years isn't that you should give up on stocks. To the contrary, it's probably a better time to invest in stocks than anytime in years..."

Well, at least he's trying. Because the funniest pratfall a forecaster can make is mistaking where she or he skips today for the path things will continue to take forever and ever, amen.

"Gold has a future, of course, but mainly as jewelry," declared finance historian Niall Ferguson 10 years ago, at the very close of the 20th century. Falling in price for almost two decades, "this ancient form of wealth is less an international currency and stable store of value than ever before," he went on.

"It's just another commodity that swings to the global rhythm of supply and demand."

Plenty of other historians and analysts – plus Europe's big central banks – queued up to throw dirt on gold's coffin, too. The Financial Times, Economist and BusinessWeek all announced the "death of gold" as the Nineties neared their end. Gold-mining directors leased gold and sold it, locking in then-current prices for fear of raising still lower prices in future.

You'll therefore forgive our caution today. Because after what then happened to gold – rising four times over and more against each of the world's major monies – making a grand call at the end of Gold's Decade would be a true buffoon's gambit. Tripping over a forecast only raises a laugh when it happens to somebody else.

So first, let's re-tie our laces and scan the pavement ahead for slapstick bananas.

"We calculate the market cap of all above ground gold, including central bank reserves, equals about 1.4% of global financial assets," reported John Hathaway of Tocqueville Asset Management a little over four years ago.

Fast forward to the financial crisis/meltdown/deflation/depression of early 2009, and by our maths here at BullionVault, investor stress still remains low compared with those historic extremes.

That's not to say Gold Prices MUST rise, of course. Just that they haven't risen, in terms of the world's wealth, anything like previous bull runs in the value of gold.

Yes, we're ignoring unlisted business, because the numbers just can't be found. And yes, we also ignore both derivatives and real estate, because the one is unfunded (and simply too big to settle) whilst the other only counts as "investment" when you're gearing up with another guy's money.

But against this under-played $161 trillion total in paper wealth worldwide – spread as it is across cash, banks, bonds and stocks – the value of gold compares at some $4.4 trillion, or scarcely 2.7% of the total. And that figure, please note, includes all gold ever mined in history, rather than simply the investment bars, monetary coins and tradable jewelry beloved of south-Asian consumers.

Whether as teeth, bracelets or micro-chips, best estimates (courtesy of our friends at GFMS via the World Gold Council) reckon just 2% of the 161,000 tonnes un-earthed over the last 5,000 years has been lost for good, slipping down the back of the sofa or buried beyond the reach of metal-detectors. Yet it's the total supply we use here, meaning the number above once again over-states gold as a proportion of investable wealth – a risible 2.7%.

Which again makes gold's still-tiny size all the more note-worthy when you consider what's supposed to have happened to the alternative choices for storing your wealth. 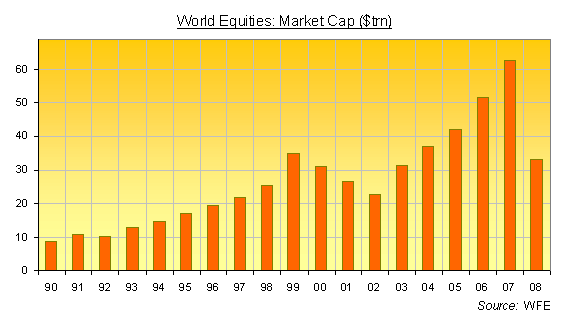 "At the low of 1974," as Mark Hulbert of the eponymous Financial Newsletter noted on CNBC last week, "average P/Es were around five or six. This time they were down more in the low 'teens..."

Indeed, the apparent "bear market" low of early 2009 saw US stocks trading for 13 times earnings – only a little below the 130-year average of sixteen. 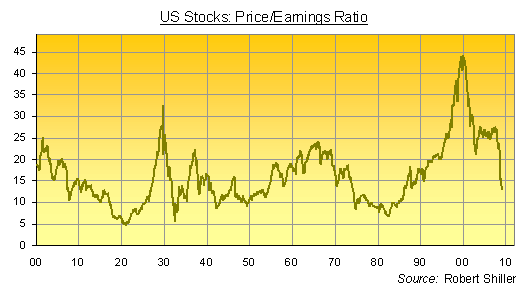 "So you know," Hulbert went on, "it's hard to say that market-wide we were at values at all reflective of a major market bottom like in December '74."

"And dividend yields were at what, seven per cent?" chipped in anchor Joe Kernen. "Which they would've been now, if everyone hadn't cut their dividend!"

"That's right," confirmed Hulbert, "and it's interesting that at the bottom of a terrible recession [in late '74] you still had high dividend yields, whereas now we're not anywhere near those kinds of yields.

Outside the boardrooms and on the trading desks, meantime, "Where was the universal excess bearishness that typically marks the end of major bear markets?" asked Albert Edwards of Société Générale pointed out when global stock-markets hit their new low point in March.

"Before I can go overweight equities, I need not just cheap valuations, I need to see despair and revulsion," Edwards said. Which hardly squares with today being "the best time in years" to buy stocks given the chorus of bulls calling the bottom last month.

Still wary of stocks, the world could yet go further over-weight bonds, of course. Which would certainly make governments happy, seeing how many bonds they're going to issue this year in a bid to finance their historic, structural and unavoidable short-falls. Or maybe corporate bonds appeal, what with interest rates already at all-time record lows amid the worst recession since WWII, but without (as yet) a significant jump in defaults. They're also getting no rarer, but the value has already tipped lower. Worldwide – and in US-Dollar terms – the outstanding stock of corporate bonds shrank by 14% in 2008. Outstanding government debt, in contrast, swelled by one tenth (again, in terms of US Dollars) as new issuance of public-sector debt rose by a fifth compared with 2007.

Or maybe you'd rather choose cash...now paying less than even official inflation per month in pretty much every major economy. Again, you'll need to ignore that pesky risk of default (this time by banks) as well as the fresh flood of printing. Or perhaps you'd rather buy into private equity and small, local businesses...what with taxation set to surge (and keep surging) to try and pay for the worldwide stimulus in due course, while private borrowers keep competing with that flood of AAA-rated debt pumped out by the state.

None of this makes gold a buy in itself, of course. But Buying Gold still makes an unpopular choice against the broad mass of alternative stores of value. Which might just prove close to a tip if history's your guide.

Compared to the Great Depression or inflationary wipe-out of three decades ago, the world's wealth remains very under-invested.