END_OF_DOCUMENT_TOKEN_TO_BE_REPLACED

Storing value, rather than trying to grow it, is once again taking the lead...

GOLD PRICES go up when cash and bonds fail to beat inflation. It was true in the 1970s, and it's been true again in the last decade, writes Adrian Ash at BullionVault.

Both times, gold also beat both stocks and industrial commodities as well. Perhaps because storing value, rather than trying to grow it, takes precedence when the cost of living eats into your capital. 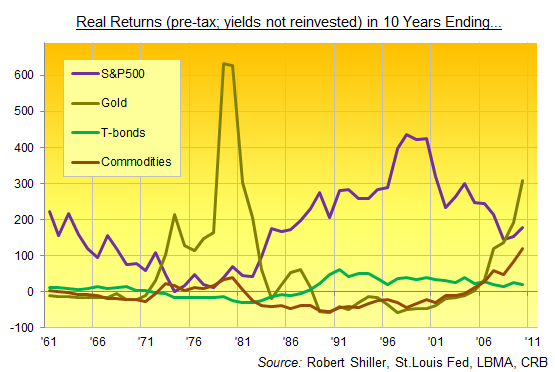 But now, from here, what will Gold Prices do?

And never mind that economists-who-know-how-to-do-their-job are all too often now in a different job, trying to run the economy rather than observe it, and opting everywhere to devalue money at the fastest pace – accounting for post-inflation interest rates – in well over three decades.

No, "Whichever inflation measure you prefer, there's no reason to tighten," as DeLong's fellow economist Paul Krugman puts it, blogging at the New York Times.

So what if inflation goes negative – making real interest rates positive, even if the official rate is slashed even to zero? Outside early-2000s Japan and the global wipe-out of spring 2009, modern history offers no examples.

Both times, expert economists urged policy-makers to cut nominal interest rates below zero somehow, either by printing money to excess or taxing bank deposits or generally destroying cash, so that real rates could also stay negative.

Both times, gold rose in nominal and real terms as well. What gives...? 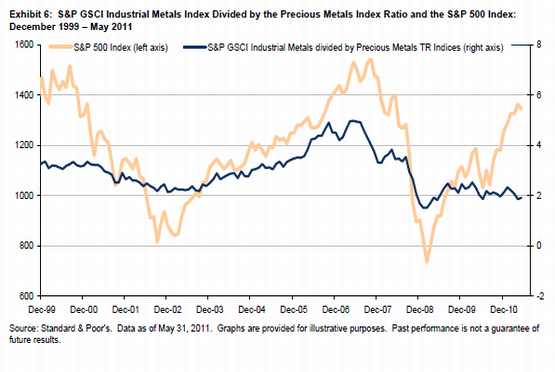 Here in May 2011, there's a "disparity developing" between industrial and precious metals, notes the latest Commodities Market Attributes report from Standard & Poor's.

Dividing its own S&P GSCI Industrial Metals Index by the Precious Metals Index, the agency tracks the relative strength of useful metals against the less industrially useful (but more socially valuable) metals gold and silver.

"This ratio generally has been positively correlated with the S&P 500 [US equity index]," says the report. Which makes sense, because industrial demand and risk-capital will tend to move in the same direction. But "the ratio declined again in May," says S&P, down "to essentially the same level it hit at the end of May 2009.

"What is disconcerting for many analysts is the fact that the S&P500 has increased 54.23% over the same two-year period. The implication is that extremely low interest rates and quantitative easing are likely influencing the level of real assets. At the same time, the ratio of demand for direct economically-related industrial assets...is not keeping up with the demand for store of value assets."

More telling still, S&P's Market Attributes also prints a chart of the S&P equity index against the ratio of gold-to-silver prices. It shows (see page 5) how a falling ratio – with gold becoming less valuable in terms of its industrially useful cousin – usually coincides with rising stock markets. But the gold-silver ratio has just jumped, up from a three-decade low near 31 ounces of silver for 1 ounce of gold to 40 and above.

"Risk-Off and Demand Destruction," is how S&P's report sums up May 2011. Pointing to the rising value of gold – against silver, the other industrial commodities, and common stocks – is simple shorthand, too. Because storing value, rather than trying to grow it, also takes precedence when the risk to your capital is that it might vanish altogether as debtors and businesses go bust amid a true deflation in prices.

That's if deflation gets chance, of course, before economists and central-bankers get to work destroying your savings first.

Thinking of storing some of your savings as a Gold Investment?...