END_OF_DOCUMENT_TOKEN_TO_BE_REPLACED

The Gold Price has suddenly become extremely volatile – as these three charts show...

A YEAR OR SO BACK, the Gold Price was quietly making new record highs above $1300 and then $1400 per ounce. It was also so placid that volatility in its daily swings hit the lowest level in half-a-decade, writes Adrian Ash here at BullionVault.

This was hardly the stuff of a mania. And it only made Buying Gold a simpler decision for new and existing investors, especially those borrowing money to do it on the derivatives market. Whereas this summer's surge to (and sharp drop from) $1920 an ounce has already thrown a fat chunk of "hot money" out of the trade. 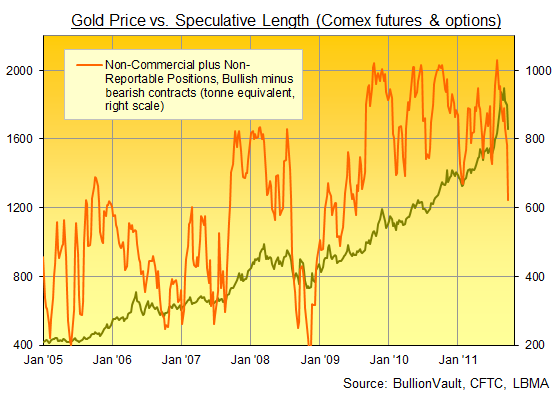 As you can see, leveraged speculators are fleeing the gold futures and options market at the fastest pace since Lehman Brothers blew up in Sept. 2008. Already shrinking by 40% since the new record peak of start-August, their "net long" betting on the Gold Price (simply the number of bullish minus bearish contracts) has crashed to barely 600 tonnes equivalent – the smallest level since mid-2009, and a level first reached at the tail-end of 2005.

Now, whichever came first – chicken or egg, price drop or hot-money flight – the end result so far this autumn is a jump in price volatility last seen at (you guessed it) Lehman Brothers' collapse. 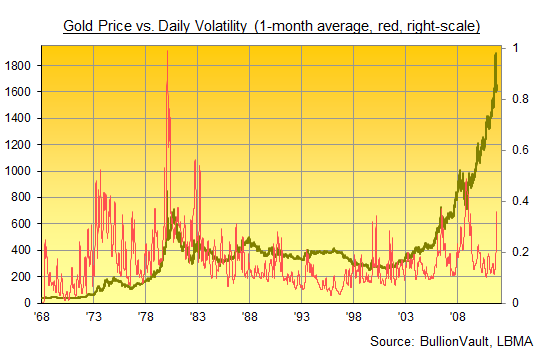 "With Gold Price volatility doubling, and Gold Prices dropping by more than 10% in just three days [last week], these characteristics no longer apply to gold."

But this loss of what was apparently gold's "safe haven" status hasn't diminished demand. Quite the contrary in fact for physical gold buyers, both in Europe and the US but more critically in the world's No.2 consumer – and fastest-growing source of demand – China.

Reports from bullion bank and secure logistics contacts all point to a surge in gold buying from Asia, with large 400-ounce bars being sucked out of London for turning into kilo-bars in Switzerland to be shipped onto China. Price volatility still applies, however. With bells on. 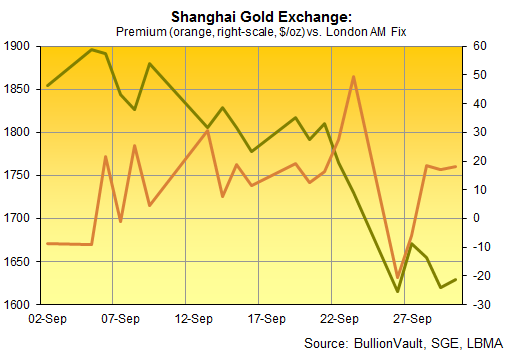 If you've struggled over the last month with gold's new volatility, then pity buyers and sellers on the Shanghai Gold Exchange. Violence in the domestic Chinese Gold Price has been worse by one fifth than in US Dollar prices on the London Fix – still the global benchmark price almost 100 years after the end of Great Britain's imperial gold standard.

That's because London is still central clearing for the vast bulk of the world's gold, where it sits ready for shipping wherever else it will find a use. Increasingly, that somewhere else is China, even though it's now the world's No.1 mining producer each year. Chinese refineries lead new applications to produce London Good Delivery bars, the 400-ounce wholesale standard worldwide. Yet no Chinese-made bars should (as yet) have reached London's Good Delivery bullion vaults, despite their producers devoting themselves to gaining LGD accreditation. Because China's borders are closed to exports of gold.

This one-way traffic – into China – helped last year to plug the 360-tonne gap between China's world-beating mine output and it's galloping demand for gold. The huge volatility in Shanghai premiums over London gold is of course a function of the metal's underlying volatility. But it's clearly being extended by the logistical bottlenecks and delays that are guaranteed to hit this very physical trade, now trying to ship ever-more Gold Bullion from the other side of the world.