END_OF_DOCUMENT_TOKEN_TO_BE_REPLACED

Looking forward to the end of this Gold Price bull market...?

IF YOU'VE BEEN following along, then you'll remember how gold can make financial crises fun, writes Adrian Ash at BullionVault.

Gold Price bulls have been so short of worries to keep them awake at night, in fact, many will no doubt be grateful for the 20% plunge of late 2011. Y'know, just to keep their hand in.

"We think the peak would be towards the end of this year or maybe some time in the first half of next year," says Neil Meader, research director for GFMS, the precious metals consultancy acquired by news-wire, data and dealing-terminal providers Thomson-Reuters in 2011.

The trigger for gold's final top and decline? "Anything that really signals to the market that the structural imbalances and the various problems affecting the strength of various currencies are moving behind us, that we are moving beyond this current financial crisis situation," says Meader, speaking to TheStreet after launching GFMS's latest Gold Survey Update in New York on Tuesday.

Now, whatever you make of that risk, gold investors should perhaps be pleased to see the world's leading data and analysis provider flagging such an event. Because like pullbacks in a bull market, it can only be healthy to consider the inevitable end every so often. 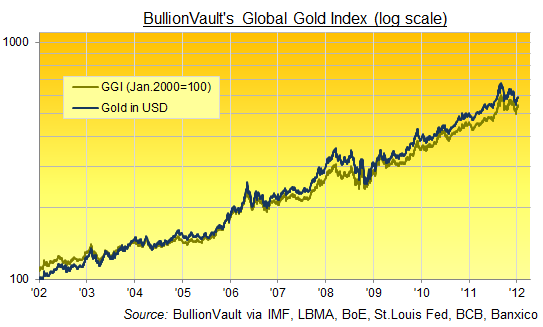 In particular, says Neil Meader, "One overt trigger that is worth looking for is the start of a serious ratcheting up of interest rates. Because, for Gold Investment to be popular, you do need really low interest rates."

Of course, the risk of higher interest rates in 2012 looks about as high as interest rates themselves right now – i.e., zero. Even where the cost of borrowing or the return on cash is better than nothing, it isn't after you account for inflation. And as BullionVault never tires of reminding people, it's that rate – the real rate of interest – which really matters to the ebb and flow of gold demand in the end.

Let's not rehearse the mechanics here, beyond noting the gut instinct savers worldwide retain for favoring rare, indestructible Gold Bullion over inflation and bank-default risk when cash-in-the-bank lags the cost of living. Hence the rise in global Gold Prices, rather than just in Dollars, over the last decade. It shows clearly in our Global Gold Index, mapped above.

BullionVault's GGI prices gold against a weighted basket of the world's top 10 currencies, as measured by the size of their issuing economy. So yes, the Dollar is top, then the Euro, Chinese Yuan, Japanese Yen, British Pound and so on. The GGI has risen 5-fold over the last decade, just like the S&P index of the 500 largest US corporations did in the 1990s. Unlike the S&P, however, gold hadn't already risen 5-fold in the 15 years previous.

History says the gold bull market cannot run forever. GFMS have long noted that the "Gold Price will eventually change direction." But pending the big downturn in gold prices, and whether or not it show up in late 2012 – or early 2013, or maybe a bit after, if not whenever this financial crisis is finished and things get back to what we used to call normal – here's 3 things likely to make gold owners reach for the Valium at some point or other this year:

#1. Europe
Oh sure; gold offers unique insurance against default or devaluation, because it can't be created or destroyed, and it is no one else's liability to renege on (so long as you own it outright). Short term, however, a credit squeeze is likely to force up the Dollar and drain liquidity from derivative markets, including Gold Futures. Repeating the impact of Lehman's 2008 collapse, Europe's credit crunch in the second-half of 2011 forced the collapse of broker MF Global, further helping the speculative position in US gold futures fall in half. That's certain to dent prices short term, even if Gold Investment demand for physical bar and coin is surging for fear of the political and monetary reaction.

#2. China
The middle kingdom is supposed to be an unalloyed good for gold prices. Disappointing both GFMS and ourselves by failing to take out India's top spot in 2009, it's likely to stand closer still as world #2 in 2012. But unlike investors here in the developed West, Chinese gold demand clearly shows a significant and positive link with economic growth – and no one yet knows how a credit squeeze or "hard landing" might affect the globe's fastest-growing demand for physical bullion. Our guess is that tight credit and stalling income growth wouldn't be good for gold. Beijing's response might be, however, if 2008-2009 is a guide.

#3. Volatility
Guaranteed in 2011, volatility in Gold Prices still lagged US equities, but that's small comfort if you imagined owning gold really would let you sleep through the night undisturbed. Owning physical property, in law, means you escape credit, not price risk. That's quite the advantage over packaged financial-services products today, but for retained wealth trying to hide from the storm in gold, rising volatility is known to dent India's household buying, the world's largest single source of demand. Imports fell 8% by weight in 2011, thanks to a near-collapse in the final 3 months. There's also a plain risk that – after rising each year since 2001 – the recent whip-sawing of the gold price might dissuade Western investors, too. After all, if gold is supposed to be a "safe haven" amid any event, it failed in the second-half of 2011, even though it's tripled during this 5-year crisis so far.

There, all that noise should help keep you awake tonight. As for tomorrow, there are plenty of other nightmares threatening your wealth elsewhere. Surging real interest rates paid to your cash savings shouldn't be one of them.