END_OF_DOCUMENT_TOKEN_TO_BE_REPLACED

What sort of "liquidity trap" is marked by this boom in financial assets...?

"There is too little money in the economy."
– Bank of England governor Mervyn King, 19 October 2010

SO the US CENTRAL BANK, the Federal Reserve, remains dead-set on creating inflation, and it's plain to see why, writes Adrian Ash at BullionVault. (Catch up with Part I here...)

Household debt in the US now stands so large, paying it down to 2001 levels – as a proportion of income – would require a drop in consumer spending of $2.7 trillion, some 18% of this year's gross domestic product. Deleveraging to 1990 levels of gearing (again, a then-record at the time) would cost US households $3.5 trillion, well over a quarter of their 2010 incomes.

It ain't gonna happen, in other words. Not this side of Paul Krugman joining John Maynard Keynes in that eternal "long run" in the sky. So what's needed, or so the theory runs, is inflation in prices. It would make deleveraging very much easier, as happened during the last retrenchment, back in the early 1980s. Consumers got to pay down debt without...well, without paying it down! And that gave households enough confidence (and rope) to start expanding their debts again.

Y'know, like the corporate sector is already doing today...

"We do have to wonder just what sort of 'liquidity trap' we are in – a state of paralysis where only cash will do, remember – when US (indeed, global) high-yield [debt] issuance hits its highest on record, as it did this past quarter," writes Sean Corrigan of Diapason Commodities at the Cobden Centre.

"We also wonder just what sort of 'liquidity trap' we are in when equity IPOs increase 55% in value and 215% in number from the same period in 2009.

"We further wonder just what sort of 'liquidity trap' we are in when US-based [mergers and acquisition] rises 22% year-on-year, with private-equity involvement up 117% to a two-and-a-half-year high and, as such, [is] responsible for more than 10% of all deals.

"We wonder, too, just what sort of 'liquidity trap' we are in when the number of ETFs grows 22%, their assets rise 14%, and trading volumes jump 15% in the first nine months of the year."

But while all the money spat out since late 2008 by the Federal Reserve and its friends in London, Tokyo, Frankfurt and Zurich has indeed found a home – and a home where it's fast multiplying, too – it hasn't yet reached the "economy". Not the "economy" that you, me and Mervyn King at the Bank of England think of when we use the word – meaning our neighbors' pockets.

Because although central banks can raise asset prices, as well as the cost of living, by nakedly slashing the value of cash...and even though they can do it with greater success than the Japanese beta-test of 2001-2006 – when the Nikkei-225 just about got back to break-even, rather than adding two-thirds as the S&P 500 has done since early 2009...they have yet to reverse unemployment or raise household incomes. So even with debt falling in real terms, households lack the inflated incomes they need to take advantage. 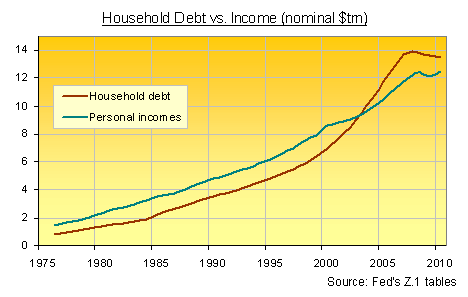 Yes, Washington's official Consumer Price Index may indeed be a joke, just like today's near-zero reading of inflation. Yes, the US Bureau of Labor Statistics itself admits that, if international standards are applied, CPI rose 1.9% in the year-to-Sept., rather than the 1.1% headline reported. And yes, John Williams' Shadowstats puts the true rate of US inflation some four times higher again, way up at 8% per year, simply by applying the methodology used by Washington back in 1980.

But inflation in prices is only making things worse – not better – for consumers, because inflation in wages is entirely absent. That's unlikely to change with unemployment running at either 10% (official), 17% (the old U-6 measure) or perhaps 22% (Shadowstats, again). The top of the debt cycle – now three years since – therefore remains structural, because households cannot and will not raise their borrowing.

The recent past – and likely future – of the US economy, therefore, really is another country. Japan, in fact, as this chart from PragCap so neatly shows...

Looking ahead, Step #1, we guess from here, will see the Fed keep pumping money into the banks – and thus into commodity and financial markets – until inflation on the official CPI finally shows up. Or hyperinflation. Or a hot war with China. Or a sweeping Democrat victory in Utah. Whichever happens first.

Let's call it the "Krugman Trap" – the belief that, when an idiotic policy fails, it must be repeated and raised to the power of, say, the number of idiotic things you can say in one column for the New York Times.

Step #2 – once this super-sized idiocy fails to work, again – we'll likely see the Fed stop buying Treasury bonds, and try instead to jivvy up corporate spending and bank lending by buying commercial debt, equity funds, or even real-estate investment trusts direct. Never mind that debt issuance and equity prices have had all the help they might need; it's what Japan is about to try, 20 years after its bubble blew.

So why not steal a march on Tokyo, and apply its latest ideas right now?

"With growth in private final demand having so far proved relatively modest, overall economic growth has been proceeding at a pace that is less vigorous than we would like," said the Fed chairman in his recent speech, Monetary Policy in a Low-Inflation Environment.

"In particular, consumer spending has been inhibited by the painfully slow recovery in the labor market, which has restrained growth in wage income."

If only inflation in prices would spark inflation in wages – or consumers just did what they should and got back to borrowing and spending – then the recovery would be upon us! Even though, as noted above, the household sector in aggregate has lost all appetite for extending its debts without retrenching first. So finally, and unless sanity breaks out at the next Jackson Hole summit of central bankers...and barring the intervention of hyperinflation, a hot war with China, or the Democrats winning Utah...we move to Step #3 – outright gifts of cash to US households, personally delivered by the Fed chairman in a Santa outfit, if not buried in disused coalmines.

Because that's what it will take to get US households spending more than they earn again any time soon. And it's a trick the Bank of Japan has yet to try...so hey – it might just work!

"In reality," writes Nomura economist Richard Koo in his 2008 book, The Holy Grail of Macroeconomics, "borrowers – not lenders, as argued by academic economists – were the primary bottleneck in Japan's Great Recession. If there were many willing borrowers and few able lenders, the Bank of Japan, as the ultimate supplier of funds, would indeed have to do something. But when there are no borrowers the bank is powerless."

You can lead a horse to water, and you can drown the bloody thing if you want. But you can't make people borrow when they've barely begun to pay down the greatest credit bubble in history. The problem for retained wealth, therefore, is trying to second-guess what Dr.Ben's patented deflation cure – the one he urged on Japan's central bankers around a decade ago – will do to your money while you're waiting for inflation to show up.