END_OF_DOCUMENT_TOKEN_TO_BE_REPLACED

The little-known state of the gold market right now...

YOU WON'T read this in your Sunday paper's financial pages, nor elsewhere online this weekend. But this autumn's gold rush has been no such thing in fact.

No one's actually Buying Gold right now. Not the physical metal (and not the exchange-traded trusts either), not at anything like the rate they were buying a year or six months ago. Instead, this rush differs in kind from the surge of autumn '07 or the panic of late '08. Because it's a rush almost solely in leverage.

Hedge funds and prop desks have been buying Gold Futures and options with virtually free finance. Hence the surge in stocks, bonds and commodities too, of course. Because anything traded on margin looks a safe bet when finance costs you 1% or less per year. And especially when your major funding currency – the long mighty but now tired and emotional Dollar – is universally condemned to fall further.

John Hathaway of Tocqueville Asset Management called a similar rush into gold a case of mistaken identity back in late 2006. "Perhaps hundreds of billions of new institutional money has flowed into the commodity sector," he wrote. "Gold was caught in the cross fire..."

Here in late 2009, however, the institutional money is borrowed, not cash, and the prime brokers (formerly known as investment banks) are doing the lending with government-guaranteed finance. Since end-August, open interest in Comex gold contracts has swollen by more than one third...the fastest jump since late 2007, back when the Fed began slashing rates, oil vaulted towards $150 per barrel, and the run on the banks really got started.

And whatever you think about gold-industry players wantonly shorting the market, no one forces speculative funds to take the other side of those trades. Given the jump in prices – up 11% since the start of Sept. – you can see who's making the running. 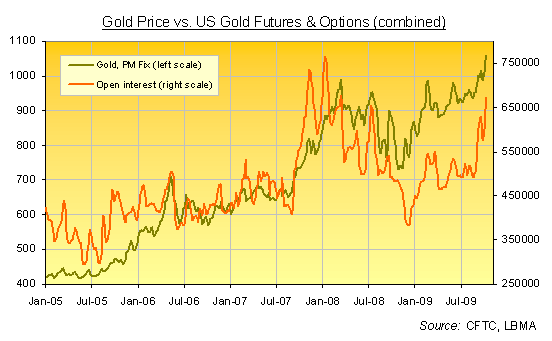 Now we've got zero per cent rates and outright money printing by the big four central banks (a.k.a. "quantitative" and "credit" easing at the Fed, Bank of Japan, ECB and Bank of England). But private investors don't feel the same fear as when their bank accounts threatened to vanish – and their retirement savings dumped half their value – this time last year.

Yes, the doctors and dentists are in ("Fill 'em...drill 'em" as an options broker once put it to me), but it's the large speculators – meaning hedge funds and money managers – who are sitting on a record net long position, holding well over nine bullish bets for every short contract they've got. 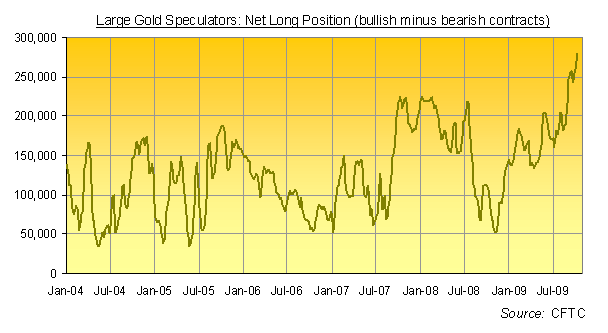 New routes to cost-effective gold ownership continue to grow (well, they do here at BullionVault, with our users adding 38% to their stock of physical gold so far this year. Client property doubled over the first nine months of '08.) But overall, retail investment in physical metal has weakened sharply from the record demand of Sept. last year to March 2009.

London's GFMS consultancy says investment off-take from the physical market fell by two-thirds in the second quarter from Q1, and everything points to a further sharp drop in Q3. Coin-dealer mark ups on bullion pieces have fallen in half on average, back to 5% above spot from the genuine "gold rush" of this time last year. No one's saying they're sold out today. Big-name dealers were offering 3-week delays and worse in Oct. '08. The best that promoters can say now is "Plenty of stock available..."

Collectible coins face the same hesitation. "Normally aggressive buyers were guarded in their buying," reports Numismaster's Harry Miller from last week's CoinFest convention. "While not stating it openly, I think many feel the premiums on numismatic issues are outdone at current levels, and bullion itself needs a rest."

Amongst the exchange-traded trust funds, the same story – no matter what the minor trusts might have you believe in their PR campaigns. The huge SPDR gold trust, now holding more gold than all but the top five central bank hoards worldwide, swelled 60% in the six months to end-March. It's added barely 8% since. London's incumbent leader, GBS, has shrunk from its April peak. Overall, the total ETF positions that the World Gold Council tracks added barely 2.2% between July and end-Sept.

"Thing is," as a professional wholesale dealer here in London's bullion market told me today, "the ETFs still don't show any signs of shrinking when the price takes a dip. They're as sticky as ever. But no, overall, physical flows at the moment are nowhere as strong as they were. The action's very much in the futures."

Conclusions? For the fees we charge at BullionVault? That would be asking too much! But until a larger number of savers spots the trouble in 0% rates and central-bank money creation, it's big speculators using borrowed money who look set to keep making the running in prices.