END_OF_DOCUMENT_TOKEN_TO_BE_REPLACED

From TTT through KFC to a wholly different Gold Investing landscape...

THIS isn't your father's bull market in gold, writes Adrian Ash at BullionVault. It most certainly ain't your grandfather's either.

Getting a handle on Gold Investing amid the Great Depression was all about the same three T's as it had been for centuries – teeth, trinkets and terror. But freed from fixed-price control as the last vestige of the Gold Standard collapsed, the gold market then morphed by the end of the 1970s into KFC – a finger-lickin' combination of Krugerrands, futures, and those "certificates of confiscation" that were government bonds paying way less than inflation.

The late 20th century's "Great Inflation" saw Gold Coins pour into Europe from South Africa, while US investors geared up their gains (and subsequent losses) on gold derivatives. By the end, and with Gold Prices more than 20 times higher inside a decade, the supply of gold coming back to market – from all those old teeth and trinkets – swamped new demand. The slow death of inflation, killed by double-digit interest rates, then moved in to kill gold again. Because what was gold for if no-one could afford to buy jewelry but investors no longer needed inflation defense?

Fast forward to 2011, and a glib 3-letter handle is as tough to find as a collapse in gold's fundamentals or a positive real return on bank savings today. As a proportion of total flows, Gold Investing demand has now been greater than its peak at the 1980 top for three years running. Yes, supply from jewelry sales has shot higher again – 13% greater between July and Oct. alone from the same period of 2010 – but new coin and bar demand continues to swallow it whole, and then some on top.

Put another way, "It would be imprudent to expect the gold market to behave as it has done in the past," says the latest Gold Demand Trends report from our friends at the World Gold Council. Because over the last 40 years, the internal shape of the market – the supply and demand fundamentals – have undergone "dramatic change". 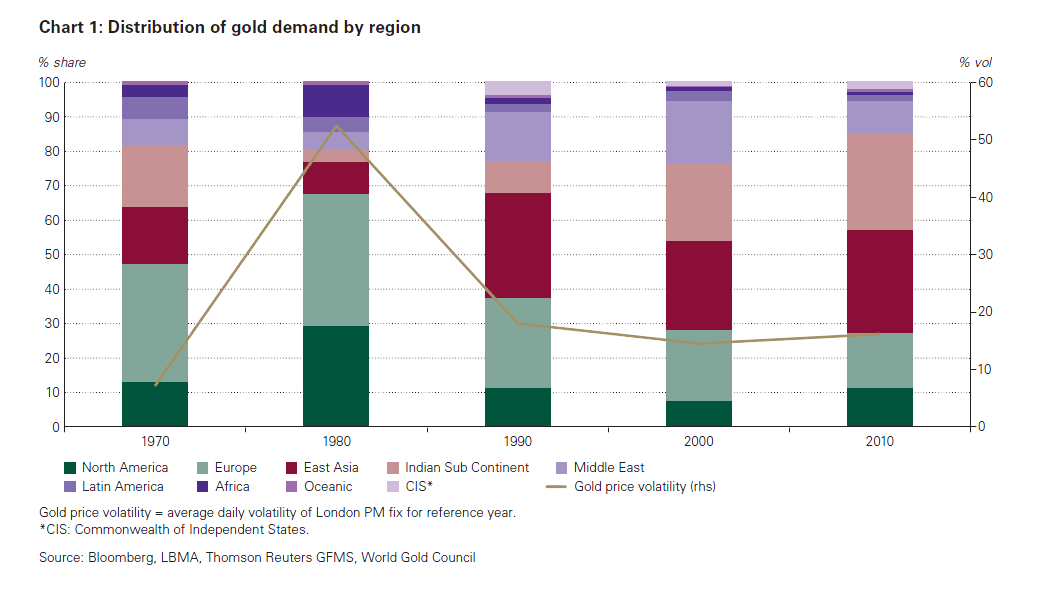 The clear trend, as you can see above, is a move from scattered, uneven components to a more steady, balanced dynamic, whether in the source or type of demand (i.e. jewelry, industrial or Gold Investing) or the source and type of supply.

But at 28% of total off-take, China was by no means the sole pillar of dominant. Indeed, "Europe was for the first time in a long time the largest single Gold Investment market – bigger than the US or China," said Grubb. While the accumulation of physical gold rolls on in Asia, the underlying bid for gold is spread across the globe. That's a very different pattern to the big top of 1980. Oddly, perhaps, it's been this way since the bear-market lows of a decade ago too, as you can see on the WGC's chart above.

So might this balance of global gold demand tip out of kilter again? Gold bar and coin demand is increasing in both India and China, said Grubb, and "we continue to believe you will see strong demand from both." The possible fall-out from "a hard landing" in China's double-digit economic growth apart, "the pure demographics in India [plus] China's high saving rate [make] it hard to see how the level of demand in tonnes will decline" from here.

Growth rates may slow – and sharp volatility, especially at record-high prices, such as Indian buyers are suffering now – will plainly dent demand short-term. But a decline in Asia's underlying appetite is unlikely, the WGC thinks, thanks to India and China's "very strong demand profile." This long-term bull run doesn't rely solely on Western investors and savers looking to flee the financial crisis, in short. It's further supported by a four-decade record in central-bank buying and, of course, private household demand from the world's two fastest-growing major economies. Oh, and a record-low rate of new gold mining discoveries, despite record-high exploration spending.