END_OF_DOCUMENT_TOKEN_TO_BE_REPLACED

Both inflation & deflation are re-arming today. Might Gold provide cover for private investors...?

SO WHICH WAY now for financial assets? Given what pumped them up from late 2002 onwards, better to ask which way for money itself.

Less money would mean lower prices – the very opposite of what the world calls "inflation". And if cash becomes scarce as its once-gushing supply starts running dry, so too will the hope of watching any investments go up.

"The markets are telling us to prepare for hard times, and a global spate of the worst deflation to be seen in generations," believes Richard Russell, author of the Dow Theory Letter since 1957. He points to August's 20% fall in crude oil and Gold.

"Brazil's Market Price Index recorded 0.12% deflation in August's preview," reports the Gazeta Mercantil, as if on cue, "against 1.79% inflation a month before. The Wholesale Price Index decelerated to -0.44% from 2.28%"

"The growth of [US] credit is slowing sharply," chips in Gabriel Stein, writing from London for Lombard Street Research. "The cause of weaker broad money growth is not difficult to find." 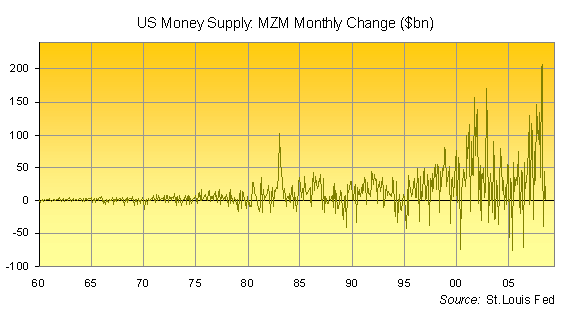 Based on Stein's guess-work (the chart shows official Fed data; you'll see why guess-work is needed in a moment), he pegs the change in US money supply at "a $50 billion plunge" in July – "the biggest monthly drop since data began in 1959," as Barron's reports.

"One month does not make a trend," as the magazine says. And never mind either that month-on-month volatility in the US money-supply (as measured by the broad MZM aggregate of cash, bank deposits and finance-house money funds) now sits right on its four-decade average. "Lombard Street Research calculates the three-month growth rate [in money supply] is just 2.1%, well below the six-month rate of 6.3% and the 12-month rate of 11.5%.

"All of which" – apparently – "show broad money growth decelerating rapidly."

Thus the bubble in debt that blew up in summer '07 is now clearly contracting and shrinking fast. Even the evening news can explain why.

Hence the 7% bounce in the Dollar, previously down by one-third from 2002, inside a month. Cash becomes king when cash becomes scarce, and the Dollar's still cash when all's said and done.

Thus today's "Big Two" ex-Dollar assets – crude oil and Euros – pulled down base metals and food-stuffs on the world markets, along with the great anti-Dollar of Gold. So-called "large speculators" cut or quit their leveraged trades so fast, in fact, one-in-five long positions in gold futures vanished in the week-ending 12th August.

Little wonder. Morgan Stanley and Goldman Sachs will only extend new credit to hedge funds (i.e. let them place new leveraged bets) if their own corporate bonds are rising in value. Or so rumor has it.

If Goldman's bonds rise, allowing it to issue new debt at favorable rates, then it extends fresh credit to its hedge-fund clients, according to the Wall Street Journal. But should Goldman's bonds fall, capping its own flow of finance from the capital markets, then the highly-geared hedge funds must meet margin or quit. Preferably both.

"If our firm is in trouble, we would rather fund ourselves than fund hedge funds," whispers one broker to The Journal. And thus, with less credit granted to drive financial trades higher, the bull market in everything – from stocks and bonds to Gold as well as the 21st century's new "financialized" assets of crude oil and housing – can only turn down. 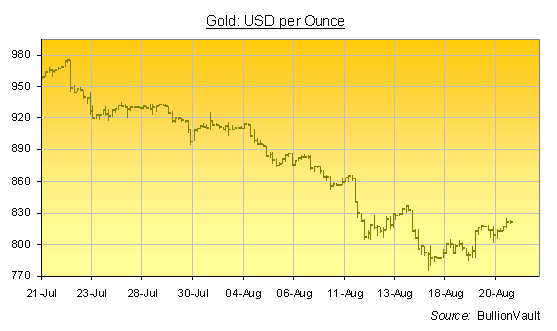 Trouble is, anyone hoping to second-guess the coming deflation in the United States – and therefore in the rest of the world – has to contend with the Fed first.

It stopped reporting (if not counting) America's key money supply figures way back in March 2006. Data-junkies like Gabriel Stein at Lombard and John Williams at ShadowStats can try to plug that gap if they choose, but the official line is to ignore their math. And then in August last year, the Fed began slashing interest rates so low, so fast, the key Fed funds rate now sits 3.6% below the year-on-year rate of Consumer Price increases.

Sub-zero rates of return do not make for a bull run in cash. So if money itself becomes the only worthwhile asset to hold – as Richard Russell contends, even as cash-in-the-bank loses 3.6¢ of its value per year – then truly we're all freakin' doomed, along with the law of gravity and all logic. 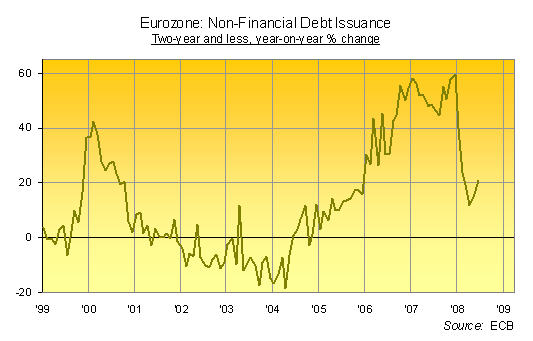 When it stopped reporting the broad "M3 aggregate" used pretty much everywhere else in the world, the Fed claimed the data did not "convey any additional information about economic activity that is not already embodied in M2 [another, but narrower, measure of money] and has not played a role in monetary policy process for many years."

The European Central Bank (ECB) still found M3 useful, however, publishing month-on-month updates for the 15-nation Eurozone of 350 million souls. There are more Euro-notes in circulation today than there are US bills. You can see the surge and bounce in new short-term corporate debt issues – outside the financial sector – above.

The Bank of England here in London, meantime – home to the world's fifth-largest economy – is sweeter still, obliging us data-geeks with the still-broader M4 measure of money. It also provides very telling M4 lending statistics each month.

Any sign of deflation – a collapse in new credit growth – here...? 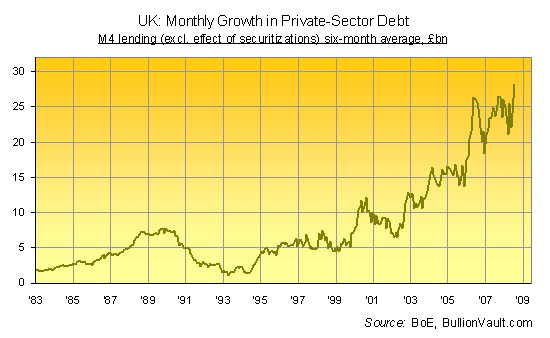 Most crucially for anyone trying to track the supply of money worldwide – even within the Western half only – the latest figures from the Bank of England say borrowing is growing most quickly, if violently, among the lead villains in what Richard Russell, Lombard Street Research and the ever-gloomy Ambrose Evans-Pritchard of London's Daily Telegraph all warn is a deflationary slump.

"Have we reached the moment when gold bugs must start questioning their deepest assumptions?" asks The Telegraph's man. "Have they bought too deeply into the 'Dollar-collapse/M3 monetary bubble' tale, ignoring all the other moving parts in the complex global system? Nobody wants to be left holding the bag all the way down to the bottom of the slide, long after the hedge funds have sold out."

Yet hedge funds, stock brokers, forex dealers and "other financial corporations" have – in the last six months – gone from taking 26% of all new private lending in the UK to swallowing almost one-half. The switch comes as the growth in total new debt jumped to more than a quarter of GDP for the period. These highly-geared financial players borrowed almost £41 billion between them in June (some $75bn) – more than they borrowed in all of 2006.

Who can say where this fresh financial debt is going right now? It's certainly not pumping up Gold, oil, the Euro, real-estate bonds or collateralized debt markets just yet. But monetary inflation is clearly pushing ahead Down Under as well – and also thanks to the financial sector again – even as the Sydney and Melbourne housing bubbles implode. The supply of "broad money" in Australia (meaning notes, coins, private-sector bank deposits and non-deposited borrowing) grew by 17% in the year to June. Australian banks, meantime, raised A$67 billion in new bonds during the first six months of '08.

"That's well above the average $32 billion [in Aussie Dollars] raised in the same period in 2005 to 2007," noted Guy Debelle, the Reserve Bank of Australia's assistant governor for financial markets, at a financial summit in Sydney last month.

Could the hedge funds of Connecticut and Manhattan really be sitting this out? London, Frankfurt and Sydney are filling their boots – to what end, as yet unknown – in a fresh surge of financial gearing. So the shooting match between inflation and deflation remains far from finished today.

Which 'flation will win – inflation and soaring prices...or deflation and a collapse in all things but cash? Richard Russell remarked way back in 2004 that a battle between inflation and deflation then lay ahead. Looks like they're both re-arming today.

Private investors fearing collateral damage might want to take cover. Gold bought near $800 an ounce might just provide some kind or armor.