END_OF_DOCUMENT_TOKEN_TO_BE_REPLACED

Inflation, deflation or both, people choose to Buy Gold whenever money hits crisis...

GOLD'S PREVIOUS bull market, ending with the sharp run up to $850 per ounce in Jan. 1980 and rising more than 24 times over for Dollar investors, came in the 1970s.

That decade gave us soaring inflation, too. So gold, or so everyone says, must deliver its strongest returns when the cost of living shoots higher.

"In the long run, stocks have thrashed gold as great long-term hedges against inflation," as Jeremy Siegel, professor of finance at Wharton University, Pennsylvania, has shown. What's more, the eight-year bull run in Gold Prices so far this decade has come against the lowest average consumer-price inflation since the early 1960s.

In other words, the common opinion of gold as first and foremost a defense from inflation is wildly awry, if not amiss – a point those investors now Ready to Buy  Gold should consider.

Just look at the last 30 years. Consumer prices in the United States, even on Washington's data, have pretty much trebled since 1980. But starting at what was then an all-time high of $850 per ounce, gold simply failed to keep pace. In fact, it dropped half of its purchasing power (monthly data).

At worst, back in 2001, gold's loss of purchasing power for US investors reached beyond 85%. The broad S&P index, on the other hand, stood more than eleven times higher, even as the Tech Crash pushed US equities into a nosedive.

Oh sure, things have reversed a little since then. But not enough to reverse the cold fact of gold's losses during the long, grinding inflation of the late 20th century. It may not have forced an inflationary panic amongst investors; they were happy to buy bonds (corporate and sovereign) even as inflation chipped away at the promised yields. But savers saw the value of their cash shrink by one-half across the developed world, and by far worse across the emerging economies.

"Well," you might hazard, "perhaps Gold Bullion only responds to rapid inflation – the nasty kind we got in the late '70s, rather than the 'mild' case our money has suffered ever since?"

But again, you'd be wrong – or very close to it. Between 1980 and '81, consumer price inflation in the US destroyed 17 cents of the Dollar's purchasing power, an ugly depreciation by any reckoning. Yet the Dollar price of gold dropped 40% during that same period. Longer term over the 1980s and '90s – a truly horrific period of sustained inflation, then averaging 4.6% per year and vicious by any twenty-year comparison in history – the real value of gold sank by more than four-fifths.

Look further back – even to when physical gold stored in government vaults underpinned the Dollar, just as it underpinned all major currencies – and you'll find that gold almost always made a poor hedge against rising prices. In the mid-70s, Professor Roy Jastram at the University of California at Berkeley found that gold failed to keep pace with the cost of living during seven inflations in Britain across more than three centuries. In the United States, Jastram spied six inflationary periods between 1808 and 1976. On average, they saw the purchasing power of gold fall by more than one-fifth!

Only the final period in Jastram's study – beginning in 1951 – saw the metal gain value, and it continued to gain purchasing power for the next 30 years. By the end of 1980, the average annual price of gold had risen more than 17 times over. But right from that top it was downhill for the next twenty years. 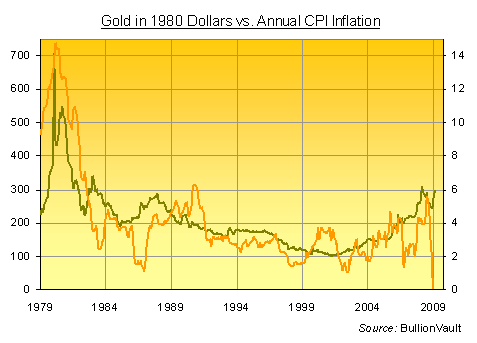 What changed at the start of the '80s? Two things in short order. They were entirely connected.

First, Paul Volcker – the famously tall cigar-puffing chairman of the US Federal Reserve – raised Dollar interest rates to nearly 20%. So second, and as a direct result, the rate of inflation sank from that record peace-time spike above 14%.

Volcker's strong medicine took nearly two years to slow the rate of inflation. But it killed the Gold Price almost instantly. Before Volcker hiked rates – and before he and his successors gained ample room to cut them year after year – "There was a kind of great speculative pressure," as Volcker since said. The Fed noted how "speculative activity" in the gold market was spilling into other commodities. One official at the US Treasury called the gold rush "a symptom of growing concern about world-wide inflation."

So yes, people piled into gold as double-digit inflation and collapsing bond prices destroyed their savings at the end of '70s. And yes, it took a record return paid to cash for the devaluation of money to slow down, allowing a cautious return to risk assets like corporate debt, listed equities and new private ventures – assets whose long-term appeal rests on stable costs and expenses, rather than a speculative guess at how the central bank might set its interest rates from one month to the next.

But now, in contrast, Britain stands on the brink, the United States will likely confirm it on Friday, and Japan's pretty much there – yet again – suffering the horrors of inflation's bleak evil twin, deflation.

Before the 20th century, short periods of falling prices were as common as scurvy, and just as harmless for the long-term value of money and assets. Indeed, deflation is a good thing, for savers at least. Provided their savings institutions stay solvent. And provided their cost of living actually goes down faster than the value of the assets they've saved. Which is not what's happening today. And that brings gold's other key feature – the one investors should note if they buy it as a tightly supplied metal that shot higher in price when inflationary panic struck in the late '70s.

Because fact is, gold also offers a deep, liquid market (if held in its internationally tradable form of large wholesale bars) with no risk of counter-party default (if owned outright, rather than through a trust or a fund or a similar financial structure).

In our debt-deprived world today – where the outstanding value of what retirees and savers are owed is deflating much faster than costs – it's this attraction of gold...it's "off risk" advantage...which is fast-gaining appeal amongst large funds and private investors alike.

Inflation and deflation – both a crisis in money – both also force business and growth to give up. What remains, paying zero and promising nothing, is the need to simply store wealth and savings for a better tomorrow, whenever (or if ever) it shows.