END_OF_DOCUMENT_TOKEN_TO_BE_REPLACED

This time IS different for gold. Different from how everyone sees it, at least...

EQUITY BULLS are so blind to vanishing yields and over-rich price/earning ratios, they apparently need Robert Prechter to tell them to sell, says Adrian Ash of BullionVault.

Blamed for causing a further 50-point plunge in the Dow on Tuesday – precisely the kind of news-driven move that Prechter's Elliott Wave International says just can't happen – he also told CNBC viewers that gold is "over owned" by investors and over exposed in the media.

Thanks to the "non-confirmation" in silver, in fact, after gold hit a new record high in March 2008 – only to...well...hit a series of new records throughout late 2009 – the metal is now fated to fall.

Gold's real bogey man however, says Prechter, is inflation. Or rather the lack of it. You need to quit everything except "cash and near-cash", in fact, because deflation now looms. Which would be disastrous advice if inflation took hold. But the death of inflation, long forecast by Prechter...and even longer forecast by market historian Roger Bootle here in London...is now upon us, apparently, and will see consumer prices fall, the value of dollars and debt increase, and the ultimate inflation-hedge, Gold Bullion, sink without trace.

Which could come to pass. But it hardly explains the last 10 years, let alone the 20 years before that... 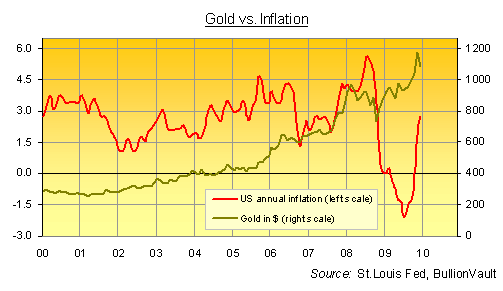 Between August 2008 and Aug. '09, year-on-year inflation in US consumer prices decelerated at its fastest pace in 60 years, dropping by almost eight percentage points to turn negative for the first time since 1949.

Here, if ever you needed it, was deflation in the cost of living (at least on the official CPI measure). The Gold Price, in contrast, rose almost 15% against the US Dollar...gaining more than a fifth vs. the Euro and adding 31% for UK Sterling investors even as their domestic inflation rates sank below zero as well. 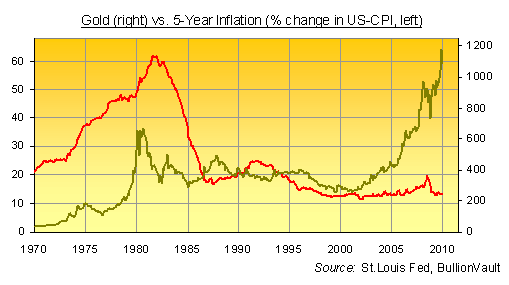 From the fall of 2004 to late-autumn 2009, the cost of living in the United States – as measured by the officially compiled Consumer Price Index – rose by just less than 14% all told.

Yes, the bean-counters drowned the numbers in ice to keep the CPI cool, but that rate was still barely half the 5-year pace averaged during gold's two-decade bear market of 1980-2000. Back then, gold fell from a month-end peak of $666 to $255 an ounce. Yet in the back-half of the Noughties, and with underlying consumer-price inflation little changed from the "Great Moderation" of the late '90s...at pretty much its lowest level since the mid-60s...the Gold Price somehow trebled and more for US investors, as well as for everyone else in the world.

Gold's rise of 2000-2010 didn't quite match the twenty-four-fold gains of the 1970s. But gold's decade-beating bull run to date – longer than ever the US stock market has managed – came against the lowest official US inflation since before Lyndon B.Johnson left the White House.

To repeat: Gold did not get, nor require, out-sized inflation to beat all other asset classes hands down. Yet still it makes news to assert that "Gold is a poor inflation hedge" as Harvard economist Martin Feldstein finally noted this month, peering through the wrong end of his telescope and finding the patently obvious to be awfully small and a long way away.

Gold was no hedge at all against the inflation of the 1980s and early '90s. Whereas it worked wonders against the even angrier price rises of the 1970s, only to beat all other investments again during the muted, near-gentle destruction of money's value so far this century. All of which means that expecting nailed-on inflation protection in gold is not to ask too much, but to ask the wrong question entirely.

And assuming gold must therefore plunge on deflation is wrong like pilchard-flavored ice cream.