END_OF_DOCUMENT_TOKEN_TO_BE_REPLACED

Contrary to selling half the UK's gold reserves, Gordon Brown is in fact a friend to gold...

DEFENDING YOUR SAVINGS in gold doesn't quite square with wanting to share your wealth with government bureaucrats. Which is why Socialist gold-owners are rarer than Tory foxes.

But should British gold investors, in May 2010, therefore vote against the man who ignored the Bank of England's best advice – and sold over half of the UK's gold reserves at the very lowest prices a decade ago?

Voting out Gordon Brown would in fact seem to go against the gold investor's best interests. Because "Dear Prudence" didn't only ring the bell at the bottom of gold's 20-year bear market. He also presided over the greatest credit bubble and bust since the South Sea Company, flooding the world with both Sterling and gilts, while making record-low interest rates a key plank of policy.

Not unrelated, the Gold Price in Sterling has quadrupled since his New Labour "prudence" took power. 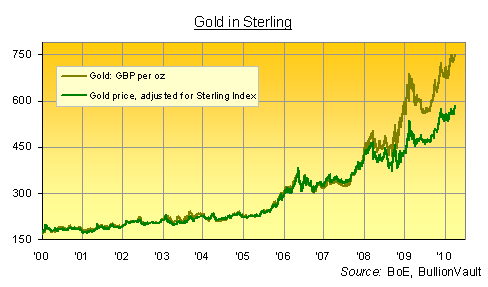 Real rates of bank interest, after inflation, have fallen sharply since Brown became Chancellor and "de-politicized" the Bank of England by giving it (apparent) discretion over interest rates.

Indeed, the real rate of UK interest has now averaged zero since June 2007 – just before the crisis caused by Brown's grace-and-favouritism towards the City's most bloated banks blew up.

Unsurprisingly, the Gold Price in Sterling has more than doubled investors over that time – and fully 25% of that gain has come thanks to Sterling's drop on the currency market. So backing more of the same might seem sound tactics for the floating voter blessed with a position in gold.

Private gold owners might want to think twice, however, before endorsing Labour's next five-year attack on the constitution and civil liberties. Because gold may well prove necessary, even with a Conservative government.

And let's face it, David Cameron is no Margaret Thatcher. 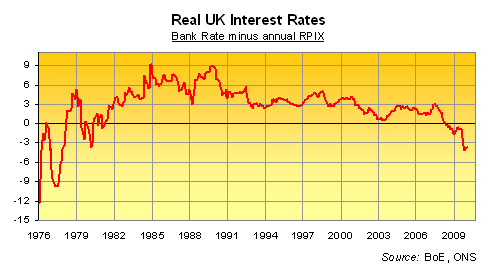 It took bank-deposit rates approaching 15% to rescue the Pound after the last Labour administration was thrown out. But that was only after a decade and more of destructive inflation had made tight money politically possible.

Near-double digits on the real – not nominal – return-to-cash were needed to make gold redundant as an inflation hedge. Whereas today, and for the foreseeable future, sound money remains quite literally unthinkable, whoever wins No.10 in May.