END_OF_DOCUMENT_TOKEN_TO_BE_REPLACED

AMID ALL the confusion online about quite how the Gold Market works – failing to square record retail demand with flat-to-falling US Dollar spot prices – one part of the international market continues to suffer what you might as well call "demand destruction".

Yes, the big Gold ETFs – such as GLD on the NYSE – are proving remarkably resilient as the broader stock market sinks. In the words of Adam Hamilton at Zealllc.com, shareholders in these trust structures "aren't anywhere near as skittish in a gold sell-off as many assumed they would be."

And yes, owners of physical Good Delivery bars – paying one-third or less the annual fees charged by the ETFs, but enjoying zero counter-party risk as well – continue to increase their holdings as well. Turnover here at BullionVault, for example, rose five times over in the year to end-Oct. The number of users rose almost three-fold.

But in the paper gold promises of Gold Futures and options, the collapse of gearing and credit-lines open to hedge funds and other highly leveraged players – the "Large Speculators" broken out in the CFTC's weekly data – has forced a collapse in volume. 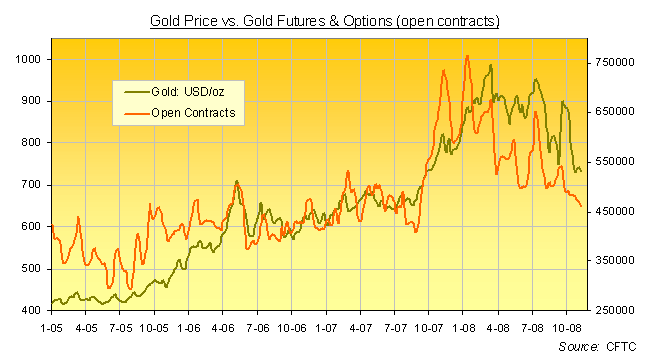 The relative loss of this froth – taking the outstanding "Open Interest" down by one-third since the start of this year – still failed to prevent gold making new all-time highs recently for Australian, British, Canadian, European, Indian and South Africa owners. Whereas a 10% drop in the number of crude oil contracts has seen the oil price drop by nearly two-thirds vs. the Dollar, and slump by one-half or more vs. everything else.

Thing is, of course, you can't trade the oil markets – much less take a long-term position – without trading derivatives. That brings brokerage and roll-over costs, not to mention the untimely threat of leveraged losses on top.

Whereas gold, if bought outright for cash, is still clearly gaining appeal for ever-more private and institutional investors. Perhaps the part about "no one's obligation, no one's liability" works best as a hook. It would explain the ongoing shortage in those retail gold products bought for cash and kept at home...which in turn (and with an eye on security, ready pricing and instant settlement) might explain the ongoing surge in new demand for accessing the wholesale "Spot Gold" market direct.

Meantime, the Large Speculators – shorn of the ready leverage offered by their investment-bank brokers – have been forced to slash their betting on gold. Net-long positions (the number of long minus short contracts they hold) have shrunk by almost three-quarters since the peak of mid-Feb. 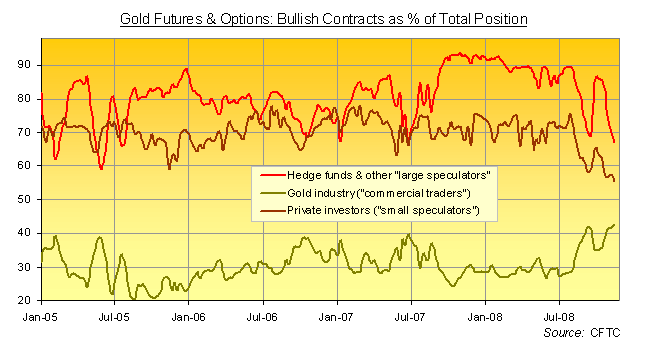 But the other side of the trade, in contrast – the "Commercial Traders" of refiners, fabricators, and wholesalers – now hold their most bullish position in Comex gold derivatives since Nov. 2001. And back then, as longer-term bulls will recall, the upturn in Gold Bullion prices was only beginning.

What might the industry know that leveraged gold traders can't guess, least of all while they're locked out of raising their bets...?