END_OF_DOCUMENT_TOKEN_TO_BE_REPLACED

How to insure yourself against the Fed's very own patented financial insurance...?

"The one sure way to prolong a depression is to resist it..."
– Walter Lippmann in the New York Herald Tribune, Sept. 1931

ISN'T MODERN LIFE GREAT? Nothing is ever anyone's fault anymore – but you can always reward your own damn-fool behavior by taking some other fool to court.

Hence Scott Anthony Gomez Jr., currently suing the sheriff of Pueblo County in Colorado. Gomez was able to break out of his jail cell, push up a ceiling tile, and crawl to freedom through the ventilation shafts.

But then he slipped and fell 85 feet off the roof of his prison – and Gomez's second break-out in two years clearly showed "the defendants did next to nothing to ensure that the jail was secure and the plaintiff could not escape," says his lawsuit.

That's why the jailbird is seeking $64,000 or more to cover his medical bills.

Just to the north in Saskatchewan, meantime, a 23-year old former drug addict sued her dealer this month – and successfully – after paying him $40 for what she claims was only a $30 hit of crystal meth.

The crank was so good, Sandy Bergen then suffered a heart attack and spent 11 days in a coma. More than got what she came for!

But "the point is [the dealer] caused this problem, and he should have to pay," argued Ms.Bergen's lawyer. Bizarrely, the court agreed – and not without precedent.

"There have already been similar cases in the United States," says The Vancouver Sun, "where more than a dozen states have passed a Drug Dealer Liability Act."

And over in the financial markets all this while, "on the fundamentals it is very difficult to identify the disconnect between the external and internal perceptions of our strength," moaned Michael Callen, CEO of Ambac Financial in a conference call on Tuesday.

We're not sure who Callen is suing just yet. If we're not careful, it might just be us here at BullionVault...! 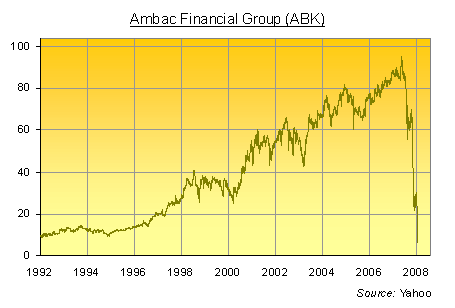 But Fitch, Moody's and Standard & Poor's must look a good mark – and not only for the ailing bond-insurance giant.

"The complexity of structured products, as well as the difficulty of determining the values of some of the underlying assets, led many investors to rely heavily on the evaluations [from these] credit-rating agencies," said Ben Bernanke at a luncheon this month.

But like the Fed chairman then explained to the diners from Women in Housing, "as subprime mortgage losses rose to levels that threatened even highly-rated tranches [of bonds], investors began to question the reliability of the credit ratings, and became increasingly unwilling to hold these products."

Hence the downgrading of Ambac's own corporate bonds at the end of last week. More like Fitch playing catch-up than a proactive cut, the loss of "triple-A" status can only hurt the bond insurer from here. But that can't be allowed, of course. Just like the credit insurance business it leads with MBIA, Ambac is simply too big to fail.

Thus this week's call from the New York insurance regulator for leading banks to put $15 billion into Ambac, MBIA and the other top "monoline" insurers. They stand behind $2.4 trillion in bonds worldwide, including corporate debt, mortgage-backed bonds and a good chunk of US municipal borrowing. ABK's stock shot more than 70% higher on the news – and a good thing, too.

You see, the global banking crisis is not Mike Callen's fault. On Ben Bernanke's logic, in fact, no one's to blame. No, that won't stop the bubble in lawsuits as investors and dealers demand recompense for the risks they just happened to take because, well, because everyone else was at it.

But at least under the New York state's plan, the insured will now insure the insurers, and everything will work out just fine. Right?

"Class-action filings spiked earlier this decade, jumping to 497 in 2001 from 215 the year before," reports the New York Times. It guesses that the number of post-housing lawsuits will dwarf what followed the Enron collapse.

Why don't investors – insured if not insuring Ambac – cut straight to the chase and sue Ben Bernanke, or even the Sub-Maestro's mom?

That boy never did learn to clean up his own mess. Why did nobody teach him? And to think he even lied about trying with the lowest peak in Fed rate-hiking since 1960... 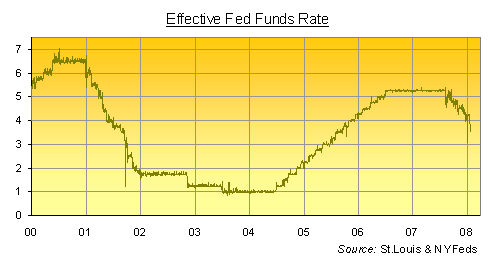 "History proves that a smart central bank can protect the economy and the financial sector from the nastier side effects of a stock market collapse," claimed Bernanke in October 2000.

The Tech Bubble was collapsing right then, but the Fed's young advisor blamed no one, least of all the Federal Reserve. Bubbles are too hard to spot in advance. Cleaning up after is the only way to respond.

So the Fed followed history – or rather, Bernanke's reading – and got to look smart by slashing US interest rates down to just 100 basis points by mid-2003.

Now no one would suffer the "nastier side effects" of the Nasdaq's 75% crash. Nausea and light sweating would only kick in when the bubbles that followed, in housing and finance, blew up in their turn four years later.

Lost all your retirement savings? Just move into housing. Missing your stock-broker's bonus? Move into fixed-income, and start pumping mortgage-backed bonds quick. The cheapest money in 45 years would underwrite growth in whatever assets you picked. No wonder Gold Prices trebled on this diet of "side-effects" cures.

"As a matter of theory," Bernanke would go on in late 2002, "it is rarely the case in economics that the optimal amount of insurance in any situation is zero." By now, however, he was booked for the top – and the insurance he spoke of wasn't cover against the risk of credit default or mortgage foreclosure, but nationwide cover against letting new bubbles develop.

Even as the new Fed governor spoke in Oct. '02, the stock-market was turning higher at last. House prices, up by one-third in three years, would almost double on average by mid-2006. But Bernanke argued against insuring the economy from investment manias, because it would not be worth the premiums. Raising interest rates to deflate any bubbles would instead curb GDP growth – and a sub-par economy is never fair value.

The Fed's better course, according to Ben, was to use its "regulatory, supervisory, and lender-of-last resort powers to help ensure financial stability." Just like he did as the subprime boom bubbled, supervising and regulating Goldman Sachs – for example – as it issued a subprime-backed bond in which 58% of the mortgage loans were no-doc or low-doc. (Eighteen months after it floated, one in six of the bond's 8,274 mortgages had gone into default.)

One small group of people sought out insurance regardless of Bernanke's theory, and they chose to keep Buying Gold. It's since proven the most effective cover to date against the Fed's very own insurance product, the infamous "Greenspan Put" itself... 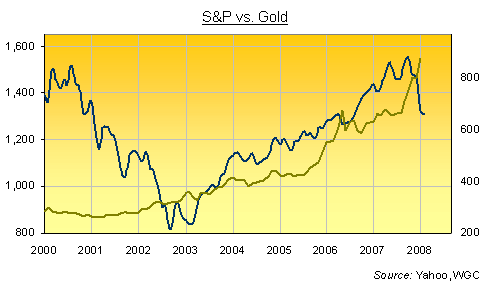 "Without policy blunders by the Federal Reserve," Bernanke decided while he still wore short trousers, "there is little reason to believe that the 1929 crash would have been followed by more than a moderate dip in US economic activity."

Blinding insights on which to build a career, and an outright rejection of William McChesney Martin, Fed chairman for 20 years in the mid-20th century, who claimed it was the central bank's job to "take away the punchbowl just when the party gets going."

But controversy and celebrity only go so far when the grand sweep of history is your specialist subject. What if Bernanke's expertise remained academic? How to prove his great brains...without first provoking a new banking crisis just to test-drive his theory?

"The reason why we've had such large declines [in world stock markets] is the unwinding of leveraged positions," reckons Bob Parker, deputy chairman of Credit Suisse Asset Management.

"If you look at activity in the hedge fund markets," he told Bloomberg this week – "and you can see this in the performance data – the long-short funds had built up a long bias. So consequently I think that long bias has been kicked out.

"It's also worth noting that, over the last two or three years, investors have bought a lot of capital protected products. The way they work, again, is with stop losses. For that capital protection to work, whenever there is a risk position in global equities [then] if you have a sharp movement down, that automatically kicks out that risk position. That's why you're seeing such large declines."

Long-short equity funds try to balance risk in the hope of negating it; stop-losses exist to limit your losses when the market turns south. With the right risk protection in place, the world thought, you can abolish risk altogether. Failing that, you can call on the idiots who insured your fool-hardy risk taking. Failing that, you can always take someone to court. And failing that, there's always Ben Bernanke at the Fed – the Sub-Prime Maestro himself – ready to destroy the Dollar to keep your performance on track.

It's his job to keep bubbles running long after they burst, remember. And if you ever find yourself with a nasty coke habit, he's just the man to start selling you crack.