END_OF_DOCUMENT_TOKEN_TO_BE_REPLACED

How to get a jump on the big central banks as interest rates race towards zero worldwide...

OF SIX CENTRAL BANKS voting on interest rates this week, only the European Central Bank in Frankfurt failed to reduce its cost of money to either record or multi-year lows, holding rates steady at 2.0%.

The result for Eurozone investors? Gold leapt to a new record high by the PM Gold Fix in London, recording a new all-time high above €719 an ounce.

Big picture? That puts the Gold Price right back at its long-term high for European cash savers, as measured by the old pre-Euro war-horse, the lost and lamented German Deutsche Mark. 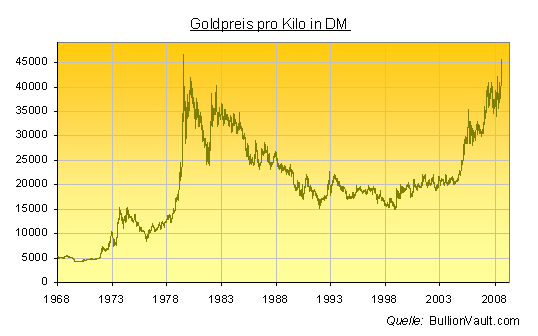 British gold buyers saw the price surge to £662 an ounce in January – up by 100% from just 18 months earlier. Because as the UK Pound Sterling slid on the forex market, gold proved itself as the ultimate hedge amid a currency crisis.

Now the Euro looks ripe for coming under "speculative attack" from currency traders trying to get even. The Dollar-Yen shock starting in summer 2008 whacked pretty much all asset classes. But the biggest losers by far were those currency gamblers still backing the favorites – those fillies sporting the best rates of return – as the going switched from 'good' to 'heavy'.

During the previous half-decade, the interest-rate gap had paid time and again. Sell the Dollar – and dump the Yen! – in exchange for anything bearing a strong or rising interest rate payment. But the bottom fell out of this strategy in mid-2008. Racing first to the bottom, the Japanese Yen (zero-hour: May 2001) was then first out of the blocks when debt needed redemption, and currency gamblers all scrambled to cover their shorts. Close on its tail came the almighty Dollar (zero-hour: Dec. 2008)...and thus a new form-guide emerged amongst currency traders.

That's why, when early in Prague today the Czech central bank slashed its interest rates to an all-time low, the Czech Koruna actually bounced vs. the Euro...

That's why, midday here in London, the Bank of England took its base rate further into record-low territory at 1.0%...yet currency traders pushed the Pound Sterling to a two-week high above $1.4650...

That's why on Tuesday, when the Reserve Bank of Australia cut its interest rate to a 45-year low, the Aussie Dollar bounced from near-6 year lows in response...

That's why on Wednesday, after the central bank of Norway cut its target interest rate by 50 basis points to 2.50%, the Norwegian Krone turned higher after losing one-third of its value vs. the Dollar since July last year...

And that's also why, on Thursday – when the world's No.2 behind the Fed, the European Central Bank (ECB), opted to keep its rates flat – the Euro lost 2¢ from this week's high to trade below $1.2850...despite paying returns to cash fully 200 basis points above the Dollar.

Priced in Euros, the value of gold – which yields nothing already, but also carries no counter-party or inflation risk – rose to €720 an ounce, more than 14% higher for 2009 to date.

In short, Thursday's foreign exchange action confirms the currency markets' perverse verdict on falling premiums. First seen last year as the US Fed and Bank of Japan cut their rates to zero and their currencies leapt, this deflation-bent view of lower interest rates says that rewarding debtors – rather than savers – is beneficial to a currency's future. Whereas failing to cut is a negative.

So if we were in the business here at BullionVault of making short-term calls on the currency markets (which we're not, of course; we just enable private individuals to buy and sell gold – securely – at the tightest possible prices), we'd expect the Euro to suffer right up until the ECB next meets in March....or until currency traders start taking ECB chief Jean-Claude Trichet at his word and begin pricing in record-low Eurozone rates ahead.

"I don't exclude that we could reduce interest rates at our next decision," Trichet told a new conference after today's "No change" decision.

Asked whether he'll go for a half- or quarter-point cut, M.Trichet replied "It would probably more be the first figure."

You tell 'em Jean-Claude! And once the Euro starts paying "probably more" like zero than not, what next for the currency markets to kick around? The Yen...? The Dollar...? Everything and everyone all at once...?

In this race to the bottom – which even the "inflation-vigilant" European Bank now says it will join – private investors with something to lose might want to get a jump on the currencies, and move straight into zero-yielding Gold Bullion.

After all, gold has already proven its value as a "currency crisis" defense for UK investors this year. If all currencies tip into crisis together, we'd guess that defense will quickly trade sharply higher.