END_OF_DOCUMENT_TOKEN_TO_BE_REPLACED

Gold up, Dollar down, right? Wrong...

Well, no actually. As BullionVault has repeatedly noted, and never less than when clutching a whisky and ginger this past Yuletide...typically to a fast-emptying room...the last 10 years of rising Gold Prices has been about much more than the ailing Dollar, sick as it is.

Gold's tripling-and-more since Tues 4th Jan. 2000 in fact came against all major currencies, let alone the minor ones. Indeed, when judged against a truly globalized basket of the globe's truly basket-case currencies – those various monies issued by the top 10 economies in terms of Dollar-GDP – the Gold Price turned decisively higher in mid-2001...looking back only a handful of times and never for more than a 20% drop.

All about the Dollar? Not on our Global Gold Index. 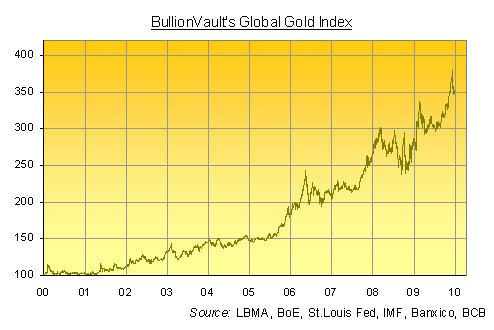 Yes, volatility and violence rose together as the Gold Price pushed higher. And yes, the Dollar-price gains outstripped those in the Euro (292% vs. 180%) and commodity-led Canadian Loonie (179%).

But your local fund managers, financial advisors and op-ed pundits would have been hard-put to beat those returns with anything else. And as gold remains (at least in the view of die-hard, gloating and lone-drinking "gold bugs") the only viable one-world currency, it's worth glancing at just how it performed against the last decade's various top 10 monies by economic weight...

* NB: The GGI is rebased for the top 10 currencies by economic output each year. The 13 gold-lagging currencies above all made one appearance (or more) in the last decade's data. 2009 positions given here, courtesy of the IMF. The US accounts for 32%, the Eurozone 27%.

Of course, no one much cares for the last 10 years of data, however – not outside the relative performance tables of mutual fund sales teams.

But whether you think gold warned of trouble ahead when it first doubled to the start of 2006...or you feel it merely worked-as-prescribed when it almost doubled again during the financial crisis that then followed...it's clear that the Decade of Gold just ended was a long way from a "Dollar down" story alone.

And all this without the much-fabled price inflation which newcomer pundits believe is essential for a long-term rise in the Gold Price. Just imagine what the price might do from here if a true surge in the cost of living now shows up worldwide.