END_OF_DOCUMENT_TOKEN_TO_BE_REPLACED

Ten, even five years ago and less, precious-metals analysts thought rising incomes in Asia would see gold substituted for other financial services or consumer goods. But no. China's private demand has more than doubled as a proportion of gross household savings. Based on the World Gold Council's latest data – issued today in the market-development and research group's new Gold Demand Trends report – India's private consumption jumped in 2010 to a new all-time record of more than 963 tonnes.

That volume beggars belief. It's equal to 2.65% of GDP on the International Monetary Fund estimate. On BullionVault's own analysis, it equated to more than 11.5% of India's gross household savings. 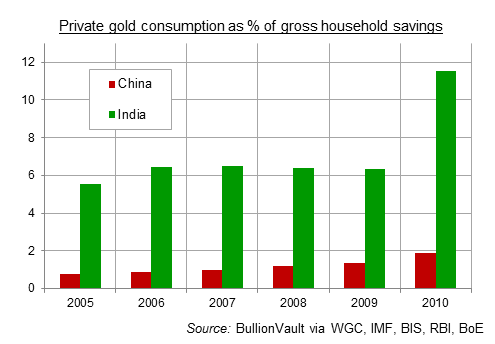 Yes, the WGC's data are subject to revision, of course, and they can only ever be an estimate.

But for Western savers hoping to defend their standard of living, it's plain commonsense to consider buying a little of what Asian households are using to store ever more of their fast-growing wealth.

You can forget about central banks impacting the market – net gold buyers in 2010 though they were, as a group, for the first time in two decades. Don't dwell on "safe-haven" Western demand either...other than to note how new Gold ETF demand and "unallocated" trading in the wholesale, off-exchange market both slipped 45% from 2009's record highs, while coin and bar demand surged worldwide. Because Indian and Chinese households are the knock-out story from 2010's data. The world's two most populous nations, its fastest-growing major economies, and numbers one and two for physical gold buying, both India and China set new records for private gold demand by value and volume in full-year 2010. On our reading of the new World Gold Council data, per capita consumption also set fresh records in the top two demand countries.

How come? Just as in gold's developed-world bull market of the 1970s, rising inflation and sub-zero real rates of interest are setting the pace. Productivity and real household wages are rising, however, in sharp contrast to the economic path which the rich West took four decades ago. So Asia's deep love of gold – and ever-deepening pockets – suggests perhaps a different path from the post-bubble slump which gold prices suffered as Western economies recovered and grew during the 1980s and '90s. Because emerging Asia buys gold when times are good.

Developed-world Gold Investment rose amid the financial crisis starting 2007, even as world jewelry demand sank. Emerging Asia tempered and even reversed its buying as global GDP turned down, with private consumers in India – a net importer every year since the Great Depression (the world's No.1 consumer has got virtually no domestic mine output) – actually becoming net exporters of gold in the first quarter of 2009.

The economic rebound, so much more pronounced in emerging Asia than the rich West, has seen those trends switch over. Because even with the Eurozone deficit crises driving a jump in physical demand for Gold Bars and coin (particularly in Germany), net demand for new units of gold ETF shares actually slipped 45% from 2009's record. So too did "unallocated" trading in London's wholesale market.

You've got to go a long way to over-state the strength of physical gold demand in 2010. The Dollar price rose 26%, but total global demand still grew 9% by volume, hitting its highest tonnage since the long bear market of the 1980s and '90s hit rock-bottom in 2000.

Gold then averaged $279 per ounce, rather than 2010's average of $1224. Yet in tonnage terms, global physical demand – led by emerging Asia's big giants – was like the bull run hadn't even got started.

Buying Gold for your long-term savings today? Get the safest gold at the lowest costs using the awarding-winning world No.1 online, BullionVault...